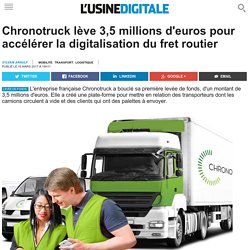 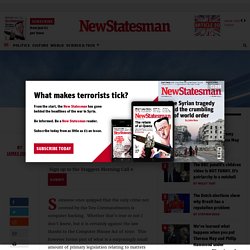 Whether that’s true or not I don’t know, but it is certainly against the law thanks to the Computer Misuse Act of 1990. This however forms part of what is a surprisingly small amount of primary legislation relating to matters digital, particularly when one considers the impact that technology has had on almost every aspect of our lives in the last twenty or so years. Governing the Digital Economy. Cities policy key to digital economy. In the fast evolving digital economy, smarter cities policy will drive the nation’s ability to both innovate and compete in global markets, as well as provide the platform for economic growth. 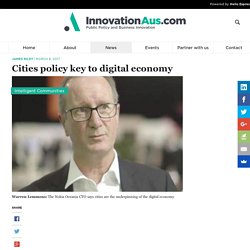 Whether they are metropolitan or regional, cities are already the essential engines for economic output. But the opportunities in the digital economy should put cities at the centre of economic planning. Solactive launches digital economy index. Frankfurt-based index provider Solactive has launched the Solactive Digital Economy Index, which tracks the performance of 50 European stocks whose business models are likely to impacted by the process of digitisation. 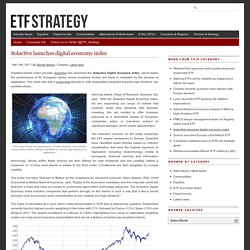 The index also has a smart beta tilt built in, with composition weighted towards high dividend, low volatility stocks. The index tracks the performance of high dividend, low volatility stocks within seven themes identified as having high exposure to digitisation. Is the digital economy in danger of becoming the taking economy? Sharing economy firms like Uber and Airbnb may be leveraging their access to information, gained by facilitating trusted transactions between strangers on a digital platform, to disadvantage their participants and avoid regulation according to a new research paper co-published by a law professor and a technology ethnographer at the University of Washington. 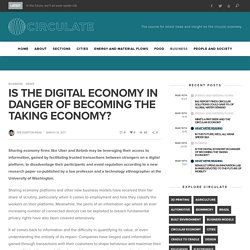 Sharing economy platforms and other new business models have received their fair share of scrutiny, particularly when it comes to employment and how they classify the workers on their platforms. Meanwhile, the perils of an information age where an ever increasing number of connected devices can be exploited to breach fundamental privacy rights have also been covered extensively.

It all comes back to information and the difficulty in quantifying its value, or even understanding the entirety of its impact. What the paper illuminates clearly is that information is a key profit and power mechanism in the market. Google expands its African initiatives. Alphabet is committing to training another 1 million students under its Digital Skills for Africa program in the next 12 months, the company said at events in Lagos, Nairobi, and Johannesburg. 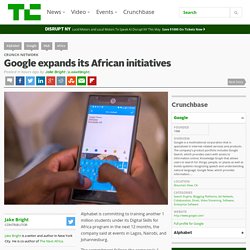 The commitment follows the company’s 1 million mark milestone reached today and follows the opening of Google’s Launchpad Accelerator for African startups earlier this month — tracking a growing presence by the global internet services firm on the continent. Debuted in April 2016 with a goal of training 1 million within a year, Digital Skills for Africa offers online and face to face instruction to individuals and small businesses through 14 partners across 27 African countries.

Anyone can register for free and set an individualized plan across three primary categories: business development, career advancement, or basic internet use. Marketing 4.0 in the digital economy: Moving from traditional to digital marketing. From segmentation and targeting to customer community confirmation Traditionally, marketing always starts with segmentation—a practice of dividing the market into homogenous groups based on their geographic, demographic, psychographic, and behavioral profiles. 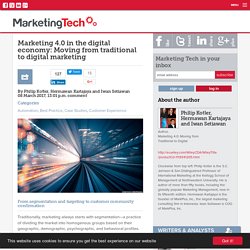 Segmentation is typically followed by targeting—a practice of selecting one or more segments that a brand is committed to pursue based on their attractiveness and fit with the brand. Segmentation and targeting are both fundamental aspects of a brand’s strategy. They allow for efficient resource allocation and sharper positioning. They also help marketers to serve multiple segments, each with differentiated offerings. However, segmentation and targeting also exemplify the vertical relationship between a brand and its customers, analogous to hunter and prey. By having countless logo adaptations, MTV and Google remain solid yet flexible as brands To effectively engage with a community of customers, brands must ask for permission. Budget Push for a Digital Economy-Krishan Kumar - BW Disrupt. Indian Government has embarked on the journey of transforming Indian Economy into a Digital Economy. 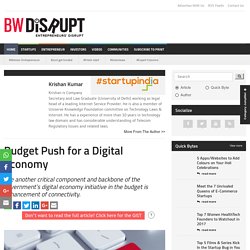 Funding to help small businesses jump in to the digital economy Sunshine Coast. Digital economy: What is Modi government's cashless drive all about? - The Financial Express. The payments system was launched in August 2016 by state-run National Payments Corporation of India, but its adoption by banks and customers remained sluggish. 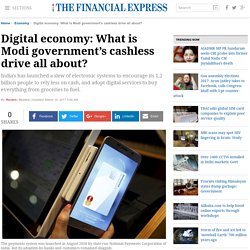 India’s has launched a slew of electronic systems to encourage its 1.2 billion people to rely less on cash, and adopt digital services to buy everything from groceries to fuel. Here is an overview of India’s cash-less initiatives. United Payments Interface (UPI) The real push for UPI came after Prime Minister Narendra Modi launched the flagship UPI app called BHIM on Dec. 30. Big data lab to boost digital economy - Business. India a great destination for building digital economy infrastructure: Payoneer CEO Scott Galit. The world is shifting towards digital economy and it is changing countries and people across the globe. 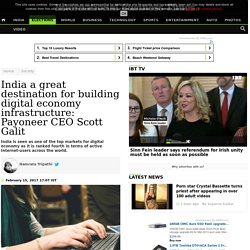