The Incredible Jun: A Town that Runs on Social Media. Expert: Today’s children will need to work until the age of 100 at 40 different jobs. Job seekers attend a job fair for middle-aged and elderly job seekers in Hong Kong, China, Sept. 30, 2015. 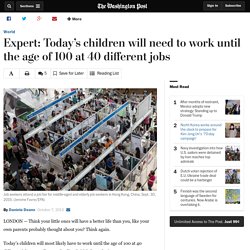 Strategic directions. DUP GlobalHumanCapitalTrends2016. The four megatrends behind the Trump phenomenon - CapX. Get support from big wigs in the state Republican party – your Congressmen, the Senators, and, ideally, the Governor. 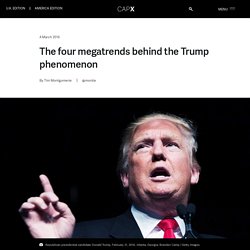 Amass a warchest – by endlessly robocalling donors and attending fundraising suppers – with which you can afford negative TV ads through which you define and destroy your opponent. You may need to spend up to 70% of your time raising funds – it’ll be at least 30%. Get endorsements from local right-to-life chapters, the chamber of commerce, gun rights groups, evangelical charities and other conservative movement organisations by proving your ideological credentials. Get articles in local newspapers and ideally positive coverage in the two pillars of the conservative media establishment – the Wall Street Journal and Fox News. 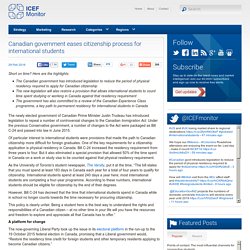 Here are the highlights: The Canadian government has introduced legislation to reduce the period of physical residency required to apply for Canadian citizenshipThe new legislation will also restore a provision that allows international students to count time spent studying or working in Canada against that residency requirementThe government has also committed to a review of the Canadian Experience Class programme, a key path to permanent residency for international students in Canada The newly elected government of Canadian Prime Minister Justin Trudeau has introduced legislation to repeal a number of controversial changes to the Canadian Immigration Act.

Under the previous Conservative government, a number of changes to the Act were packaged as Bill C-24 and passed into law in June 2015. Of particular interest to international students were provisions that made the path to Canadian citizenship more difficult for foreign graduates. This policy is clearly unfair. Government Goes Agile. People from an 18F team conduct a workshop with clients from the US Federal Election Commission. 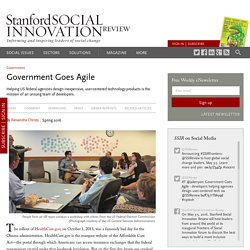 (Photograph courtesy of the US General Services Administration) The rollout of HealthCare.gov, on October 1, 2013, was a famously bad day for the Obama administration. HealthCare.gov is the marquee website of the Affordable Care Act—the portal through which Americans can access insurance exchanges that the federal government created under that landmark legislation. But on the first day, heavy use crashed the site repeatedly, and those who managed to reach the site encountered further frustration when they tried to use it. Ultimately, only six people were able to enroll in an insurance plan before the day was out. More than 50 contracting companies took part in developing HealthCare.gov, and their work cost US taxpayers nearly $800 million.

And he should know. Virtual reality could be an ethical minefield – are we ready? Courtesy of JGU Pressestelle Thomas Metzinger is a philosopher at the Johannes Gutenberg University in Mainz, Germany, who specialises in the philosophy of mind and neuroscience. 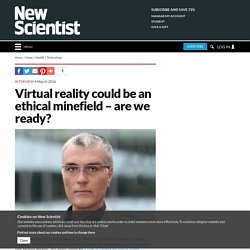 He is co-author, with Michael Madary, of a paper calling for a code of conduct for virtual reality. Why do we need an ethical code of conduct for virtual reality? Report: 6 Tech Trends that Embody the Future of Higher Ed. Researchers studying the future of technology in higher education have pinned down the six key trends that will shape the coming years. 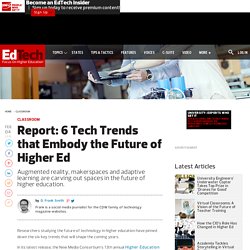 In its latest release, the New Media Consortium’s 13th annual Higher Education Edition Horizon Report includes findings based on surveys conducted with 58 technology and education experts on the future of the industry. These can be boiled down into six key trends, six significant challenges and six important developments in educational technology. Student mental health: a new model for universities. Going to university is never easy. 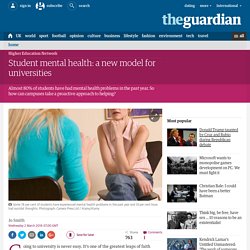 It’s one of the greatest leaps of faith anyone ever makes, and it comes at a vulnerable time in an individual’s psychological development. It is difficult, and for some it can be life-threatening. A recent survey found that 78% of students reported having had a mental health problem over the past year, and 33% had had suicidal thoughts. Is 'Grit' Doomed To Be The New Self-Esteem? : NPR Ed. In just a few short weeks, students in California will be taking high-stakes tests. 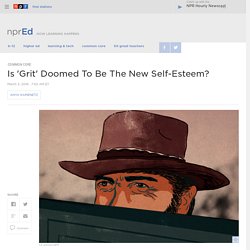 But the tests won't just cover math, reading and science. Students will also be responding to survey statements like "I usually finish what I start," or "I can do anything if I try. " A group of big-city districts there is among the first to try to measure students' self-control, empathy and other social and emotional skills — and to hold schools accountable for the answers. The new federal education law requires states to include at least one non-academic outcome in their accountability formulas, so these kinds of tests are likely to become more common nationally. Higher Ed Big Data Dives Could Be the Answer to Retention Problems. There's a problem with higher ed retention, and data could provide a solution. 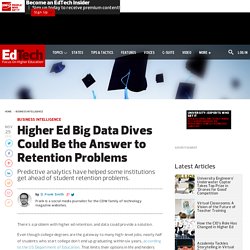 Even though college degrees are the gateway to many high-level jobs, nearly half of students who start college don't end up graduating within six years, according to the US Department of Education. That limits their options in life and hinders enrollment growth at higher education institutions. Connected Credentials and Competencies: New Insights.