Man vs Machine: Robots are replacing workers in auto plants in India, Auto News, ET Auto. MUMBAI: One recent afternoon at Ford Motor Co's plant in Sanand, Gujarat, a team of workers gathered around a bunch of vehicles assembled as soldiers would for a military parade. 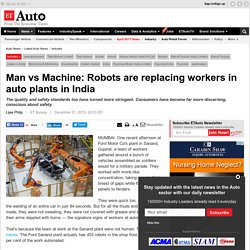 They worked with monk-like concentration, taking care to fill the tiniest of gaps while fixing door panels to fenders. They were quick too, completing the welding of an entire car in just 84 seconds. But for all the thuds and clanks they made, they were not sweating, they were not covered with grease and soot, nor were their arms dappled with burns — the signature signs of workers at automobile plants. That's because the team at work at the Sanand plant were not human. They were robots.

Robots have begun to take over an array of functions from humans at car plants in India. Robots are performing functions ranging from welding to foundry operations to laser applications. In many ways, the rise of the robots in automobile manufacturing was inevitable. Robots replacing human factory workers at faster pace. Cheaper, better robots will replace human workers in the world's factories at a faster pace over the next decade, pushing manufacturing labor costs down 16%, a report Tuesday said. 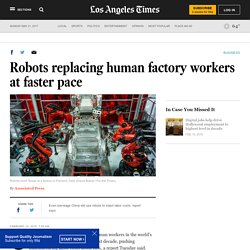 The Boston Consulting Group predicts that investment in industrial robots will grow 10% a year in the world's 25-biggest export nations through 2025, up from 2% to 3% a year now. The investment will pay off in lower costs and increased efficiency. Robots will cut labor costs by 33% in South Korea, 25% in Japan, 24% in Canada and 22% in the United States and Taiwan. Why are Japanese cars supposed to be more reliable? - Car Keys. Back in the 1980s, Japanese car manufacturers cultivated a reputation for building bulletproof cars that exceeded the reliability expectations of virtually all of their competition at the time. 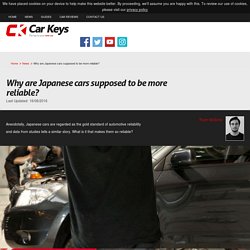 The American and European markets were still sceptical of Japanese-built cars, but gradually manufacturers like Toyota, Honda and Nissan gained a foothold outside of their domestic markets, largely thanks to the positive association with building long-lasting vehicles. Although the gap in quality has narrowed in recent years, data shows that Japanese brands still lead the field when it comes to reliability. Seven out of the top 10 reliable carmakers in the 2015 Auto Express Driver Power survey were from Japan, and around a third of the Reliability Index’s top 100 cars are Japanese. But why is it that Japanese brands rank so highly in terms of reliability? What is it that Japanese engineers and manufacturers have that the rest of the world is trying so hard to catch up with? Toyota Production System. How Detroit's Automakers Went from Kings of the Road to Roadkill. 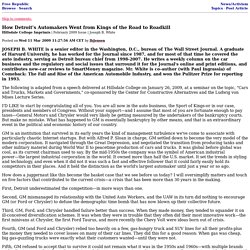 How Detroit's Automakers Went from Kings of the Road to Roadkill Hillsdale College Imprimis | February 2009 Issue | Joseph B. White Posted on Wed 11 Mar 2009 11:27:56 AM CET by IbJensen JOSEPH B. WHITE is a senior editor in the Washington, D.C., bureau of The Wall Street Journal. Snyder - More than $12 million in skilled trades training funds will help create over 3,100 jobs, retain 10,000 others. More than 350 employers to benefit from FY 16 awards Wednesday, Nov. 25, 2015 LANSING, Mich. – More than 13,000 job-seekers and workers will receive training for in-demand technical jobs through grants totaling $12.8 million awarded under Michigan’s Skilled Trades Training Fund, Gov. 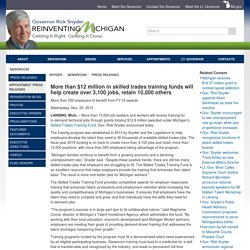 Rick Snyder announced today. The training program was established in 2013 by Snyder and the Legislature to help employers develop the talent they need to fill thousands of available skilled-trades jobs. The fiscal year 2016 funding is on track to create more than 3,100 jobs and retain more than 10,000 positions, with more than 350 employers taking advantage of the program. “Michigan families continue to benefit from a growing economy and a declining unemployment rate,” Snyder said. The Skilled Trades Training Fund provides competitive awards for employer-responsive training that enhances talent, productivity and employment retention while increasing the quality and competitiveness of Michigan’s businesses. Detroit and Deindustrialization. 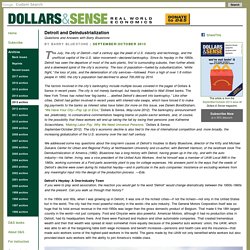 Questions and Answers with Barry Bluestone By Barry Bluestone | September/October 2013 This July, the city of Detroit—half a century ago the jewel of U.S. industry and technology, and the unofficial capital of the U.S. labor movement—declared bankruptcy. Anatomy of Detroit’s Decline - Interactive Feature. Mayor Coleman A. Young of Detroit at an event in 1980.

Richard Sheinwald/Associated Press The financial crisis facing Detroit was decades in the making, caused in part by a trail of missteps, suspected corruption and inaction. Here is a sampling of some city leaders who trimmed too little, too late and, rather than tackling problems head on, hoped that deep-rooted structural problems would turn out to be cyclical downturns. Charles E. Blssummary detroit. Last Car Plant Brings Detroit Hope and Cash.