The Death Penalty has no place in a civilised society, when will America abolish it? By Sonia Poulton for the Daily Mail Published: 12:13 GMT, 26 April 2012 | Updated: 12:14 GMT, 26 April 2012 This Sunday, as part of their annual peaceful protest, the group Voices for Deathrow Inmates, will gather outside of the American Embassy in London. 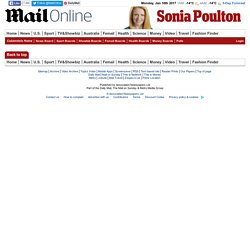 During the day-long protest, supporters will light scented candles, raise their 'Hankies of Hope' tapestry containing the names of American prisoners - some exonerated and some executed - and will sing songs of peace and love for both victims and perpetrators. Orange balloons and ribbons - the colour of oppression and, interestingly, also the shade of the jumpsuits worn by inmates when they are moved from one place to another - will be in abundance. Come rain or shine, these ardent campaigners will hold one minutes silence and listen to sentiments of wisdom from a range of speakers including advocates of former Death Row inmates and international abolition activists. And, because I support their aims, I will be speaking there, too. How the Drug Shortage Has Slowed the Death-Penalty Treadmill.

Last year, during a U.S. 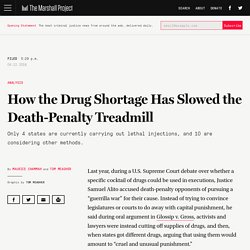 Supreme Court debate over whether a specific cocktail of drugs could be used in executions, Justice Samuel Alito accused death-penalty opponents of pursuing a “guerrilla war” for their cause. Instead of trying to convince legislatures or courts to do away with capital punishment, he said during oral argument in Glossip v. Gross, activists and lawyers were instead cutting off supplies of drugs, and then, when states got different drugs, arguing that using them would amount to “cruel and unusual punishment.” Opponents of the death penalty have taken exception to the term “guerilla war” — they see their work as a legitimate effort to save individual inmates from the kinds of botched executions that have made the news recently. But if it is a war, they are clearly winning. There was already a decline in executions — to 52 in 2009 from a high of 98 in 1999 — but the drug issues helped the number drop further, to 28, last year. 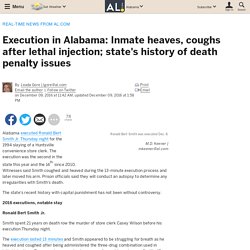 Keener | mkeener@al.com Alabama executed Ronald Bert Smith Jr. Thursday night for the 1994 slaying of a Huntsville convenience store clerk. The execution was the second in the state this year and the 14th since 2010.Witnesses said Smith coughed and heaved during the 13-minute execution process and later moved his arm. Prison officials said they will conduct an autopsy to determine any irregularities with Smith's death. The state's recent history with capital punishment has not been without controversy. 2016 executions, notable stay Ronald Bert Smith Jr. Smith spent 21 years on death row the murder of store clerk Casey Wilson before his execution Thursday night. The execution lasted 13 minutes and Smith appeared to be struggling for breath as he heaved and coughed after being administered the three-drug combination used in lethal injections. Smith's attorneys had sought to prevent the execution based on the state's three-drug method of execution.

Readings - History Of The Death Penalty. As far back as the Ancient Laws of China, the death penalty has been established as a punishment for crimes. 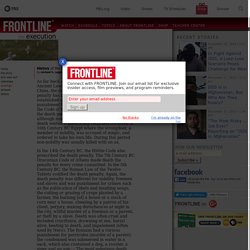 In the 18th Century BC, the Code of King Hammurabi of Babylon codified the death penalty for twenty five different crimes, although murder was not one of them. The first death sentence historically recorded occurred in 16th Century BC Egypt where the wrongdoer, a member of nobility, was accused of magic, and ordered to take his own life. During this period non-nobility was usually killed with an ax. In the 14th Century BC, the Hittite Code also prescribed the death penalty. The 7th Century BC Draconian Code of Athens made death the penalty for every crime committed. Mosaic Law codified many capital crimes. Britain influenced the colonies more than any other country and has a long history of punishment by death.

In Britain, the number of capital offenses continually increased until the 1700's when two hundred and twenty-two crimes were punishable by death. Wilkerson v. Arguments. Death Penalty Resources.