The 15 Fashion Brands that Do Social Media Best - Fashionista. You'd be hard-pressed to find a fashion label that doesn't have at least a speck of a social media presence. 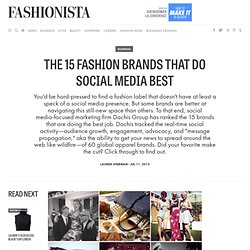 But some brands are better at navigating this still-new space than others. To that end, social media-focused marketing firm Dachis Group has ranked the 15 brands that are doing the best job. Dachis tracked the real-time social activity—audience growth, engagement, advocacy, and "message propogation," aka the ability to get your news to spread around the web like wildfire—of 60 global apparel brands. Did your favorite make the cut? Click through to find out. 15. 14. 13. 12. 11. 10. 9. 8. Fashion Brands Push Social Media Ads - Advertising - Media. When it comes to online advertising, the medium is definitely the message. 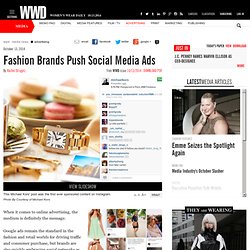 Google ads remain the standard in the fashion and retail worlds for driving traffic and consumer purchase, but brands are also quickly embracing social networks as viable advertising channels. Facebook — which reported second-quarter revenues of $2.91 billion, predominantly driven by advertising — leads the pack, followed by Twitter, Pinterest, Instagram and, soon to come, Snapchat. Nate Elliott, vice president and principal analyst at Forrester Research, said he would still advise fashion and retail brands to spend online advertising dollars on Google’s search ads versus social-media ads. This isn’t to say that brands should cease their spending on sites such as Facebook — he is not encouraging that — but he does urge marketers to evaluate online ad budgets the same way they would for other types of advertising.

“The fact is that we’re an image-conscious business. “There’s a lot of earned value in a Promoted Pin. Zara rastreada. Apple iWatch at PFW - Paris Fashion Week Accessories iWatch. Here's how serious Apple is about fashion: Not only has the tech company hired two ex-fashion execs (former Burberry CEO Angela Ahrendts to run Apple’s retail and online stores, and former Yves Saint Laurent CEO Paul Deneve to work on “special projects”) but it's also dominating the fashion month schedule. 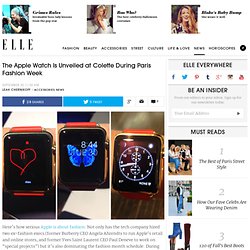 During New York Fashion Week, Apple flew editors to its Cupertino headquarters to preview the watch and iPhone 6. Today, Apple secured a slot on the highly coveted Paris Fashion Week calendar. Early this morning, Apple enticed elite editors out of bed for an early pre-Chanel breakfast at famed Paris concept store Colette to preview the Apple Watch. Karl Lagerfeld himself stopped by...before his own show. ELLE's own EIC Robbie Myers was also there (that's her dainty wrist pictured) and she reports that the watch feels "light, yet substantial. " The Watch is on display at Colette for one day only. Fashion in the Age of Instagram - NYTimes.com.

Photo In the Dries Van Noten exhibition at the Musée des Arts Décoratifs in Paris is a video that stitches together sequences from 20 years of his runway shows — a “supercut,” in online argot. 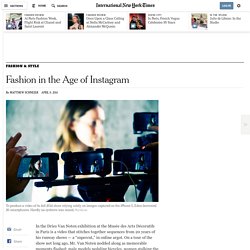 On a tour of the show not long ago, Mr. Van Noten nodded along as memorable moments flashed: male models pedaling bicycles, women stalking the length of an enormous dinner table. But what stood out most were the ghostly points of light illuminating the audience’s faces in the recent shows. It was, Mr. The professional photographers on the risers facing the runways now represent only a fraction of those furiously jockeying to document each outfit, accessory and bit of set dressing. Tutorial tecnológico. Agora você pode salvar seus posts favoritos. 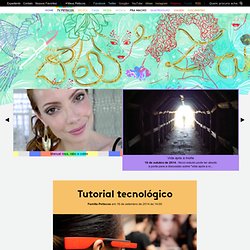 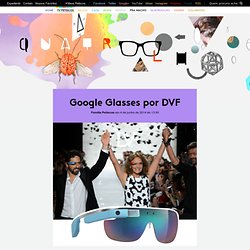 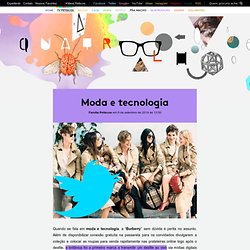 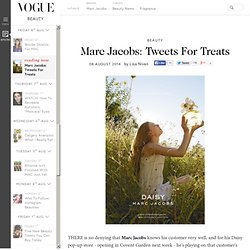 No money will exchange hands, instead tweets using the hashtag #MJDaisyChain will "buy" you samples of the designer's trio of Daisy fragrances - Daisy, Daisy Eau So Fresh and Daisy Dream - access to a Marc Jacobs nail bar, a photo booth (there's nothing that draws a queue like a photo booth) and a Vine booth. The concept was first trialled in New York earlier this year and Jacobs has certainly thought of everything, from free coffee to free wi-fi - after all, going over your data limit would really taint the experience. Then of course there's the ultimate incentive to get involved - a Marc by Marc Jacobs handbag awarded to the best tweeter each day.