Dumb-ass stuff we need to stop saying to Dads. Recently I got chatting with a nice lady in the queue at the supermarket. 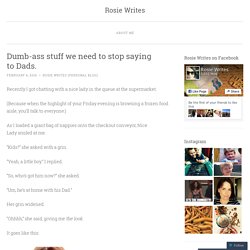 (Because when the highlight of your Friday evening is browsing a frozen food aisle, you’ll talk to everyone.) As I loaded a giant bag of nappies onto the checkout conveyor, Nice Lady smiled at me. “Kids?” She asked with a grin. “Yeah, a little boy.” “So, who’s got him now?” One little change in how you talk to your kids can help them be more successful. This father came up with a BRILLIANT way to make sure his son has a good day, every day.

18 realistic family photos. Because we know parenting isn't picture-perfect. Family photographer Danielle Guenther gets the struggle that is parenting. 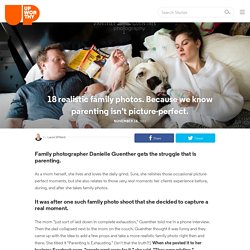 As a mom herself, she lives and loves the daily grind. Sure, she relishes those occasional picture-perfect moments, but she also relates to those very real moments her clients experience before, during, and after she takes family photos. It was after one such family photo shoot that she decided to capture a real moment.

The mom "just sort of laid down in complete exhaustion," Guenther told me in a phone interview. Then the dad collapsed next to the mom on the couch. "Parenting Is Exhausting. " It was the opposite of all those nearly flawless pics we flood Facebook and Instagram with. And that's how her photo series "Best Case Scenario" was born. In addition to or even in place of traditional family photos, Guenther takes staged but oh-so-real pictures for her clients. They're hilarious and relatable, and she shared "Parenting Is Exhausting" and 18 other gems with us. 1.

The science of spanking: What happens to spanked kids when they grow up? You know what the most annoying thing in the world is when you are a parent? 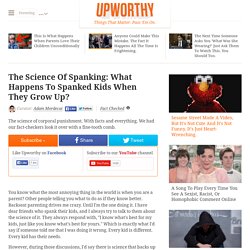 Other people telling you what to do as if they know better. Backseat parenting drives me crazy. Until I'm the one doing it. I have dear friends who spank their kids, and I always try to talk to them about the science of it. KiddyUp: The Crowdsourcing App That Makes Parenting Easier, And Cheaper. It takes a village to raise a child — an Internet village, that is, according to Zoe Bermant, co-creator of a new Israeli-made app called KiddyUp. 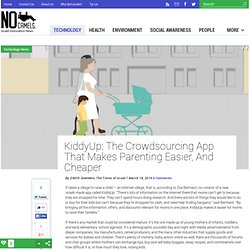 “There’s lots of information on the Internet there that moms can’t get to because they are strapped for time. They can’t spend hours doing research. And there are lots of things they would like to do or buy for their kids but can’t because they’re strapped for cash, and need help finding bargains,” said Bermant. “By bringing all the information, offers, and discounts relevant for moms in one place, KiddyUp makes it easier for moms to raise their families.” If there’s any market that could be considered mature, it’s the one made up of young mothers of infants, toddlers, and early elementary-school age kids. Related articles The thing is, said Bermant, there is no single marketplace that brings together all these elements. This article was first published on The Times of Israel and was re-posted with permission. Photo: KiddyUp. Penniless Parenting. 15 hilarious parenting comics that are almost too real.

Stuff Moms say: How To Prepare For Parenthood in 11 Easy Steps. Congratulations, you've decided to reproduce. 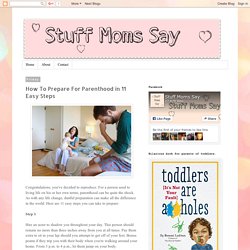 For a person used to living life on his or her own terms, parenthood can be quite the shock. As with any life change, dutiful preparation can make all the difference in the world. Here are 11 easy steps you can take to prepare: Step 1 Hire an actor to shadow you throughout your day. "Can I close the bathroom door? " Every 15 minutes, make this person a snack. Step 2 Call all of your friends without children. Step 3. Think you are ready to have children? Hilarious new parent test taking mummy blogs by storm MIGHT just put you off. By Bianca London for MailOnline Published: 15:05 GMT, 16 October 2012 | Updated: 11:25 GMT, 21 October 2014 Most broody mothers see having a child as a wonderful gift from God but one blogger has set about putting paid to that ideal. 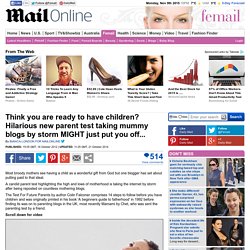 A candid parent test highlighting the high and lows of motherhood is taking the internet by storm after being reposted on countless mothering blogs. The Test For Future Parents by author Colin Falconer comprises 14 steps to follow before you have children and was originally printed in his book 'A beginners guide to fatherhood' in 1992 before finding its was on to parenting blogs in the UK, most recently Mamami by Chet, who was sent the parenting test by a friend. Scroll down for video Think you're ready for motherhood? Chet said: 'Most people will tell you that "it" is the hardest, most rewarding, rollercoaster job you will ever have - there's no pay, you are on duty 24/7 and, at times, it seems like there are few rewards.