Baltimore Car Accident Lawyers. September 3, 2019 Every day, hundreds of thousands of commuters use the Capital Beltway, a 64-mile interstate highway that surrounds Washington D.C. and passes through Maryland and Virginia, to get to and from work. 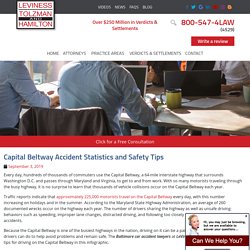 New Program Aimed at Preventing Drunk Driving. September 5, 2019 The state of Maryland has partnered with the Driver Alcohol Detection System for Safety (DADSS) Program to launch Driven to Protect, a pilot program that will help keep drunk drivers off the road. 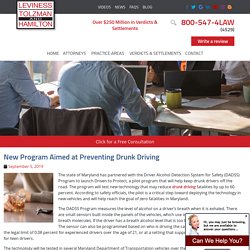 The program will test new technology that may reduce drunk driving fatalities by up to 60 percent. Rise in Fatal Motorcycle Accidents. September 3, 2019 In less than a month, six people have lost their lives in motorcycle accidents in the state of Maryland. 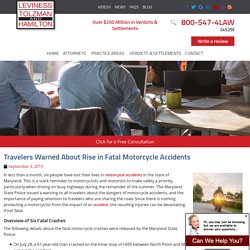 This is a stark reminder to motorcyclists and motorists to make safety a priority, particularly when driving on busy highways during the remainder of the summer. The Maryland State Police issued a warning to all travelers about the dangers of motorcycle accidents, and the importance of paying attention to travelers who are sharing the road.

Since there is nothing protecting a motorcyclist from the impact of an accident, the resulting injuries can be devastating, if not fatal. Overview of Six Fatal Crashes. Car Accident Lawyers in Baltimore. August 30, 2019 Consumer Watchdog, a non-profit consumer advocacy organization, recently released a report outlining the threat of automotive cyber-attacks on motor vehicles utilizing the internet. 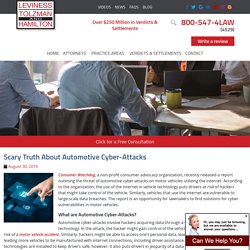 According to the organization, the use of the internet in vehicle technology puts drivers at risk of hackers that might take control of the vehicle. Similarly, vehicles that use the internet are vulnerable to large-scale data breaches. The report is an opportunity for lawmakers to find solutions for cyber vulnerabilities in motor vehicles. What are Automotive Cyber-Attacks? Automotive cyber-attacks involve hackers acquiring data through a vehicle’s driver assistance technology. The Report According to the report released by Consumer Watchdog, driver assistance technologies connected to the internet put vehicles at risk of vulnerabilities that allow hackers to control the vehicle remotely. The amount of vehicles utilizing internet technology is growing rapidly. Cybersecurity Tips for Drivers. Baltimore Car Accident Lawyers. August 28, 2019 As 2020 looms on the horizon, Congress is rallying support in drafting revised legislature that will rev up renewed interest in getting autonomous vehicles (AV) on the road in the United States. 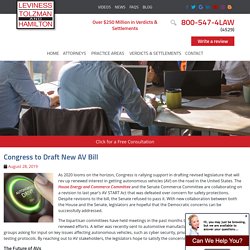 The House Energy and Commerce Committee and the Senate Commerce Committee are collaborating on a revision to last year’s AV START Act that was defeated over concern for safety protections. Despite revisions to the bill, the Senate refused to pass it. With new collaboration between both the House and the Senate, legislators are hopeful that the Democratic concerns can be successfully addressed. Make Safety Part of Your Labor Day. August 26, 2019 As summer begins to wind down, people across the country are looking forward to the last holiday weekend of the season. 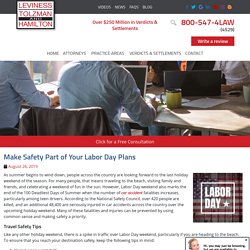 For many people, that means traveling to the beach, visiting family and friends, and celebrating a weekend of fun in the sun. However, Labor Day weekend also marks the end of the 100 Deadliest Days of Summer when the number of car accident fatalities increases, particularly among teen drivers. According to the National Safety Council, over 420 people are killed, and an additional 48,400 are seriously injured in car accidents across the country over the upcoming holiday weekend. Many of these fatalities and injuries can be prevented by using common sense and making safety a priority. Travel Safety Tips. Dundalk Personal Injury Lawyers. If you have never been involved in a car accident, it is likely that you have witnessed one happen, or driven past an accident that has already occurred. 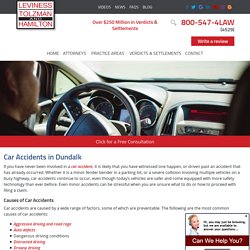 Whether it is a minor fender bender in a parking lot, or a severe collision involving multiple vehicles on a busy highway, car accidents continue to occur, even though today’s vehicles are safer and come equipped with more safety technology than ever before. Even minor accidents can be stressful when you are unsure what to do or how to proceed with filing a claim.

Causes of Car Accidents. New Car Technology Distracting for Older Drivers. August 21, 2019 At the risk of sounding ageist, research has begun to show that older Americans may have more difficulty operating their smart cars than their younger counterparts. 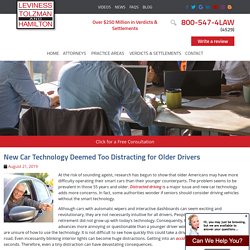 The problem seems to be prevalent in those 55 years and older. Distracted driving is a major issue and new car technology adds more concerns. In fact, some authorities wonder if seniors should consider driving vehicles without the smart technology. Although cars with automatic wipers and interactive dashboards can seem exciting and revolutionary, they are not necessarily intuitive for all drivers. Changes in Car Window Glass Creates Issues. August 19, 2019 Vehicles today are equipped with windows that resist breaking during collisions. 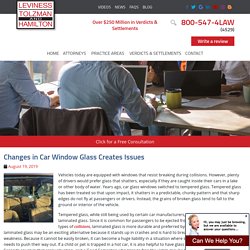 However, plenty of drivers would prefer glass that shatters, especially if they are caught inside their cars in a lake or other body of water. Years ago, car glass windows switched to tempered glass. Tempered glass has been treated so that upon impact, it shatters in a predictable, chunky pattern and that sharp edges do not fly at passengers or drivers. What Makes the Capital Beltway Dangerous? August 16, 2019 Thousands of motorists travel the Capital Beltway every day, whether they are commuting to work, or traveling up or down the east coast via Interstates 95 and 495. 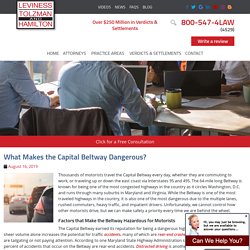 The 64-mile long Beltway is known for being one of the most congested highways in the country as it circles Washington, D.C. and runs through many suburbs in Maryland and Virginia. New Legislation Focuses on Improving Car Safety. August 14, 2019 Between 2017 and 2018, there were over 40,000 fatalities in the United States that were caused by motor vehicle accidents. As a result, there have been several bills proposed that focus on ways to improve car safety, from automatic shutoff technology to efforts that address impaired driving. The House Subcommittee on Consumer Protection and Commerce held a hearing last month that focused on these proposed bills. During the hearing, Subcommittee members questioned witnesses about certain aspects of the bills and how they would improve car safety. The four proposed bills included the following: Drones May Change the Way Medical Supplies are Delivered.

August 12, 2019 If you ever passed a major car or truck accident on a busy highway, you know how devastating they can be. When there are serious, life-threatening injuries involved, it is crucial that emergency medical responders arrive at the scene as quickly as possible to deliver life-saving medical supplies. Parents Play a Significant Role in Keeping Teen Drivers Safe. August 7, 2019 Car accidents are the leading cause of death among teenagers between the ages of 15 and 18. In the United States, approximately 3,000 teenagers lose their lives in tragic car accidents every year. New Study Shows Drugged Drivers Do Not Think They Will Get Caught. August 5, 2019 As more states move closer to legalizing medical and recreational marijuana, new research shows people in the United States are greatly misinformed about the dangers of drugged driving. In 2018, cannabis-related motor vehicle accidents across Maryland had nearly doubled from the previous year, accounting for more than one-third of all drugged driving car accidents in a single year.

Yet, according to a AAA Foundation for Traffic Safety research project, 70 percent of all Americans do not believe they will get caught driving high. In fact, nearly 15 million reported driving within an hour of getting high. It is important to know more about how marijuana and other drugs impact driving and what we can do to prevent impaired driving. Impair judgementImpact coordinationSlow reaction time Challenges with Detecting Marijuana Use Unlike sobriety testing for alcohol, detecting marijuana and other drug use is not as simple. Dozen Children Injured in Potomac School Bus Accident. July 30, 2019 A dozen children sustained injuries in a school bus accident that occurred in Potomac, Maryland.

On Tuesday morning, a school bus carrying 40 passengers collided with a work truck on River Road. The driver and 12 children went to local hospitals for medical treatment of minor injuries. School buses transport students on a daily basis during the school year and may be used in the summer to drive campers to camp and other destinations. Safety Tips for Motorcycling with a Group. Waze May Cut Emergency Response Times. July 29, 2019 The Waze traffic application is widely used by customers to get directions and avoid traffic issues, such as road closures or heavy traffic caused by accidents. Life-Saving Improvements to Car Safety Benefit Men More Than Women. July 26, 2019 Recent research conducted by the University of Virginia found both good and bad news about the risk of fatal injuries in car accidents involving men and women.

While cars are undeniably safer than they were a decade ago, the changes made to improve crash safety do not benefit women as significantly as they do men. The study found females are 73 percent more likely than men to sustain fatal injuries in a motor vehicle accident. Use Caution When Approaching a Flooded Road. July 24, 2019. Overdose and Car Accidents Top List of Preventable Deaths. July 22, 2019. Seeking Compensation for Injuries Involving Paralysis.