Parkinson's Ireland. 2016 CNS PD. Parkinson's Disease Medications: Types of Common Drug ... There have been rapid and remarkable changes over the recent past in treating Parkinson's disease. 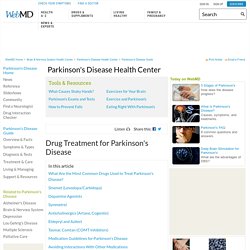 The development of new drugs and an understanding of how best to use them and the older drugs have significantly improved the quality of life of people with the disease. There are two general approaches to the treatment of Parkinson's disease with medication. The first approach attempts to increase the levels of dopamine in the brain and the second approach attempts to improve the symptoms of Parkinson's disease by other means. Recommended Related to Parkinson's Parkinson’s Disease: Driving a Car Parkinson’s disease is a type of movement disorder that can significantly impair driving skills, cause safety concerns, and force many people with the condition to stop driving a car. 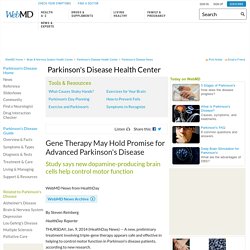 The therapy, called ProSavin, works by reprogramming brain cells to produce dopamine, the chemical essential for controlling movement, the researchers said. "We demonstrated that we are able to safely administer genes into the brain of patients and make dopamine, the missing agent in Parkinson's patients," said researcher Kyriacos Mitrophanous, head of research at Oxford BioMedica in England, the company that developed the therapy and funded the study. ProSavin also helps to smooth out the peaks and valleys often produced by the drug levodopa, the current standard treatment, Mitrophanous said. Bressie Talks About Depression - Lovin Dublin Live. Research could inform new therapy for Parkinson’s disease ...

While scientists are unsure of the molecular causes of Parkinson's Disease, they do know the disorder's tremors and other motor dysfunctions are linked to a loss of dopaminergic neurons located in the substantia nigra, a structure in the midbrain. 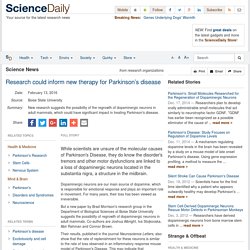 Dopaminergic neurons are our main source of dopamine, which is responsible for emotional response and plays an important role in movement. For many years, their loss has been viewed as irreversible. But a new paper by Brad Morrison's research group in the Department of Biological Sciences at Boise State University suggests the possibility of regrowth of dopaminergic neurons in adult mammals.

Co-authors are Joshua Albright, Iva Stojkovska, Abir Rahman and Connor Brown. Major depression - National Library of Medicine - PubMed Health. 2016 CNS Depression Vortrag BB. A New Approach to Parkinson’s Disease: How Robotics Can Help. There are many insidious diseases that debilitate people, but one of the worst is Parkinson’s. 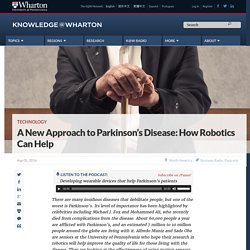 Its level of importance has been highlighted by celebrities including Michael J. Fox and Mohammed Ali, who recently died from complications from the disease. About 60,000 people a year are afflicted with Parkinson’s, and an estimated 7 million to 10 million people around the globe are living with it. Alfredo Muniz and Sade Oba are seniors at the University of Pennsylvania who hope their research in robotics will help improve the quality of life for those living with the disease.

They are looking at the effectiveness of using motion sensors to gather data and have founded a company called Xeed. An edited transcript of the conversation follows. Knowledge@Wharton: Where did the idea come from to gather data on Parkinson’s disease? Alfredo Muniz: It actually came from a robot. So we took some sensors in the robot and used them for a different purpose. Sade Oba: It was fairly quick. Oba: Yes. Epilepsy Ireland. CNS Epilepsy BB. 2016 Endocrine 1 Lecture BB. Diabetes 2 lecture NP BB. DiabeticMonitoringChart. SSI 2007 Editorial. 2016 Pharmacovigilance ADRs. Role of IMB. Drug Reimbursement in Ireland Attachment1. NICE Depression Full Guidance 2011. 2015 CNS Anxiety NP BB. 2015 CNS 1 depression NP BB. CNS 1 background. Cannabis use in adolescence. Brain disorders in europe.