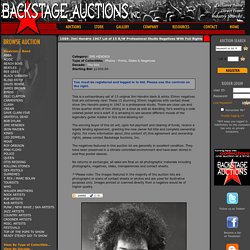 These 15 stunning 35mm negatives with contact sheet show Jimi Hendrix posing in 1967 in a professional studio. There are close ups and three quarter shots of him sitting on a stool as well as standing; he's wearing a wide collared jacket and a scarf. It is amazing to see several different moods of the legendary guitar master in this mind-blowing lot! The winning buyer of this lot will, upon full payment and clearing of funds, receive a legally binding agreement, granting the new owner full title and complete ownership rights.

For more information about (the content of) this agreement and ownership rights, please contact Backstage Auctions, Inc. The negatives featured in this auction lot are generally in excellent condition. Frank Zappa - Lost Interview - Hendrix, UFOs & Sex (5-7) Jimi Hendrix: Art by Jean Giraud, aka Moebius. The best thing that can happen in art is when a huge artist pays a homage to another huge artist – then two different worlds collide, creating a crossover that puts a smile on the faces of both, the rock music and comic book fans. 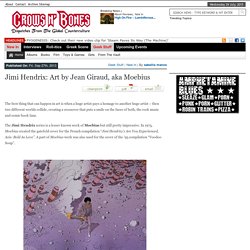 The Jimi Hendrix series is a lesser known work of Moebius but still pretty impressive. In 1975, Moebius created the gatefold cover for the French compilation “Jimi Hendrix/1 Are You Experienced, Axis: Bold As Love”. A part of Moebius work was also used for the cover of the ’95 compilation “Voodoo Soup”. Rating: +4 (from 4 votes) 'Scuse Me While I Kiss the Sky: Jimi Hendrix: Voodoo Child - David Henderson. Jimi Hendrix: Art by Jean Giraud, aka Moebius. Surreal, Psychedelic Jimi Hendrix Art by Moebius - Music - Forums. BBKing_on_Jimi. By Caesar Glebbeek UniVibes: How do you rate Jimi as a blues guitarist, let's say along the likes of Albert King, etc.? 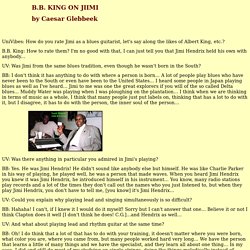 B.B. King: How to rate them? I'm no good with that, I can just tell you that Jimi Hendrix held his own with anybody... UV: Was Jimi from the same blues tradition, even though he wasn't born in the South? BB: I don't think it has anything to do with where a person is born... UV: Was there anything in particular you admired in Jimi's playing? BB: Yes. UV: Could you explain why playing lead and singing simultaneously is so difficult? 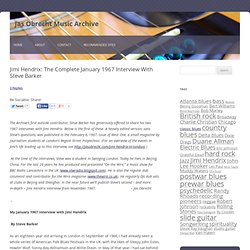 Below is the first of these. A heavily edited version, sans Steve’s questions, was published in the February 6, 1967, issue of West One, a small magazine by journalism students at London’s Regent Street Polytechnic. (For an overview of the events in Jimi’s life leading up to this interview, see At the time of the interviews, Steve was a student in Swinging London. Today he lives in Beijing, China. My January 1967 Interview with Jimi Hendrix By Steve Barker As an eighteen year old arriving in London in September of 1966, I had already seen a whole series of American Folk Blues Festivals in the UK, with the likes of Sleepy John Estes, Howlin’ Wolf, Sonny Boy Williamson and Willie Dixon. Steve Barker working at the BBC, 1970s.

I turned up to see Jimi at his flat on Montague Square, cassette recorder and one cassette in hand. Hingham – drifted in and out. . Interview Jimi Hendrix. In the avant -garde of popmusio, one oí the most frultful thrusts is belng led by a 22 year old blaCk hlghschool drop-out named Jimt (spelling was never hls long snit) Hendrtx. 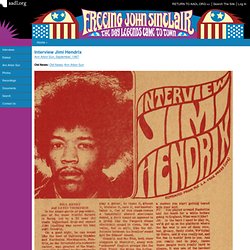 On a good nlght, he can sound Uke the best of Ughtning Hopkins and Karlheinz Stockhausen. Hen drlx,on the thresholdofameteoric career, was greeted at the Monterey Pop Festival by the normaUy coolly laconlc Stone, Drian Jones, wbo rlpped hls glasses t'i trying to scramble over the press plcket fence to get closer to him. In England, Hendrix's home for the last 9raonths, the Beatles, M.B. E. s . and all, sit at hls feet in the front row of clubs and watch hlm whip an endless procession of mlracles out of hl guitar. He is normally Joined by Mitch Mitchell on drums and Noel Redding (who Hendrlx thinks looks suspiciously Uke Bob Dylan's grandmother) on bass, and together these three musicians produce a sound so wide and thick that it may well serve as more than just a figurative base for the Pop music of the future.