New David Bowie: Blackstar ★ Will there ever be another artist as continually innovative as David Bowie? 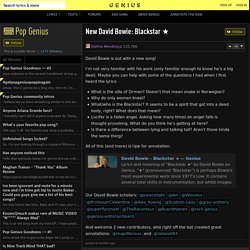 In his late 60s, and continues to find new ways to refine his sound and keep his fans guessing. Amazing song and an incredible video. Anyone else get a heavy Scott Walker influence? Some of the vocals felt like they could have been taken directly from “The Drift”. Onto the thread topic, I only watched the video once, it will take repeated listens and views to even get an idea on what the fuck Bowie is trying to portray.

David Bowie - The Jean Genie & Round & Round [w/ Jeff Beck 3 July 1973] NEW AUDIO. David Bowie and Jeff Beck together as NOT seen in the ‘Ziggy Stardust’ movie. “I know what kind of welcome you’re gonna give to JEFF BECK!” 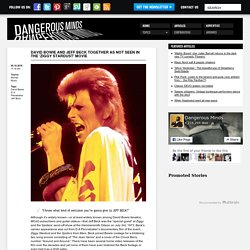 Although it’s widely known—or at least widely known among David Bowie fanatics, MOJO subscribers and guitar otakus—that Jeff Beck was the “special guest” at Ziggy and the Spiders’ send-off show at the Hammersmith Odeon on July 3rd, 1973, Beck’s cameo appearance was cut from D.A Pennebaker’s documentary film of the event, Ziggy Stardust and the Spiders from Mars. David Bowie's secret reunion with beauty Hermione Farthingale who broke his heart. Amid the endless flow of words that streamed from David Bowie’s fathomless imagination, one hauntingly simple couplet always aroused speculation. 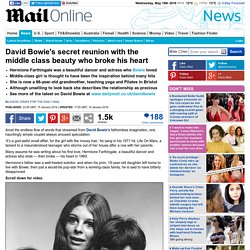 ‘It’s a god-awful small affair, for the girl with the mousy hair,’ he sang in his 1971 hit, Life On Mars, a lament to a misunderstood teenager who storms out of her house after a row with her parents. Many assume he was writing about his first love, Hermione Farthingale, a beautiful dancer and actress who stole — then broke — his heart in 1969. Hermione’s father was a well-heeled solicitor, and when his prim, 19-year-old daughter left home to live with Bowie, then just a would-be pop-star from a working-class family, he is said to have bitterly disapproved.

Scroll down for video. Celebrity bond. Background[edit] While a celebrity bond can cover any work of art whose future royalties are based in part on a widespread reputation of the creator of the work, celebrity bonds often are music-based celebrity bonds. 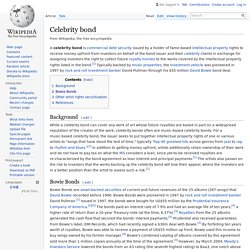 For a music-based celebrity bond, the issuer seeks to put together intellectual property rights of one or various artists to "songs that have stood the test of time," typically "top-40 greatest hits across genres from jazz to rap to rhythm and blues. "[1] In addition to getting money upfront, artists additionally retain ownership of their work and do not have to pay tax on what the IRS considers a loan, since yet-to-be received royalties are re-characterized by the bond agreement as loan interest and principal payments.[1] The artists also passes on the risk to investors that the works backing up the celebrity bond will lose their appeal, where the investors are in a better position than the artist to assess such a risk.[1] Bowie Bonds[edit] References[edit]

Glogin?URI= The Stone is a forum for contemporary philosophers and other thinkers on issues both timely and timeless. 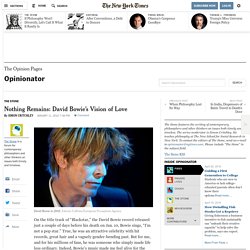 Photo On the title track of “Blackstar,” the David Bowie record released just a couple of days before his death on Jan. 10, Bowie sings, “I’m not a pop star.” True, he was an attractive celebrity with hit records, great hair and a vaguely gender-bending past. But for me, and for his millions of fans, he was someone who simply made life less ordinary. Indeed, Bowie’s music made me feel alive for the first time. He spoke to the weirdos, the freaks, the outsiders and drew us in to an extraordinary intimacy. How David Bowie Helped Nina Simone Out of a Slump. Alan Light is the author of the forthcoming What Happened, Miss Simone? 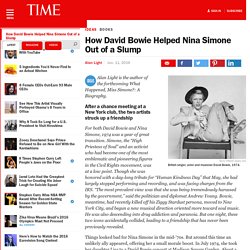 : A Biography. For both David Bowie and Nina Simone, 1974 was a year of great transition. Simone, the “High Priestess of Soul” and an activist who had become one of the most emblematic and pioneering figures in the Civil Rights movement, was at a low point. Though she was honored with a day-long tribute for “Human Kindness Day” that May, she had largely stopped performing and recording, and was facing charges from the IRS. David Bowie – Playboy Magazine. CollectorsFrenzy - DAVID BOWIE~TMWSTW~ 1971 ORIGINAL RAREST USA BOWIE LP IN EXISTENCE NO RESERVE !! Click to enlarge This is the RAREST DAVID BOWIE ORIGINAL LP PRESSING IN THE WORLD and I can prove it ! 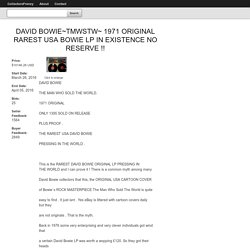 There is a common myth among many David Bowie collectors that this, the ORIGINAL USA CARTOON COVER of Bowie`s ROCK MASTERPIECE The Man Who Sold The World is quite easy to find . Are not originals . Back in 1976 some very enterprising and very clever individuals got wind that. K-OODI Magazine March 2016, Issue 4. Behind the music on “Vinyl”: This is why David Bowie cover bands are so rare - Salon.com. “Cyclone,” the sixth episode of “Vinyl,” the HBO drama from Martin Scorsese about the music business in the 1970s, opens with main character Richie Finestra (Bobby Cannavale) on a major, multi-day cocaine bender (no, seriously, even bigger than previously). 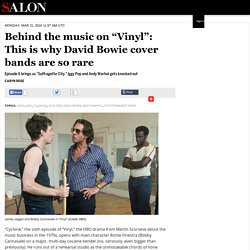 He runs out of a rehearsal studio as the unmistakable chords of none other than “Suffragette City” by David Bowie roar out of a Les Paul, the edge of which swings into the corner of your screen, and you realize what has to be next. At that moment, your reaction will likely be one of the following: 1) Oh god no 2) It’s too soon 3) This is terrible.