Environmental_survey_grid. In a World of What If Chapter 7, a veronica mars fanfic. Eli was working on a old Buick when his uncle hollered his name. 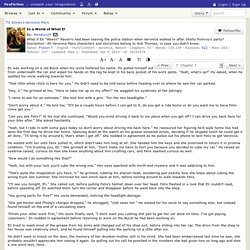 He pulled himself out from underneath the car and wiped his hands on the rag he kept in his back pocket of his work pants. "Yeah, what's up? " He asked, when he spotted his uncle walking towards him. "That little white chick is here for you. " He didn't need to be told twice before heading over to where he saw her car parked. "Hey, V. " "I came to ask for an estimate. " Agent Mars Chapter 1: Agent lose, a veronica mars fanfic. ... 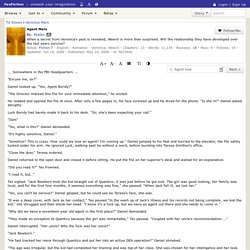 Somewhere in the FBI Headquarters ... "Excuse me, sir? " Daniel looked up. "Yes, Agent Boridy? " "The Director marked this file for your immediate attention," he smiled. He nodded and opened the file at once. Luck Boridy had barely made it back to his desk. Indelible Chapter 1, a veronica mars fanfic. For wsm21. 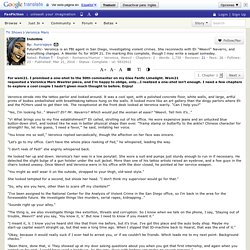 I promised a one-shot to the 50th commenter on my Glee Fanfic Limelight. Wsm21 requested a Veronica Mars WeeVer piece, and I'm happy to oblige, only...I realized a one-shot isn't enough. I need a few chapters to explore a cool couple I hadn't given much thought to before. Enjoy! Veronica strode into the tattoo parlor and looked around. "Yes, I'm looking for…" Weevil? "V! "You know me so well," Veronica replied sarcastically, though the affection on her face was sincere. "Let's go to my office. And afterwards, a veronica mars fanfic. And afterwards This is what Logan knows: When he thinks it can't possibly get any worse than it already is, it does. 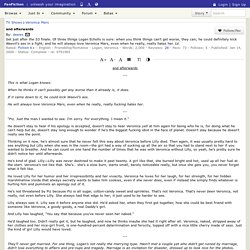 Flag Pole Sitta Chapter 2, a veronica mars fanfic. Part 2 We drove the LaBaron to the tattoo shop after first stopping off at Weevil's house to get him some real clothes, not that my dad's clothes didn't fit him, but we both agreed that he looked silly in them. 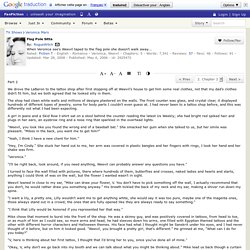 The shop had clean white walls and millions of designs plastered on the walls. The front counter was glass, and crystal clear, it displayed hundreds of different types of jewelry, some for body parts I couldn't even guess at. I had never been to a tattoo shop before, and this was differently not what I had been expecting. A girl in jeans and a Skid Row t-shirt sat on a stool behind the counter reading the latest Us Weekly; she had bright red spiked hair and plugs in her ears, an eyebrow ring and a nose ring that sparkled in the overhead lights. "Weevil, you look like you found the wrong end of a baseball bat. " In a World of What If Chapter 1, a veronica mars fanfic. He was about to leave the police station when he saw her walk in. 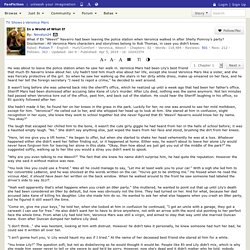 Veronica Mars had been Lily's best friend that much Eli Navarro knew about her. Lily hadn't told him much else about her life, except she loved Veronica Mars like a sister, and she was fiercely protective of the girl. So when he saw her walking up the stairs in her dirty white dress, make up smeared on her face, and he heard her tell the foreign secretary "I need to repot a crime," he decided to wait around. It wasn't long before she was ushered back into the sheriff's office, which he realized up until a week ago that had been her father's office. Sheriff Mars had been dismissed after accusing Jake Kane of Lily's murder. She hadn't made it far, he found her on her knees in the grass in the park. The laugh that escaped her chilled him to the bone, it wasn't the cute girly giggle he had heard from her in the halls of school before; it was a haunted empty laugh.

Ink, a veronica mars fanfic. Ink She walked into his shop five years after she had last seen him. 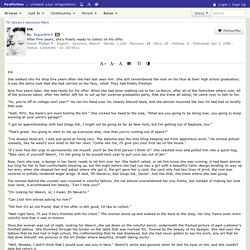 She still remembered the look on his face at their high school graduation; it was the same look that she had carried on her face, relief. They had finally finished. Now five years later, she was ready for his offer. Mars Invests Chapter 1, a veronica mars fanfic. AN: So many people reviewed my story, Ink, both here and at the other site I post, asking, or demanding, that I write the next part of the story. 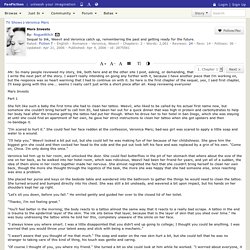 I wasn't really intending on going any further with it, because I have another piece that I'm working on, but the responce was so heart warming that I had to continue on with it. So here is the first chapter of the sequal, yes, I said first chapter, I'll keep going with this one... seems I really can't just write a short piece after all. Keep reviewing everyone! Mars Invests Part 1 She felt like such a baby the first time she had to clean her tattoo.