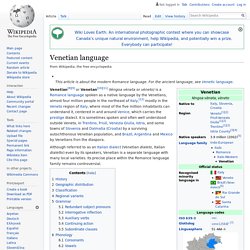 Map showing the spreading of Romance languages; Venetian is number 15 Venetian or Venetan (Venetian: vèneto, vènet or łéngua vèneta) is a Romance language spoken as a native language by almost four million people,[7] mostly in the Veneto region of Italy, where most of the five million inhabitants can understand it. It is sometimes spoken and often well understood outside Veneto, in Trentino, Friuli, Venezia Giulia, Istria, and some towns of Dalmatia. Venetian is usually referred to as an Italian dialect although it is a Western Romance language, a different branch of Romance from that of Italian.

Some authors include it among the Gallo-Italic languages,[8] but by most authors, it is treated as separate.[9] Typologically, Venetian has little in common with the Gallo-Italic languages of northwestern Italy, but shows some affinity to nearby Istriot. History[edit] Virtually all modern Venetian speakers are diglossic with Italian. Chair - chairs, century, legs, arms, seat, carved and indeed. CHAIR, a movable seat, usually with four legs and for a single person, the most varied and familiar article of domestic furniture. 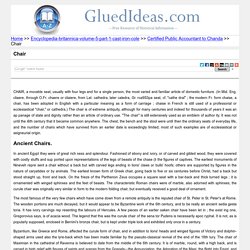 (In Mid. Eng. cliaere, through O.Fr. chaere or cliaiere, from Lat. cathedra, later caledra, Gr. rca9S3pa seat, cf. "cathe dral" ; the modern Fr. form chaise, a chair, has been adopted in English with a particular meaning as a form of carriage ; chaise in French is still used of a professorial or ecclesiastical "chair," or cathedra.) Grand Canal (Venice) Two gondoliers pull out with clients on board from a row of gondolas on the Grand Canal near the Rialto Bridge. 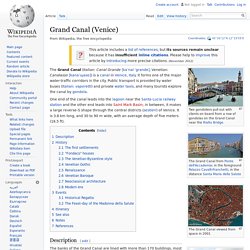 The Grand Canal viewed from space in 2001 The Grand Canal (Italian: Canal Grande [kaˈnal ˈɡrande], Venetian: Canałasso [kanaˈɰaso]) is a canal in Venice, Italy. It forms one of the major water-traffic corridors in the city. Public transport is provided by water buses (Italian: vaporetti) and private water taxis, and many tourists explore the canal by gondola. Marco I Sanudo. Marco Sanudo (c. 1153 – between 1220 and 1230, most probably 1227) was the creator and first Duke of the Duchy of the Archipelago, after the Fourth Crusade. 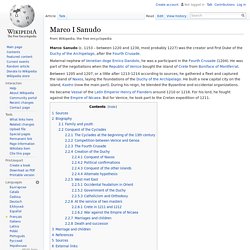 Maternal nephew of Venetian doge Enrico Dandolo, he was a participant in the Fourth Crusade (1204). He was part of the negotiations when the Republic of Venice bought the island of Crete from Boniface of Montferrat. He became Vassal of the Latin Emperor Henry of Flanders around 1210 or 1216. For his lord, he fought against the Empire of Nicaea. Geoffrey of Villehardouin. Geoffrey of Villehardouin (in French: Geoffroi de Villehardouin) (1160–c. 1212) was a knight and historian who participated in and chronicled the Fourth Crusade. 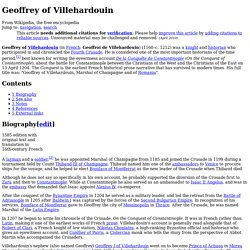 Illustration by Robert Neubecker In the fall of 1457, villagers in Savigny, France witnessed a sow and six piglets attack and kill a 5-year-old boy. 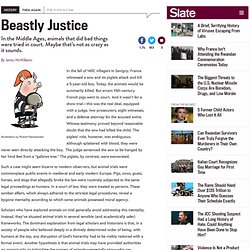 Today, the animals would be summarily killed. But errant 15th-century French pigs went to court. And it wasn’t for a show trial—this was the real deal, equipped with a judge, two prosecutors, eight witnesses, and a defense attorney for the accused swine. Witness testimony proved beyond reasonable doubt that the sow had killed the child. Such a case might seem bizarre to modern observers, but animal trials were commonplace public events in medieval and early modern Europe. Scholars who have explored animals on trial generally avoid addressing this mentality. While these explanations go partway toward elucidating animal trials, none of them fully clarify the practice. Judges routinely considered animals’ personal circumstances before making a legal decision. Intentions mattered as well. Perotin: Alleluia Nativitas gloriose virginis. Things to Note Perotin uses the chant Alleluia Nativitas, (score),(mp3) as a basis for the two organal voices. 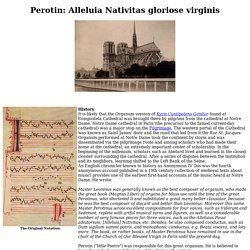 The need to coordinate more than two lines of music posed a particular problem for the composers and consequently a system of rhythmic notation was devised. Perotin uses different types of organum in this work, fluid music in the two upper voices over a long held note (a drone of sorts); similar music with more change in the chant line (discant: see ex semine at 6:00) as well as plainchant itself. The more syllabic sections of the chant are set with the longer held notes and the sections of the chant that are more florid are set with discant. Listening Chart Perotin: Alleluia Nativitas gloriose virginis (circa. 1200) Analyse de document - Le carnet de Villard de Honnecourt - La ville au 13e siècle. Online Etymology Dictionary. "rope that controls a sail," late 13c., shortened from Old English sceatline "sheet-line," from sceata "lower part of sail," originally "piece of cloth," from same root as sheet (n.1). 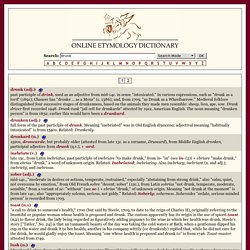 Compare Old Norse skaut, Dutch schoot, German Schote "rope fastened to a sail. " This probably is the notion in phrase three sheets to the wind "drunk and disorganized," first recorded 1812 (in form three sheets in the wind), an image of a sloop-rigged sailboat whose three sheets have slipped through the blocks are lost to the wind, thus "out of control. " Apparently there was an early 19c. informal drunkenness scale in use among sailors and involving one, two, and three sheets, three signifying the highest degree of inebriation; there is a two sheets in the wind from 1813.

History of Dance: An Interactive Arts Approach - Gayle Kassing - Google Books. Notes on Medieval Life. Undefined copyright 1996 by Lady Melisande of Hali In our egalitarian democratic society, it is sometimes difficult to realize, let alone remember, how much time and effort used to be spent creating and maintaining class distinctions. 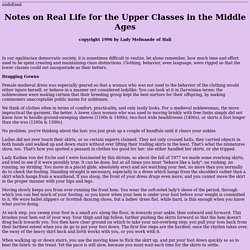 Clothing, behavior, even language, were rigged so that the lower classes could not masquerade as their betters. Dragging Gowns Female medieval dress was especially geared so that a woman who was not used to the behavior of the clothing would either injure herself, or behave in a manner not considered ladylike. Notes on Medieval Life. 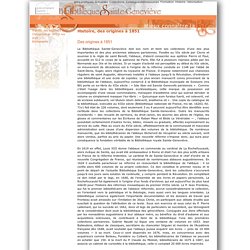 Wormwood belongs to the genus Artemisia, named for the goddess Artemis. Amalrician. The Amalricians were a pantheist, free love[1] movement named after Amalric of Bena. The beliefs are thought to have influenced the Brethren of the Free Spirit. The beginnings of medieval pantheistic Christian theology lie in the early 13th century, with theologians at Paris, such as David of Dinant, Amalric of Bena, and Ortlieb of Strassburg, and was later mixed with the millenarist theories of Gioacchino da Fiore.

Fourteen followers of Amalric began to preach that "all things are One, because whatever is, is God. " The Canterbury Tales: Character Profiles. Average Overall Rating: 4.5 Total Votes: 1424 The Host or "Harry Bailly": The proprietor of the Tabard Inn where the pilgrims to Canterbury stay before beginning their journey. He accompanies the pilgrims on their journey. It is the Host who devised the scheme of the tales, proposing that each tell two tales on the way to Canterbury, and he frequently mediates arguments between pilgrims and suggests who shall tell the next story.

Biography[edit] Amalric was born in the latter part of the 12th century at Bennes, a village between Ollé and Chauffours in the diocese of Chartres. Amalric taught philosophy and theology at the University of Paris and enjoyed a great reputation as a subtle dialectician; his lectures developing the philosophy of Aristotle attracted a large circle of hearers. In 1204 his doctrines were condemned by the university, and, on a personal appeal to Pope Innocent III, the sentence was ratified, Amalric being ordered to return to Paris and recant his errors. His death was caused, it is said, by grief at the humiliation to which he had been subjected. Propositions[edit] Three propositions only can with certainty be attributed to him: Peter Waldo. Peter Waldo, Valdo, Valdes, or Waldes (c. 1140 – c. 1205), also Pierre Vaudès or de Vaux, is credited as the founder of the Waldensians, a Christian spiritual movement of the Middle Ages, descendants of which still exist in various regions of southern Europe.

Life and work[edit] Specific details of his life are largely unknown. Extant sources relate that he was a wealthy clothier and merchant from Lyons and a man of some learning. Enrico Dandolo. Blindness[edit] It is not known for certain when and how Dandolo became blind. The story passed around after the Fourth Crusade was that he had been blinded by the Byzantines during the 1171 expedition to Byzantium (see Vital II Michele). Supposedly, Emperor Manuel Comnenus "ordered his eyes to be blinded with glass; and his eyes were uninjured, but he saw nothing".[1] However, this explanation is certainly false, as Dandolo continued to conduct business and sign documents well after 1171. In Venice it was illegal for a blind person to sign a document, since he/she could not read. Dandolo's blindness appears to have been total. History of Britain and Ireland - Google Books. Grand Strategy: The View from Oregon.