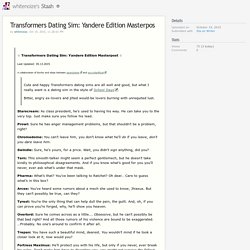 Cute and happy Transformers dating sims are all well and good, but what I really want is a dating sim in the style of School Days. Bitter, angry ex-lovers and jilted would-be lovers burning with unrequited lust. Starscream: As class president, he’s used to having his way. He can take you to the very top. Wolf In Sheep's Clothing (TFP Yandere AU) Part 5 - The Coy Pond. Slim arms wrapped themselves around Breakdown's neck as Knock Out leaned in. 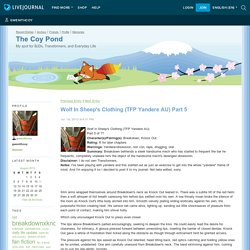 There was a subtle tilt of the red helm then a soft whisper of hot breath caressing him before lips settled over his own. A low throaty moan broke the silence of the room as Knock Out's lithe body arched into him. Smooth velvety plating sliding erotically against his own, the purposeful friction creating heat. His sensor net came alive, lighting up, sending out little shockwaves of pleasure from each point of contact, making him shiver hotly. Which only encouraged Knock Out to press even closer. The lips above Breakdown's parted encouragingly, seeking to deepen the kiss. The pressure against his lips eased as Knock Out relented, head tilting back, red optics catching and holding yellow ones as he smiled, undeterred. Transformers Dating Sim: Yandere Edition Masterpos - whitenoize's Sta.sh. TF Drabble Dump Chapter 5: MTMTE – Bob, a transformers/beast wars fanfic. Pairing: N/A, just Bob. 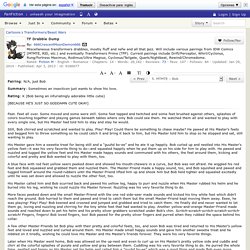 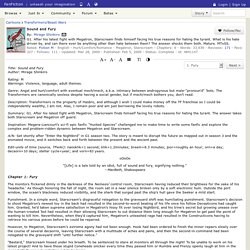 Genre: Angst and hurt/comfort with eventual mech/mech, a.k.a. intimacy between androgynous but male-"pronoun'd" 'bots. The Transformers are canonically sexless despite having a social gender, but if mech/mech bothers you, don't read. Description: Transformers is the property of Hasbro, and although I wish I could make money off the TF franchise so I could be independently wealthy, I am not. Alas, I remain poor and am just borrowing the lovely robots. Summary: G1. Inspiration: Megara-Liancourt's sci-fi epic fanfic "Hunted Species" challenged me to make time to write some fanfic and explore the complex and problem-ridden dynamic between Megatron and Starscream.

A/N: Set shortly after "Enter the Nightbird" in G1 season two. oOoOo "[Life] is a tale told by an idiot, full of sound and fury, signifying nothing. " Disappointed daddy kink. The Late Game — Fortress Maximus/Overlord Drabble. Dub-con.... The Late Game — Title: Head is not home Warnings: Interfacing,... These Games We Play Chapter 1, a transformers/beast wars fanfic. Written in response to this prompt: G1: Decepticons win. 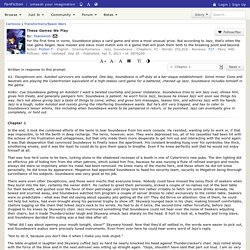 Autobot survivors are scattered. One day, Soundwave is off-duty at a bar-esque establishment. Some minor 'Cons and Neutrals are playing the Cybertronian equivalent of a high-stakes card game for a battered, chained up Jazz. Soundwave includes himself in the game. Kinks: Cue Soundwave getting an Autobot! Chapter 1 In the end, it took the combined efforts of the twins to tear Soundwave from his work console. That was how he'd come to be here, lurking alone in the shadowed recesses of a booth in one of Cybertron's new pubs. There were even other Decepticons, and those were mechs that everyone knew. "What did I say about opening your mouth tonight, slave? " "Not to do it, because you don't like it when I make you look stupid.

" The table erupted in laughter and Skywarp cuffed Jazz so hard he nearly knocked his head against Thundercracker's chair. "You'll pay for that one later tonight," Skywarp promised him. "Participation, desired. " Disappointed daddy kink. Sound and Fury Chapter 1: Fury, a transformers/beast wars fanfic. Transformers / Ho Yay. "You're mine. 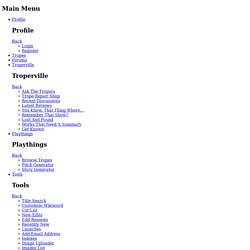 Don't even bother resisting; you'll only make it worse, and that could be painful. " — Megatron (to Starscream) Since Cybertronians are a gender neutral species with a suspiciously large percentage of characters considered male, Ho Yay and Foe Yay collapse into themselves in an explosion of pink energon, purple Big Bads, and *ahem* brotherhood.Might as well put it all together in one easily accessible page. You know, for efficiency. open/close all folders Prowl/Jazz Prowl is an uptight security officer, Jazz is a funky spy. The Late Game — Title: Pillow Talk  Based on This Post,  One-sides...

These Games We Play Chapter 1, a transformers/beast wars fanfic.