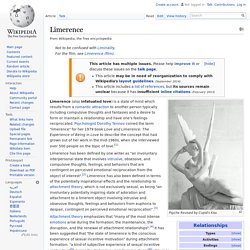 Limerence has been defined by one writer as "an involuntary interpersonal state that involves intrusive, obsessive, and compulsive thoughts, feelings, and behaviors that are contingent on perceived emotional reciprocation from the object of interest".[2] Limerence has also been defined in terms of the potentially inspirational effects and the relationship to attachment theory, which is not exclusively sexual, as being "an involuntary potentially inspiring state of adoration and attachment to a limerent object involving intrusive and obsessive thoughts, feelings and behaviors from euphoria to despair, contingent on perceived emotional reciprocation”.[3] Characteristics[edit] Rapist Types and Methods of Avoidance. Rapist Types and Methods of Avoidance Power Rapists – Goal to Humiliate q Power Reassurance (a.k.a. 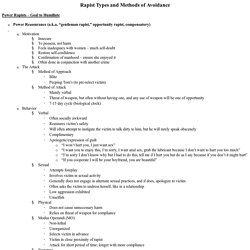 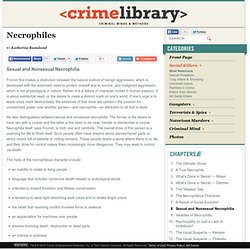 Rather, it is a failure of character rooted in human passion. It is about existential need, or the desire to make a distinct mark on one's world. If one's urge is to leave one's mark destructively, the extremes of that drive are sadism—the passion for unrestricted power over another person—and necrophilia—an attraction to all that is dead. He also distinguishes between sexual and nonsexual necrophilia. The former is the desire to have sex with a corpse and the latter is the need to be near, handle or dismember a corpse. The traits of the necrophilous character include: Fromm believed that Adolf Hitler was the perfect example of a necrophilous character, and to illustrate this he analyzed Hitler's life at length, from childhood to his death by suicide. What Makes Serial Killers Tick? — Monsters or Victims? "It was an urge. ... 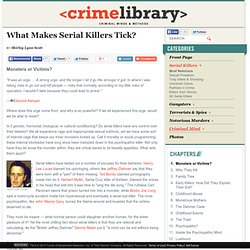 A strong urge, and the longer I let it go the stronger it got, to where I was taking risks to go out and kill people — risks that normally, according to my little rules of operation, I wouldn't take because they could lead to arrest. " —Edmund Kemper Where does this urge come from, and why is so powerful? 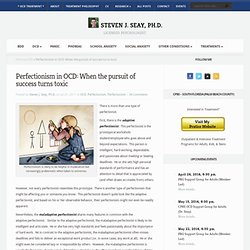 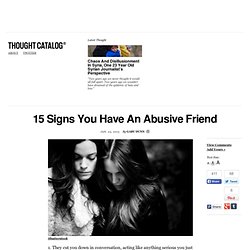 They cut you down in conversation, acting like anything serious you just said is stupid and eye-roll worthy. 2. They invite you somewhere, don’t give you the details and then the next morning act all apologetic when you missed it. They just wanted you to know that your good time was in their hands. 3. 4. 5. 6. 15 Signs You Have An Abusive Friend. Walking Nightmares for Medical Students: Mycroft on the Examination Couch - Firestorm over London.

Sadists are Not Just Child Sexual Abusers and Serial Killers. The Unthinkable — Children Who Kill and What Motivates Them. Jesse Pomeroy Jesse Pomeroy was fourteen when he was arrested in 1874 for the sadistic murder of a four-year-old boy. 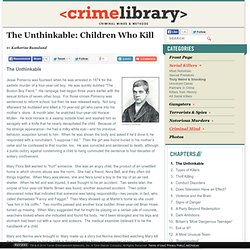 He was quickly dubbed "The Boston Boy Fiend. " His rampage had begun three years earlier with the sexual torture of seven other boys. For those crimes Pomeroy was sentenced to reform school, but then he was released early. Not long afterward he mutilated and killed a 10-year-old girl who came into his mother's store. Mary Flora Bell wanted to "hurt" someone. Mary and Norma were brought in; Mary made up a story but Norma described watching Mary kill the boy. Willie Bosket had committed over two thousand crimes in New York by the time he was fifteen, including stabbing several people. Yet it was his spree and his arrogance that brought about a dramatic change in the juvenile justice system, starting there in New York.

Cindy Collier was 15 and Shirley Wolf 14 when they started prowling condominiums in California in 1983. Eating Disorders: Anorexia and Bulimimia. March 1999 Eating disorders are devastating behavioral maladies brought on by a complex interplay of factors, which may include emotional and personality disorders, family pressures, a possible genetic or biologic susceptibility, and a culture in which there is an overabundance of food and an obsession with thinness. 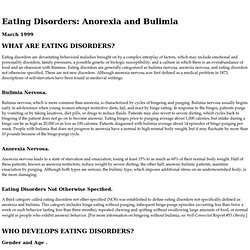 Eating disorders are generally categorized as bulimia nervosa, anorexia nervosa, and eating disorders not otherwise specified. These are not new disorders. Although anorexia nervosa was first defined as a medical problem in 1873, descriptions of self-starvation have been found in medieval writings. The scary trend of tweens with anorexia. More than 60% of elementary and middle school teachers reported that eating disorders are a problem in their schools. Children have a lower percentage of body fat than adolescents and adultsBecause they are still developing, severe cases can permanently affect tweensThe average age for the onset of anorexia used to be 13 to 17. 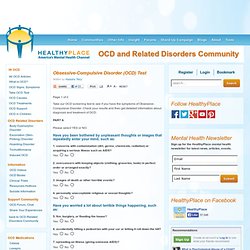 This is a free introductory guide to graphology, and a free handwriting analysis tool pdf download, with examples of techniques that graphologists and handwriting analysis experts use to analyse a person's personality from a sample of handwriting. This free article is contributed by Elaine Quigley BA Hons., MBIG Dip, a leading expert graphologist, and chair of the British Institute of Graphologists. Of Asperger Syndrome and the Neurodiversity Spectrum. Inside Perspectives. Some on the neurodiversity spectrum have Developmental Dyspraxia, with poor fine- or gross motor skills, coordination difficulties, problems copying movements (e.g. in dancing or exercising) or catching a ball, lack of normal muscle tone, joints that are very stiff or overly flexible, balance & posture problems, odd gait, tendency to drop things, bump into things, trip or fall, general poor body control. In a forum poll, about 50% of Aspies had motor problems in one form or another and the other 50% reported no such problems.

“My hands have little fine motor control, which makes handling small objects like needles rather difficult. There are other times when it just feels like my fingers are too big and don’t want to cooperate. I used to enjoy building models, but it got too difficult after a while so I had to give it up. Educating the Student with Asperger Syndrome. Educating the Student with Asperger Syndrome From the Saskatchewan Education Special Education Unit Persons with Asperger syndrome (AS) share some of the same characteristics as individuals with autism, and there is debate on whether AS is an independent diagnostic category or another dimension at the higher end of the autistic continuum (Szatmari, 1995).

Although Asperger syndrome shares some characteristics with higher-functioning autism, there are some unique features, and a different developmental progression and prognosis (Myles & Simpson, 1998) for individuals with AS. According to DSM-IV (1994) criteria, the child must meet the criteria for social impairment, repetitive activities and age of onset, but have normal cognitive and language development. AS involves fewer symptoms than autism. Behaviors That May Be Personal Challenges For A Student With An Autism Spectrum Disorder.

These forms were adapted from the Technical Assistance Manual on Autism for Kentucky Schools by Nancy Dalrymple and Lisa Ruble, which is an excellent resource for parents, teachers, and special education personnel. For information on how to receive a copy of this manual please contact: Anne Moll Kentucky Department of Education 17th Floor CPT 500 Mero Street Frankfort, KY 40601 (502)564-2672 The cost, which will be nominal in order to cover copying costs, has not yet been determined. NOTE: Copies of the IEP/ARD Documents may be downloaded for personal,educational,or medical use without seeking permission. Motor Clumsiness. One of the first indicators of motor clumsiness is that some children with Asperger's syndrome learn to walk a few months later than one would expect (Manjiviona and Prior 1995). Combat Sadomasochist. Wyvern Rhadamanthys: This time I will rip out your heart!