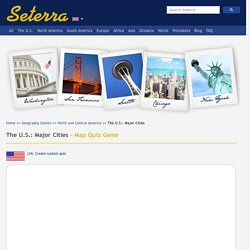 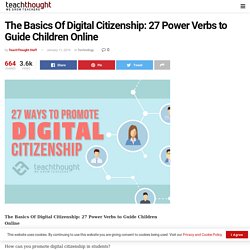 We’ve offered that the definition of digital citizenship can be thought of as, roughly, “The quality of habits, actions, and consumption patterns that impact the ecology of digital content and communities.” In short, citizenship online and offline is very similar. It boils down to treating people and places with the respect and care required to help them thrive. But of course, there are some differences between digital and physical spaces, and in the infographic below, Mia MacMeekin provides 27 tips to help children (and adults) practice quality digital citizenship habits. 1.Use Use technology to gather information, communicate, or just have fun. 2.

Engage in the world through social media. 3. Respect others’ point of view online. 4. Give the author/creator credit for any work you use, remix, or repurpose. CyberSmart! Find Lessons & Resources. Prepositions with pictures. Prepositions for Kids! Prepositions with Pictures! Learn English Preposition pictures with example sentences, videos and ESL worksheets. Learn prepositions of place and movement for kids. Prepositions with Pictures for Kids Prepositions of Place Prepositions for kids: list of Prepositions of Place with examples. In – My parents live in New Zealand now.On – The town is right on the border.Under – We slept under the open sky.Next to – The hotel is situated next to the lively bustling port.Between – There is a gulf between the two cities.Among – I enjoy being among my friends.In front of – They massed in front of the city hall.Behind – The horse fell behind in the race.Above – Our friends in the apartment above us are really noisy.Below – He dived below the surface of the water.Near – There is a bush near the school playground.Far from – The children don’t go far from home.At – I was waiting at the bus stop.

Prepositions with Pictures and Examples At Example: I saw a cat at the window. Above Below. Unit 6 Picture Dictionary. Countable and uncountable food - pictionary. Europe. Europe is the second smallest of the seven continents covering roughly 2% of the earth’s surface. 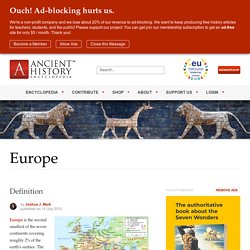 The name 'Europe’ has long been thought to have been derived from the ancient myth of Zeus and Europa. According to this tale, the great god Zeus, seeing the lovely Phoenician princess Europa bathing (or, according to other versions, playing with her handmaidens) by the sea shore, transformed himself into a magnificent white bull and slowly approached her from the sea. So gentle and sweet was this bull that Europa placed garlands of flowers around his neck, petted him and then climbed onto his back when, much to her surprise, the bull ran off across the surface of the seas, abducting her to the isle of Crete. On Crete Zeus and Europa became lovers and she bore him three famous sons. This Article has been reviewed for accuracy, reliability and adherence to academic standards prior to publication.