We're with her. Terrorists are taking advantage of the loopholes in our gun laws. Here's how we stop them. Clinton Leads Trump on Orlando Massacre Response, Trust to Handle Terrorism (POLL) Americans overwhelmingly support barring gun purchases by individuals on the FBI’s terrorist watch list — an initiative that has thus far failed in Congress. 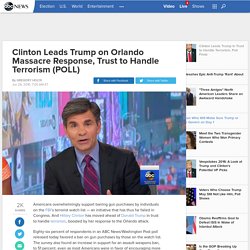 And Hillary Clinton has moved ahead of Donald Trump in trust to handle terrorism, boosted by her response to the Orlando attack. Eighty-six percent of respondents in an ABC News/Washington Post poll released today favored a ban on gun purchases by those on the watch list. The survey also found an increase in support for an assault weapons ban, to 51 percent, even as most Americans were in favor of encouraging more people to carry guns legally for self-defense.

With broad worries about other lone-wolf attacks, most favored increased surveillance of suspected terrorists, even if that intrudes on privacy rights. See PDF for full results and charts. Mirroring her rebound in the race for the White House, Clinton led Trump, 50 percent to 39 percent, in trust to handle terrorism in this poll, produced for ABC by Langer Research Associates. Donald Trump's Response To The Orlando Shooting Was Downright Horrific. Video From Inside Pulse Nightclub. "We're with her." "We’re not going to legislate hate away, but we can pass laws to make hate less deadly." "Americans overwhelmingly support barring gun purchases by individuals on the FBI’s terrorist watch list — an initiative that has thus far failed in Congress." "If clubgoers had guns, Orlando tragedy wouldn't have been as bad"

Watch these 49 celebrities pay powerful tribute to victims of the Orlando shooting. This video from the Human Rights Campaign pays tribute to the 49 victims of the mass shooting at Pulse nightclub in Orlando, and features celebrities like Lady Gaga, Kerry Washington, George Lopez, Laverne Cox and many others. 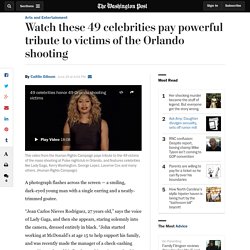 (Human Rights Campaign) A photograph flashes across the screen — a smiling, dark-eyed young man with a single earring and a neatly-trimmed goatee. “Jean Carlos Nieves Rodriguez, 27 years old,” says the voice of Lady Gaga, and then she appears, staring solemnly into the camera, dressed entirely in black. “John started working at McDonald’s at age 15 to help support his family, and was recently made the manager of a check-cashing store. He purchased his first home this spring, so that his mother could live there, too.” So begins a powerful video tribute, “Stop the Hate,” released Wednesday by the Human Rights Campaign and dedicated to the 49 victims of the June 12 shooting rampage at Pulse nightclub in Orlando. 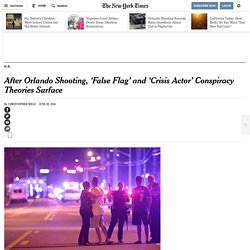 But some posts on the massacre that claimed 49 lives also included a curious phrase: “false flag.” It was a code used by conspiracy theorists to signal their belief that the government had staged the massacre and the information the public was reading and hearing from the mainstream media was untrue. The victims in the shooting? They were “crisis actors” hired to promote the story as a pretext to impose tighter gun restrictions, the theory goes. It is easy to dismiss such beliefs as preposterous and to think of them as coming from a paranoid fringe of society that deeply distrusts the government, but such theories are pervasive.

The term false flag relates to naval warfare when a ship would fly a flag that would conceal its true identity as a way to lure an enemy closer. OPEN Graphic The phrase has even been used to doubt the Sept. 11 terrorist attacks. 911 written logs from Orlando nightclub shooting released. ORLANDO, Fla. - Police dispatchers heard repeated gunfire, screaming and moaning from patrons of the Pulse nightclub who called to report that gunman Omar Mateen was opening fire inside the club, according to written logs released Tuesday. 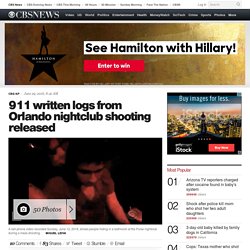 The logs provide the a new glimpse of the horror of the Orlando nightclub massacre from the perspective of those inside. Officials had previously only released transcripts of the 911 calls from Mateen. At the beginning, they refused to provide any details of the hundreds of 911 calls made by victims and witnesses during the Orlando shooting to a coalition of news organizations, citing confidentiality under Florida law, and arguing that an ongoing investigation kept the tapes secret. It's not clear why they chose to release the written logs on Tuesday. The first call of "shots fired" came in at 2:02 a.m. and the caller reported "multiple people down. " One caller said Mateen had gone upstairs where six people were hiding. . © 2016 CBS Interactive Inc.