Socialism. Fed up with NHS waiting times? It’s even worse in the US. I have a lot of information about my primary care physician (GP to British readers). 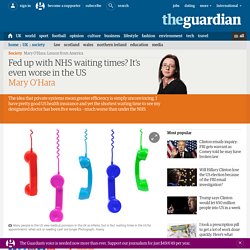 Because the private insurance company publishes it, I’m aware of what university she attended, what degrees she has and I even know her hobbies. But we’ve never actually met. There have been many trips to see the doctor over the past year that I have lived in Los Angeles, but I’ve never managed to get an appointment with the US equivalent of my GP when I needed it, instead being directed to the equivalent of a locum. The shortest waiting time offered to see my designated doctor was five weeks. Otherwise it’s been over two months. Overview of the UK population - Office for National Statistics. The changing UK population. Understanding the size and characteristics of a country’s population is vital when it comes to planning and delivering services like education, transport and healthcare. 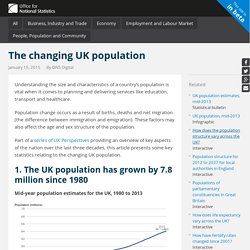 Ageing population. Population trends People born in the baby boom just after the Second World War will reach their late 80s by 2035 – and are more likely to reach that age than the previous generation. 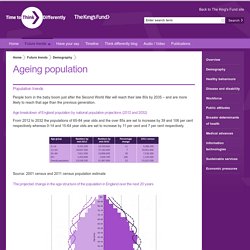 Social care funding and the NHS. The impact of funding cuts to the NHS has been widely reported and discussed, but less attention has been given to social care – and, most importantly, to the inter-relationships of health and social care. 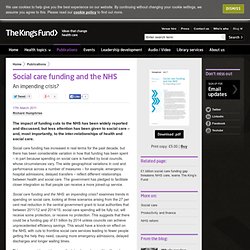 Social care funding has increased in real terms for the past decade, but there has been considerable variation in how that funding has been spent – in part because spending on social care is handled by local councils, whose circumstances vary. The wide geographical variations in cost and performance across a number of measures – for example, emergency hospital admissions, delayed transfers – reflect different relationships between health and social care. The government has pledged to facilitate closer integration so that people can receive a more joined-up service. UK social policy. Insurance. Companies. Health care in the United States. Health care in the United States is provided by many distinct organizations.[1] Health care facilities are largely owned and operated by private sector businesses. 62% of the hospitals are non-profit, 20% are government owned, 18% are for-profit.[2] The United States life expectancy of 78.4 years at birth, up from 75.2 years in 1990, ranks it 50th among 221 nations, and 27th out of the 34 industrialized OECD countries, down from 20th in 1990.[3][4] Of 17 high-income countries studied by the National Institutes of Health in 2013, the United States had the highest or near-highest prevalence of infant mortality, heart and lung disease, sexually transmitted infections, adolescent pregnancies, injuries, homicides, and disability. 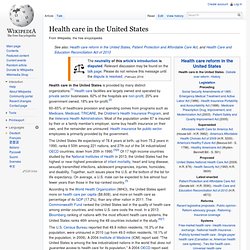 Together, such issues place the U.S. at the bottom of the list for life expectancy. On average, a U.S. male can be expected to live almost four fewer years than those in the top-ranked country.[5] The U.S. History[edit] Statistics[edit] Providers[edit] Facilities[edit] Healthcare-Providers. Semo.insurance. Health Care Reform. HealthCare Reform. VPN. ObamaCare. Health Politics. World Health Organization. Social & Public Service Reform. Setting the Record Straight: Labour and the NHS. So, it’s the silly season again, and politicians are once more gripped by an irrational argument. 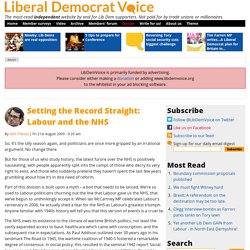 No change there. But for those of us who study history, the latest furore over the NHS is positively nauseating, with people apparently split into the camps of those who decry its very right to exist, and those who suddenly pretend they haven’t spent the last few years grumbling about how it’s in dire need of reform. Part of this division is built upon a myth – a boil that needs to be lanced. We’re so used to Labour politicians churning out the line that Labour gave us the NHS, that we’ve begun to unthinkingly accept it. When Ian McCartney MP celebrated Labour’s centenary in 2006, he actually shed a tear for the NHS as Labour’s greatest triumph. NHS managing bodies. Chapter 1. 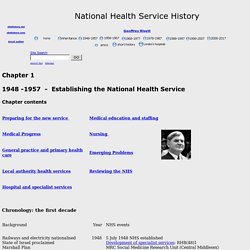 The start of the NHS. The history of the NHS is that of an organisation established after a century's discussion on the provision of health services to meet a long recognised need. 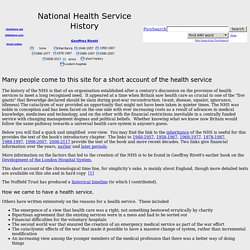 It appeared at a time when Britain saw health care as crucial to one of the "five giants" that Beveridge declared should be slain during post-war reconstruction. (want, disease, squalor, ignorance, idleness) The cataclysm of war provided an opportunity that might not have been taken in quieter times. The NHS: what can we learn from history? What was British health care like before the NHS? 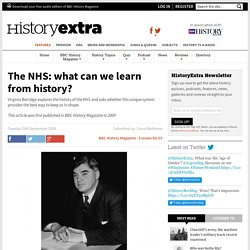 The organisation of health care in Britain before 1948 – and access to it – had significant drawbacks. In 1911, the chancellor, Lloyd George, established a system of National Health Insurance. This offered benefits to the contributor below a certain level of income, and did not include dependants. Back to the future: healthcare before the NHS. Two television documentaries on UK healthcare before the NHS have eerie resonance with current moves to marketise the NHS, says Peter Davies How much better our healthcare system would surely be if it was based on those most noble human impulses—self help, voluntary effort, and charitable giving; reinforced, perhaps, with a diversity of providers troubled by the very minimum of regulation. 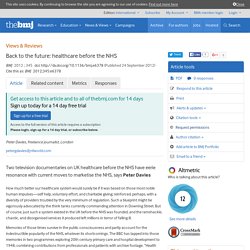 Such a blueprint might be vigorously advocated by the think tanks currently commanding attention in Downing Street. I remember a pre-NHS Britain. I don't want to see a post-NHS one. I was about 17 when the NHS was founded, and I remember life in Britain before it. I came from a large family. We weren't well off but we weren't impoverished either, though being a large family meant we had to stretch our money a long way.

Money was always an issue when it came to seeing the doctor. Half a crown was the amount I always remember, and when you're only earning shillings, that can be a lot of money. Quite a lot of people simply couldn't afford healthcare. The second world war crystallised the need for good healthcare. Politicians talk a lot about being progressive, about modernisation. The NHS history - NHS England. Since its launch in 1948, the NHS has grown to become the world’s largest publicly funded health service. It is also one of the most efficient, most egalitarian and most comprehensive. The NHS was born out of a long-held ideal that good healthcare should be available to all, regardless of wealth – a principle that remains at its core.

The NHS history - NHS England. WW2 People's War - Timeline. Meet the real William Beveridge. Although no punishment is legally ordained, few crimes are more cruel than intellectual grave-robbing, the misappropriation of someone's name and legacy. We have just marked the 70th anniversary of the famous Beveridge report, and in a week when the welfare state is said to be imperilled by the present government, its supposed begetter has been lauded on all sides.

Shirley Williams sings the praises of Beveridge on Radio 4, while Will Hutton names him as his hero. But do these admirers really know about their idol?