Why isn’t the fashion industry more diverse? Runway Diversity Report Fall 2016 - theFashionSpot. Zac Posen Fall 2016; Image: Imaxtree For every influential designer that takes a stand for inclusion on the runway, there’s another that dismisses the need for diversity altogether. 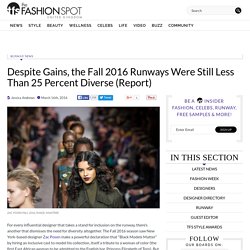 The Fall 2016 season saw New York-based designer Zac Posen make a powerful declaration that “Black Models Matter” by hiring an inclusive cast to model his collection, itself a tribute to a woman of color (the first East African woman to be admitted to the English bar, Princess Elizabeth of Toro). But across the pond in Paris, one of the brightest stars in the industry, Demna Gvasalia, only hired one nonwhite model to walk the runway at Balenciaga. Given the many rave reviews the collection garnered, the racial makeup of his cast seemed like an afterthought. Balenciaga Fall 2016; Image: Imaxtree. This season’s fashion week diversity stats are in.

This season we’ve seen a number of models take to the runway who deviate from fashion’s skinny, white, cis-gender norm. 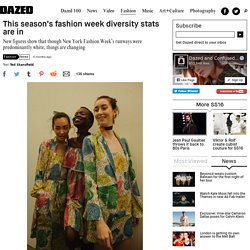 Brands such as Vejas, Vaquera and Hood By Air have led the way, rejecting homogenity in their casting. But statistically speaking, how did SS16 fare in terms of racial diversity? A new report compiled by The Fashion Spot shows that out of New York Fashion Week’s 143 shows and 3,727 spots on the runway, 71.6 per cent of models were white and that 28.4 per cent were non-white (10.7 per cent black, 8.7 per cent Asian and 4.2 per cent Latina). These statistics show that NYFW’s catwalks were still disproportionately Caucasian in comparison to the ethnic make-up of the city, the population of which is 44.6 per cent white. But how do these figures compare to previous seasons? “Diversity innovation has begun and some in the fashion industry have woken up to the influence they can choose to have if they want to operate as enlightened practitioners,” – Caryn Franklin. 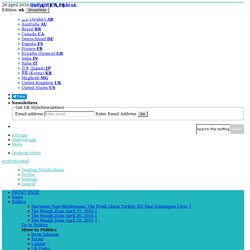 Catwalk models tend to have a very uniform look with little variation between the individuals' skin tone and body type. How Do Independent Magazines Make Money? LONDON, United Kingdom — In our increasingly digital world, where the average time spent with print magazines has fallen 19 percent in the past five years, according to a report by media agency Zenith Optimedia, it is often observed that independent fashion magazines are nonetheless seeing a resurgence. 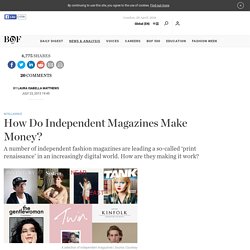 Today, newsstands have never looked so inviting. Rainbow rows of matte-papered, ice cream coloured fashion magazines cover every inch of space. Journalist Ruth Jamieson has compiled a book of the world’s best independent magazines, MagCulture has organised conferences on them and the London Edition Hotel has created a dedicated independent magazine library, featuring a host of indie magazines. But what are the business models behind these titles? The most obvious revenue stream available to titles is the cover price of the magazine. “Paper is a luxury material and I think that consuming our magazine is a luxurious experience. Editor’s Note: This article was revised on 24 July, 2015. Allwalks.org. JOHANNALONDINIUM - JOHANNA LONDINIUM. ADIDAS - Jeremy Scott for Adidas ORIGINALS eau de toilette 75ml.

British Fashion Council - BFC Policy. BFC Policy 10 September 2014 Diversity The BFC is committed to diversity, believing that the fashion industry is one of the most socially inclusive sectors in this country. 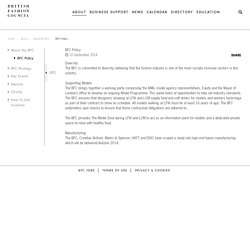 Supporting Models The BFC brings together a working party comprising the AMA, model agency representatives, Equity and the Mayor of London’s office to develop an ongoing Model Programme. Manufacturing The BFC, Creative Skillset, Marks & Spencer, UKFT and DISC have scoped a study into high end luxury manufacturing which will be delivered Autumn 2014. 15 Fashion Ads That Celebrate Diversity. When thinking about the wide world of fashion, do the words diverse, all-inclusive and multicultural come to mind? 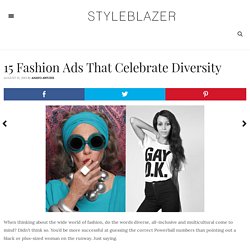 Didn’t think so. You’d be more successful at guessing the correct Powerball numbers than pointing out a black or plus-sized woman on the runway. Just saying. Some brands have put their marketing teams to work, and have come up with unique and progressive ads that give the less represented some shine (and ahem, fashion brands, the more representative your ads are, the more your sales will increase.)Diversity isn’t always black and white, it’s the ability to be inclusive of all people no matter the differences between them (how’s that for a bumper sticker?)

Here are 15 fashion ads that celebrate diversity and promote inclusiveness. Debenham’s Customers of Debenham’s are not all the same size or health status, and their ads beautifully reflect that. Prada Malaika Firth is the first black model to appear in a Prada campaign in 20 long years. Dolce & Gabbana Tom Ford.