RealDoll is working on a sex robot that uses virtual reality. In case you needed a reminder that “lonely men with lots of disposable income” is a great target demographic for your products, well here you go: The New York Times just profiled a company that has sold more than 5,000 “customizable, life-size” sex dolls, which range in price from $5,000 to $10,000. 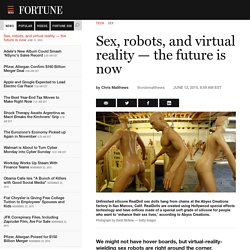 But the story doesn’t stop there (although perhaps it should). The company, called RealDoll, is working on a project, called Realbotix, which will take its lifelike dolls and turn them into fully-fledged sex robots. Intelligent machines: Will we accept robot revolution? Image copyright Thinkstock Would you share your home with a robot or work side by side with one? 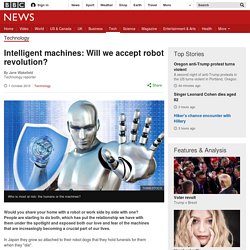 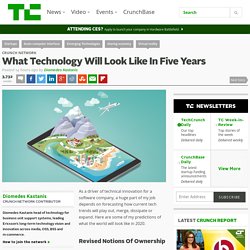 How to join the network As a driver of technical innovation for a software company, a huge part of my job depends on forecasting how current tech trends will play out, merge, dissipate or expand. The Insane and Exciting Future of the Bionic Body. The Push to Include an Art Category in the Apple App Store. +ArtApp wants to make art a prominent category in the application market as finding art-related apps currently takes much digging Shopping. 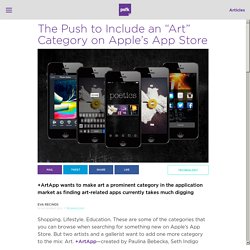 Lifestyle. Education. These are some of the categories that you can browse when searching for something new on Apple’s App Store. But two artists and a gallerist want to add one more category to the mix: Art. As the creators explain, most of the apps related to art or museums usually get classified into the Education and Lifestyle categories. Ingestible Bio-Bots Design the Healthy Body of the Future. Futures Director at Pearlfisher on how ingestibles, smart pills and broadband-enabled digital tools will give us a clearer picture of our internal health Health has become a top priority for many of us. 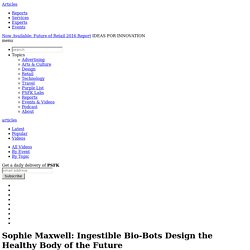 We want to take responsibility and find ways to be more proactive when it comes to managing it. Increasingly we are looking for the most natural solutions to facilitate this; through our new connections and sources of information, we now have access to more resources on a daily basis. Nano-scale 'fingerprint' could boost security. Image copyright Lancaster University An atomic-scale fingerprint could boost the security of connected devices, according to British scientists who have developed it. 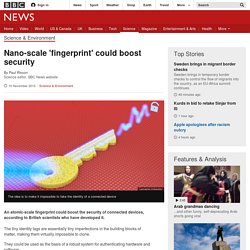 The tiny identity tags are essentially tiny imperfections in the building blocks of matter, making them virtually impossible to clone. They could be used as the basis of a robust system for authenticating hardware and software, Details of the work are published in the journal Scientific Reports. Phones need 'bed mode' to protect sleep. Image copyright Thinkstock Smartphones, tablets and e-readers should have an automatic "bedtime mode" that stops them disrupting people's sleep, says a leading doctor. 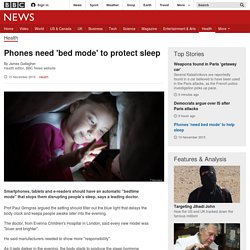 Prof Paul Gringras argued the setting should filter out the blue light that delays the body clock and keeps people awake later into the evening. The doctor, from Evelina Children's Hospital in London, said every new model was "bluer and brighter". He said manufacturers needed to show more "responsibility". As it gets darker in the evening, the body starts to produce the sleep hormone melatonin - which helps people nod off. Certain wavelengths of light, those at the blue-green end of the spectrum, can disrupt the system. Prof Gringras was part of a study, published in Frontiers in Public Health, analysing the light emitted by devices. It concluded there was a clear trend for new devices to be bigger, brighter, have higher levels of contrast and emit more blue light.

20 Furniture Marvels For The Futuristic Home. Design will keep changing to suit the most current of trends, tastes and functionality needs of today’s buyers. 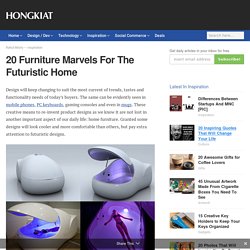 The same can be evidently seen in mobile phones, PC keyboards, gaming consoles and even in mugs. These creative means to re-invent product designs as we know it are not lost in another important aspect of our daily life: home furniture. Granted some designs will look cooler and more comfortable than others, but pay extra attention to futuristic designs. Plugged-In Over Preppy: Teenagers Favor Tech Over Clothes. Photo. 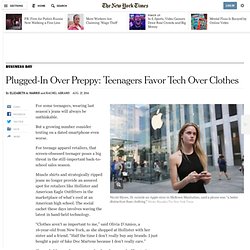 Future - The private investigator who spies using drones. Future - Will machines eventually take on every job? It’s a booming time to be a truck driver. 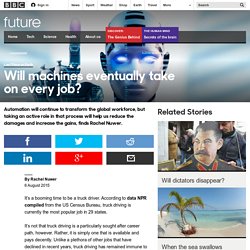 According to data NPR compiled from the US Census Bureau, truck driving is currently the most popular job in 29 states. It’s not that truck driving is a particularly sought after career path, however. Rather, it is simply one that is available and pays decently. Unlike a plethora of other jobs that have declined in recent years, truck driving has remained immune to the forces that have elbowed out different lines of work. In the past decades, computers, cash machines and self-serve pumps have largely replaced secretaries, bank tellers and gas station attendants, respectively. Future - The glove that transmits ‘touch’ over the internet.