Locke & Key (TV series) Fringe (TV series) Critical reception was at first lukewarm but became more favorable after the first season, when the series began to explore its mythology, including parallel universes and alternate timelines. 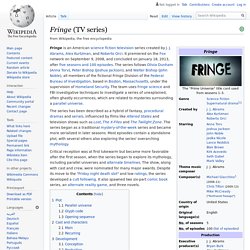 The show, along with cast and crew, were nominated for many major awards. Despite its move to the "Friday night death slot" and low ratings, the series developed a cult following. It also spawned two six-part comic book series, an alternate reality game, and three novels. Marketing posters used to promote the series often featured one of the glyphs used in the show's interstitial, each being a twist on a common image. Pictured here is a leaf with an embedded Greek capital letter delta. Mark Valley played Olivia's partner and lover, John Scott, in the first season. Seth Gabel, a guest star during seasons 2 and 3, joined Fringe as a series regular in season 4 as agent Lincoln Lee. The Flash (2014 TV series) 2014 American superhero television series Initially envisioned as a backdoor pilot, the positive reception Gustin received during two appearances as Barry on Arrow led to executives choosing to develop a full pilot to make use of a larger budget and help flesh out Barry's world in more detail. 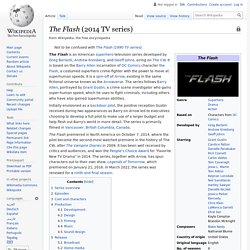 The series is primarily filmed in Vancouver, British Columbia, Canada. Series overview Cast and characters Production Development Design Filming Music Sound design Release Broadcast Home media Reception Ratings Critical response Accolades Other media Digital comic The Chronicles of Cisco Promotional shorts Chronicles of Cisco: Entry 0419 Stretched Scenes Video games. Haven (TV series) American/Canadian television series Over time, Parker, who eventually quits the FBI to join the Haven Police Department, begins to realize that her arrival in Haven may have been pre-arranged and that her name and even her memories may not be her own. 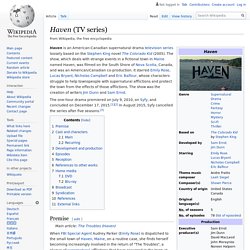 As the series progresses, she learns more about the mysteries of both Haven and her true identity. She and her partner, police detective Nathan Wuornos (Lucas Bryant), find themselves frequently facing problems caused by both the effects of the Troubles, as well as the activities of town folk who take more drastic measures against those who are Troubled. View of Lunenburg. The shoreline can be seen in various Haven episodes. Salem (TV series) Roswell (TV series) Daniel Hansen as Young Max (season 1)Sebastian Siegel as BradCarroll Baker as Grandma Claudia (season 1)Jonathan Frakes as Himself (seasons 1 and 3)Genie Francis as Queen Mother of Antar (season 1)Erica Gimpel as Agent Susan DuffHowie Dorough as Alien (season 1)Nelly Furtado as Herself (season 2)Jason Dohring as Jerry (season 2)Spence Decker as Kivar (season 3)Morgan Fairchild as Maris Wheeler (season 3)Joe Pantoliano as Kal Langley (season 3)John Billingsley as Himself (season 3) Vasquez Rocks Natural Area Park. 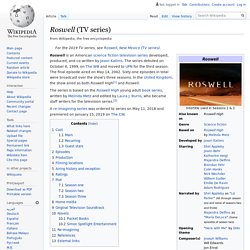 The Pilot is set in 1999. We are introduced to Liz Parker, Maria DeLuca, and Alex Whitman, high school students and best friends residing in the small town of Roswell, New Mexico, site of the famed Roswell UFO incident. Liz Parker's parents own the Crashdown Café, which serves alien-themed dishes. At the beginning of The Pilot, Liz is waitressing in her parents' restaurant when a disagreement between two customers breaks out. Supernatural (American TV series) American dark fantasy television series Production Conception and creation. 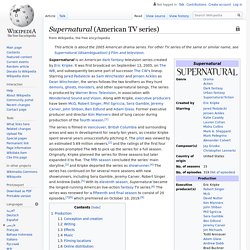 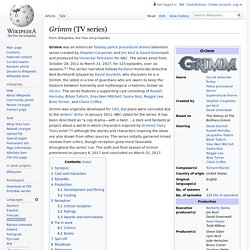 Opening: "There once was a man who lived a life so strange, it had to be true. Only he could see what no one else can—the darkness inside, the real monster within, and he's the one who must stop them. This is his calling. This is his duty. This is the life of a Grimm. " Many of the episodes are loosely based on stories published by the Brothers Grimm, albeit with considerable artistic license taken. The 100 (TV series) 2014 American science fiction television series In the second season, 48 of the remaining 100 are captured and taken to Mount Weather by the Mountain Men. 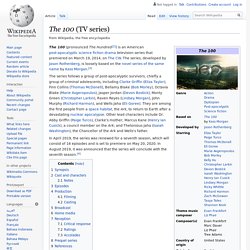 It is eventually revealed that the Mountain Men are transfusing blood from imprisoned Grounders as an anti-radiation treatment as their bodies have not adapted to deal with the remaining radiation on Earth. Medical tests of the 100 show an even more potent anti-radiation efficacy: their bone marrow will allow the Mountain Men to survive outside containment. Lost (TV series) American television series (2004–2010) Season 4 focuses on the survivors dealing with the arrival of people from the freighter, who have been sent to the island to reclaim it from Benjamin. 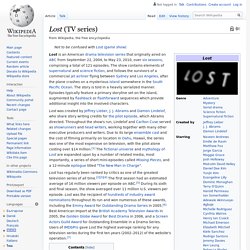 "Flash forwards" continue, in which it is seen how six survivors, dubbed the "Oceanic Six", live their lives after escaping the island. Humans (TV series) 2015 British-American science fiction television series Eight episodes were produced for the first series which aired between 14 June and 2 August 2015. 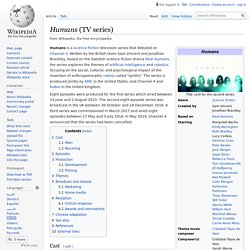 The second eight-episode series was broadcast in the UK between 30 October and 18 December 2016. A third series was commissioned in March 2017 and aired eight episodes between 17 May and 5 July 2018. Jane the Virgin. American telenovela Jane the Virgin is an American romantic dramedy and satirical telenovela developed by Jennie Snyder Urman. 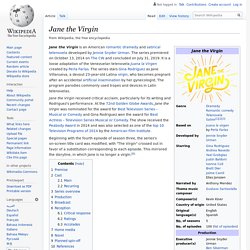 The series premiered on October 13, 2014 on The CW and concluded on July 31, 2019. It is a loose adaptation of the Venezuelan telenovela Juana la Virgen created by Perla Farías. The series stars Gina Rodriguez as Jane Villanueva, a devout 23-year-old Latina virgin, who becomes pregnant after an accidental artificial insemination by her gynecologist. The program parodies commonly used tropes and devices in Latin telenovelas. Jane the Virgin received critical acclaim, particularly for its writing and Rodriguez's performance. Beginning with the fourth episode of season three, the series's on-screen title card was modified, with "The Virgin" crossed out in favor of a substitution corresponding to each episode. Premise[edit] Cast[edit] The Secret Circle (TV series) 2011 American supernatural teen television drama Charles Meade (played by Gale Harold) is Diana's father, he is a member of the previous generation of the Circle.

Following the fire at the Boat Yard, Charles' powers are stripped from him, along with the other surviving members of his Circle. In episode 1, he kills Cassie's mother with magic he got from the crystal.Jane Blake (portrayed by Ashley Crow) is the grandmother of Cassie Blake and mother of Amelia. While initially she acts as though she does not know about the Circle, Cassie eventually realizes that they need her help and tells her the truth.Dawn Chamberlain (played by Natasha Henstridge) is Faye Chamberlain's mother, the principal of Chance Harbor High School, and a member of the previous generation of the Circle. The Vampire Diaries.

2009 American supernatural teen drama television series On April 6, 2015, lead actress Nina Dobrev confirmed via Instagram that she and co-star Michael Trevino (who plays Tyler Lockwood) would be leaving the show after its sixth season. Dobrev returned to record a voiceover for the seventh-season finale and returned as a guest star in the series finale.[3] Trevino appeared as a guest star in season seven and returned for season 8.[4][5] On March 11, 2016, The CW renewed the series for an eighth season,[6] but on July 23, 2016, announced that the eighth season, consisting of 16 episodes, would be the show's last.[7] The final season began airing on October 21, 2016, and ended March 10, 2017.

Series overview[edit] The series is set in the fictional town of Mystic Falls, Virginia, a town charged with supernatural history since its settlement of migrants from New England in the late 18th century.