Serverless Architectures. Like many trends in software, there’s no one clear view of what Serverless is. 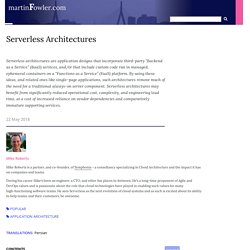 For starters, it encompasses two different but overlapping areas: In this article, we’ll primarily focus on FaaS. Not only is it the area of Serverless that’s newer and driving a lot of the hype, but it has significant differences to how we typically think about technical architecture. BaaS and FaaS are related in their operational attributes (e.g., no resource management) and are frequently used together. The large cloud vendors all have “Serverless portfolios” that include both BaaS and FaaS products—for example, here’s Amazon’s Serverless product page. There is similar linking of the two areas from smaller companies too. A couple of examples UI-driven applications Let’s think about a traditional three-tier client-oriented system with server-side logic. Traditionally, the architecture will look something like the diagram below. The Origins of Serverless. What is Serverless? 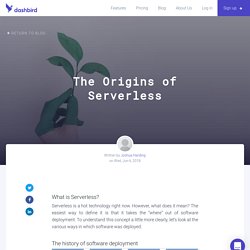 Serverless is a hot technology right now. However, what does it mean? The easiest way to define it is that it takes the “where” out of software deployment. To understand this concept a little more clearly, let’s look at the various ways in which software was deployed. The history of software deployment In the past, systems administrators would prepare physical servers for software to be deployed. 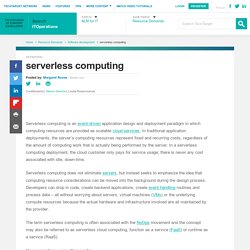 In traditional application deployments, the server’s computing resources represent fixed and recurring costs, regardless of the amount of computing work that is actually being performed by the server. In a serverless computing deployment, the cloud customer only pays for service usage; there is never any cost associated with idle, down-time. Serverless computing does not eliminate servers, but instead seeks to emphasize the idea that computing resource considerations can be moved into the background during the design process. Developers can drop in code, create backend applications, create event handling routines and process data – all without worrying about servers, virtual machines (VMs) or the underlying compute resources because the actual hardware and infrastructure involved are all maintained by the provider. 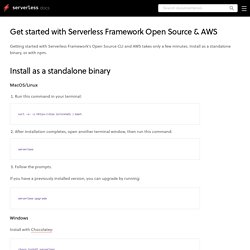 Install as a standalone binary, or with npm. #Install as a standalone binary #MacOS/Linux Run this command in your terminal: curl -o- -L | bash. How to Get Started With Serverless Architecture. Traditionally, when you wanted to build a web app or API, you’d usually have to spend significant time and effort managing servers and ensuring your app scales up to handle large request volumes. 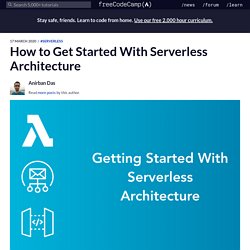 Serverless is a cloud computing model which lets you run applications without having to worry about managing and scaling servers. All you need to do is to upload your code to a cloud provider’s service, and they automatically provision an ephemeral environment. Unlike traditional architectures, it can scale up to handle thousands of requests in an instant, and you only pay for the duration during which your code executes. In this article, we’ll build a simple contact form powered by AWS’s (Amazon Web Services) serverless offering, Lambda. However, serverless is suitable for applications of any complexity or size. Before we get started, we’ll take a closer look at how serverless and Lambda work, and the architecture that we’re going to set up for our contact form. How does AWS Lambda work? Serverless Architecture - Complete Reference Guide [2019] - Hire DevOps. Serverless architecture (also known as serverless computing or function as a service, FaaS), gets us a step closer to independence from humans and brings us much closer to the machine dependency. 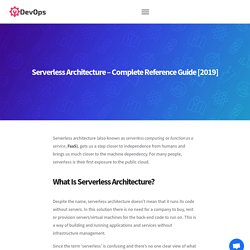 For many people, serverless is their first exposure to the public cloud. Despite the name, serverless architecture doesn’t mean that it runs its code without servers. In this solution there is no need for a company to buy, rent or provision servers/virtual machines for the back-end code to run on. This is a way of building and running applications and services without infrastructure management. Since the term ‘serverless’ is confusing and there’s no one clear view of what serverless is, I encourage you to read the article by Mike Roberts where he gives a deep insight into this term. 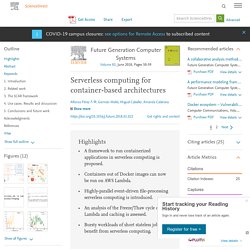 In 2011 he initiated his research career working in medical informatics projects related with clinical prediction models and computer interpretable guidelines. He has been member of the Grid and High Performance Computing research group (GRyCAP) at the Institute for Molecular Imaging (I3M) since 2015 where he began doing research work related with automatic cluster deployment and elasticity.