Carlo Ancelotti. Nicknamed Carletto, Ancelotti played as a midfielder and had a successful career with Roma – captaining the team – with whom he won one Scudetto and four Coppa Italia honours and was part of the legendary late 1980s Milan team with which he won two Scudetti and two European Cups in a five-year period. 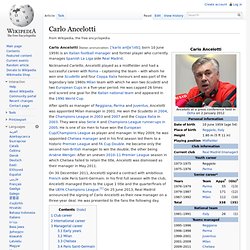 He was capped 26 times and scored one goal for the Italian national team and appeared in the 1990 World Cup. On 30 December 2011, Ancelotti signed a contract with ambitious French side Paris Saint-Germain. In his first full season with the club, Ancelotti managed them to the Ligue 1 title and the quarterfinals of the UEFA Champions League.[1] On 25 June 2013, Real Madrid announced the signing of Carlo Ancelotti as their new manager on a three-year deal. He was presented to the fans the following day.

Iker Casillas. Early life[edit] One weekend as a young child, Casillas forgot to post his father's football predictions on the weekend his father had correctly predicted all 14 results. 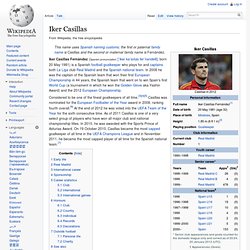 The family lost out on an estimated €1.2m (£1m).[10] Diego López Rodríguez. After spending seven years under contract with Real Madrid, in representation of its various teams, he made a name for himself in La Liga with Villarreal, appearing in 230 official games over the course of five seasons. 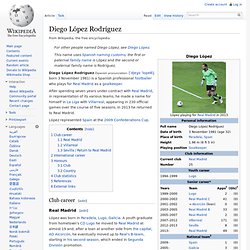 In 2013 he returned to Real Madrid. López represented Spain at the 2009 Confederations Cup. Antonio Adán. Club career[edit] Real Madrid[edit] A Real Madrid youth graduate,[1] Madrid-born Adán was the first-choice goalkeeper for its C-side in the 2005–06 season, playing 36 games and conceding 29 goals. 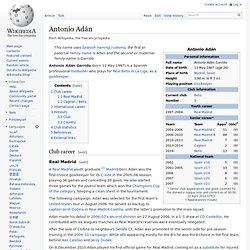 He also started three games for the Juvenil team which won the Champions Cup of the category, keeping a clean sheet in the tournament. Marcelo Vieira. After his breakthrough season, Marcelo was praised by football legends such as Paolo Maldini[3] and Diego Maradona,[4] who also called him the best in his position. 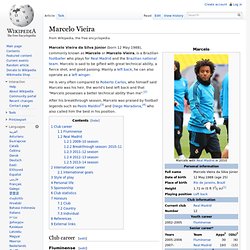 Club career[edit] Fluminense[edit] Marcelo started playing futsal at the age of nine and by the age of 13, he was on the books of Fluminense in Rio de Janeiro. He comes from a very poor background and even considered quitting football, but his club considered him as one of their "crown jewels" and ensured that he continued playing. Álvaro Arbeloa. Arbeloa started his career with Real Madrid, playing mostly with the reserves. 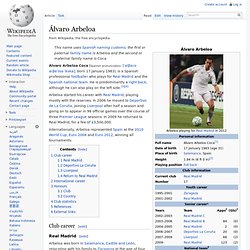 In 2006 he moved to Deportivo de La Coruña, joining Liverpool after half a season and going on to appear in 98 official games over the course of three Premier League seasons. In 2009 he returned to Real Madrid, for a fee of £3,500,000. Internationally, Arbeloa represented Spain at the 2010 World Cup, Euro 2008 and Euro 2012, winning all tournaments. Fábio Coentrão. After starting playing professionally with Rio Ave, he signed for Benfica at 19, going on to be loaned several times before becoming an important member of the first team, as a left-back. 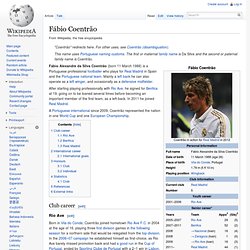 In 2011 he joined Real Madrid. A Portuguese international since 2009, Coentrão represented the nation in one World Cup and one European Championship. Sergio Ramos. Raphaël Varane. He previously played for French club Lens and, ahead of the 2010–11 season, began training with the senior team and appeared on the bench in several league matches. 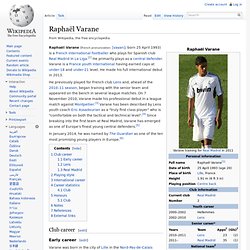 On 7 November 2010, Varane made his professional debut in a league match against Montpellier.[3] Varane has been described by Lens youth coach Eric Assadourian as a "truly first class player" who is "comfortable on both the tactical and technical level".[4] Since breaking into the first team at Real Madrid, Varane has emerged as one of Europe's finest young central defenders.[5] Pepe. During his professional career he played for Marítimo, Porto and Real Madrid, with individual and team success with the latter two clubs. 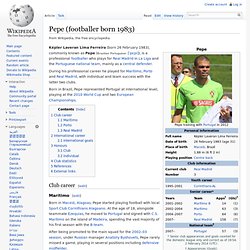 Born in Brazil, Pepe represented Portugal at international level, playing at the 2010 World Cup and two European Championships. Born in Maceió, Alagoas, Pepe started playing football with local Sport Club Corinthians Alagoano. At the age of 18, alongside teammate Ezequias, he moved to Portugal and signed with C.S. Marítimo on the island of Madeira, spending the vast majority of his first season with the B-team. After being promoted to the main squad for the 2002–03 season, under Russian manager Anatoliy Byshovets, Pepe rarely missed a game, playing in several positions including defensive midfielder. 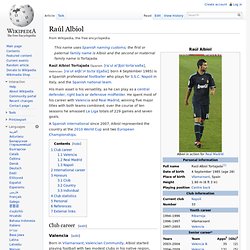 Napoli in Italy, and the Spanish national team. A Spanish international since 2007, Albiol represented the country at the 2010 World Cup and two European Championships. Nacho Fernandéz. Born in Madrid, Nacho arrived in Real Madrid's youth system at the age of 11. He made his senior debuts in the 2008–09 campaign, playing two games with the reserves in Segunda División and subsequently appearing in a further two full seasons in the category. On 2 September 2012 main squad manager José Mourinho announced that Nacho, along with Álvaro Morata and Jesús, would be promoted to the first team, but continue to play with Castilla.[3][4] He became an official full-time first team member at the start of 2013–14, receiving the number 18 shirt after the departure of Raúl Albiol.

After playing for Spain at under-17, under-19 and under-21 levels, Nacho was first called by the full side on 2 September 2013 for a friendly with Switzerland on the 10th, in place of injured Iñigo Martínez.[5] He made his debut by replacing Real Madrid teammate Sergio Ramos early into the second half of the 2–2 draw in Geneva.[6] Daniel Carvajal. Club career[edit] Real Madrid B[edit] Carvajal was born in Leganés, a suburb of Madrid. Sami Khedira. Sami Khedira (German pronunciation: [ˈsami keˈdiːʁa]; Arabic: سامي خضيرة‎; born 4 April 1987) is a German footballer currently playing for Real Madrid and the German national team.

Not to be confused with Brazilian footballer Ronaldo. Ronaldo began his career as a youth player for Andorinha, where he played for two years, before moving to C.D. Nacional. Karim Benzema. Gonzalo Higuaín. Ángel di María.