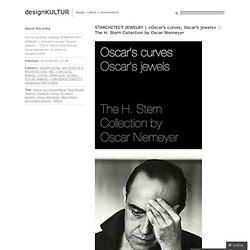 Stern Like this: Oscar niemeyer. The Complete Works of Oscar Niemeyer. Oscar Niemeyer. Interview By Santiago Fernandez-Stelley Photo By Andre Vieira Drawings By Oscar Niemeyer Translated By Daniella Diniz and Danilo Matz Oscar Niemeyer is on the infinitesimally short list of people who have designed and built an entire city. 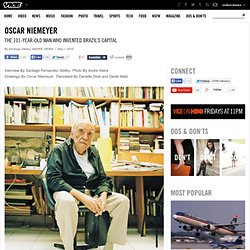 A world capital. Sure, Haussmann made Paris into the postcard background it is today and Wren rebuilt London after the Great Fire (by not building everything out of wood—good thinking!). But it’s not like they were lacking in usable models on which to base their work, considering those cities were already functioning metropolises before they got the re-up.

Niemeyer, though—he took an empty patch of Brazilian countryside and, in four years (and with the layout assistance of Lucio Costa), put a hyperfunctional capital city on the face of the earth. That was 50 years ago, and Niemeyer has been working nonstop ever since. Living for a century has given him a lot of perspective, as in, “architecture-can’t-give-meaning-to-your-life” perspective. Architect Day: Oscar Niemeyer. Every week we're going to post about architects that make or have made history influencing many. 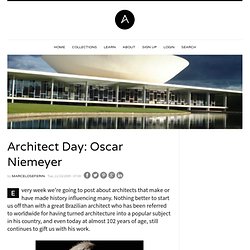 Nothing better to start us off than with a great Brazilian architect who has been referred to worldwide for having turned architecture into a popular subject in his country, and even today at almost 102 years of age, still continues to gift us with his work. Oscar Ribeiro de Almeida de Niemeyer Soares Filho was born in Rio de Janeiro on December 15th, 1907. As a child he was always outlining imaginary buildings in the air with his finger and at times even correcting himself, already searching for the perfection that makes his work today.

He married young at 21 years of age, and with this new responsibility he started to work and went back to school. In 1934 he received his Architecture and Engineering diploma at the School of Fine Arts in Rio de Janeiro. Influences "Well, there were groups, three or four, I don't know, that already worked with those influences… in the line of Corbusier. Works. Oscar Niemeyer, The Architect. Quotes from Oscar Niemeyer (1907-2012) To honor the great Brazilian architect Oscar Niemeyer, who died today, we’ve selected few of his inspiring quotes. 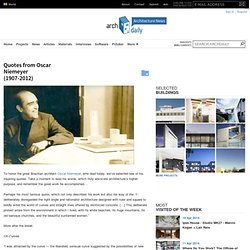 Take a moment to read his words, which truly advocate architecture’s higher purpose, and remember the great work he accomplished… Perhaps his most famous quote, which not only describes his work but also his way of life: “I deliberately disregarded the right angle and rationalist architecture designed with ruler and square to boldly enter the world of curves and straight lines offered by reinforced concrete. […] This deliberate protest arose from the environment in which I lived, with its white beaches, its huge mountains, its old baroque churches, and the beautiful suntanned women.” More after the break: On Curves “I was attracted by the curve — the liberated, sensual curve suggested by the possibilities of new technology yet so often recalled in venerable old baroque churches.” 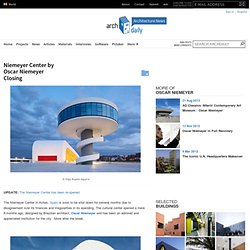 The Niemeyer Center in Aviles, Spain is soon to be shut down for several months due to disagreement over its finances and irregularities in its spending. The cultural center opened a mere 8-months ago, designed by Brazilian architect, Oscar Niemeyer and has been an admired and appreciated institution for the city. More after the break. The Niemeyer Center could have done for Aviles what the Guggenheim has done for Bilbao, according to Janelle Zara of ARTINFO. Unfortunately, Spain economy has stunted such success. The regional government, led by President Alvarez Cascos, continues to look into the center’s finances.

AD Classics: Cathedral of Brasilia / Oscar Niemeyer. Having such a significant history, it can be expected that the architecture of Brasilia reflects the richness and prominence of the culture as a planned city. 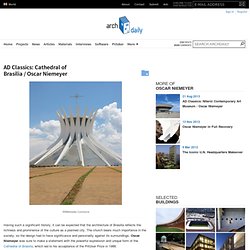 The church bears much importance in the society, so the design had to have significance and personality against its surroundings. Oscar Niemeyer was sure to make a statement with the powerful expression and unique form of the Cathedral of Brasilia, which led to his acceptance of the Pritzker Prize in 1988. More on Oscar Niemeyer and the Cathedral of Brasilisa after the break. The cornerstone was laid in early September of 1958, when designs were beginning to be proposed and thoroughly planned out by Oscar Niemeyer. With a diameter of 70m, the only visible structure of the cathedral being sixteen concrete columns with a very peculiar shape.