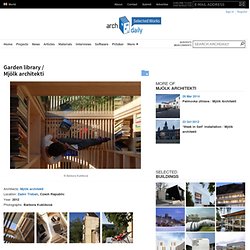 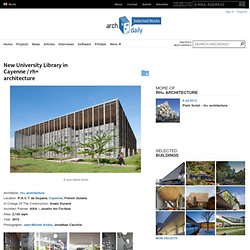 Our aim is to give to this unique building for its program and its central position, a proper architecture – identifiable by its volumetry and its uses – combined to an opening upon the whole University. JAJA Architects. JKMM architects. The building complex showcases Aalto’s exquisite touch from the details of door handles to the scale of urban planning. 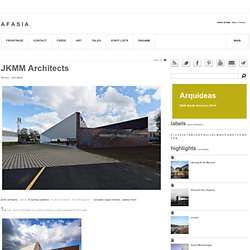 The centre is a masterpiece of modern architecture and a highly valuable cultural environment. The library was completed as part of the civic centre in 1965. An example of Aalto’s famous series of library designs, it served well as the town’s main library for over four decades. MVRDV completes Book Mountain and Library Quarter Spijkenisse. Close to the Port of Rotterdam docks, MVRDV has completed the Spijkenisse Book Mountain, a public library in Spijkenisse’s market square. 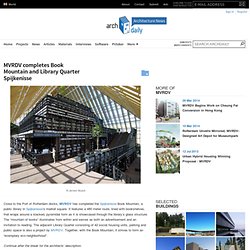 It features a 480 meter route, lined with bookshelves, that wraps around a stacked, pyramidal form as it is showcased through the library’s glass structure. The “mountain of books” illuminates from within and serves as both an advertisement and an invitation to reading. The adjacent Library Quarter consisting of 42 social housing units, parking and public space is also a project by MVRDV. Together, with the Book Mountain, it strives to form an “exemplary eco-neighborhood”. Continue after the break for the architects’ description. The library is designed as an advert for reading, its visible presence and invitation holding great significance for a community with 10 percent illiteracy. LiYuan Library / Li Xiaodong Atelier. Architects: Li Xiaodong Atelier Location: Beijing, China Design Team: Li Xiaodong, Liu Yayun, Huang Chenwen, Panxi Project Year: 2011 Project Area: 175.0 sqm Photographs: Li Xiaodong This project is modest addition to the small village of Huairou on the outskirts of Beijing, just under a two hours drive from busy Beijing urban life. 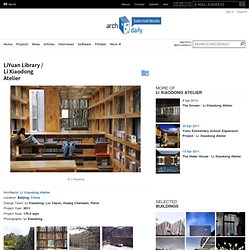 On the one hand it forms a modern programmatic complement to the village by adding a small library and reading space within a setting of quiet contemplation. On the other hand we wanted to use architecture to enhance the appreciation of the natural landscaping qualities. Chemical and Biological Library / Giuseppe Rebecchini. Architects: Giuseppe Rebecchini Location: Ferrara, Province of Ferrara, Italy Design Team: Giuseppe Rebecchini with Chiara Naseddu Photographs: Andrea Cordoni Project Area: 1500.0 sqm Collaborators: Gianluca Freudiani – Antonio Ravalli. 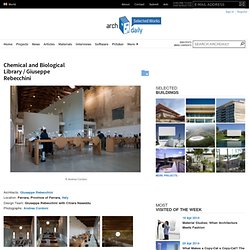 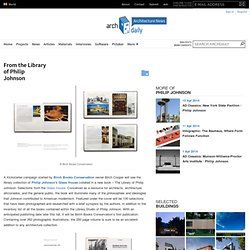 Conceived as a resource for architects, architecture aficionados, and the general public, the book will illuminate many of the philosophies and ideologies that Johnson contributed to American modernism. Featured under the cover will be 100 selections that have been photographed and researched with a brief synopsis by the authors, in addition to the inventory list of all the books contained within the Library Studio of Philip Johnson. With an anticipated publishing date later this fall, it will be Birch Books Conservation’s first publication. 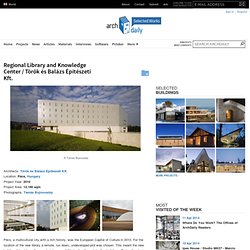 Location: Pécs, Hungary Project Year: 2010 Project Area: 13,180 sqm Photographs: Tamás Bujnovszky Pécs, a multicultural city with a rich history, was the European Capital of Culture in 2010. For the location of the new library a remote, run down, undeveloped plot was chosen. This meant the new building did not have the constraint or possibility to directly match other buildings. During the design process, I aimed to dynamically synthesize the dualities which appear in many ways. Library Of The Present: Communal Information In Physical Space. The Internet is now the library of the past. 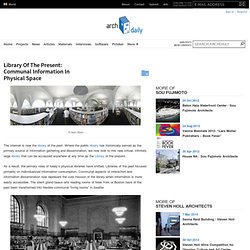 Where the public library has historically served as the primary source of information gathering and dissemination, we now look to this new virtual, infinitely large library that can be accessed anywhere at any time as the Library of the present. As a result, the primary roles of today’s physical libraries have shifted. Libraries of the past focused primarily on individualized information consumption. Communal aspects of interaction and information dissemination now represent the core mission of the library when information is more easily accessible. The silent grand beaux-arts reading rooms of New York or Boston have of the past been transformed into flexible communal “living rooms” in Seattle. 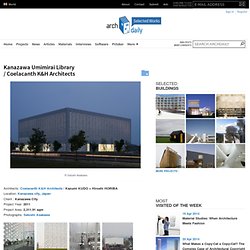 In this sense, the act of creating a space that surrounds you with books is undoubtedly linked to the creation of a new, enriched sense of public values. Libraries in Japan are moving towards a model that encourages readers to stay and linger, instead of their original function as spaces for collecting and lending out books. Reflecting the general trend for libraries to facilitate reading as well as other functions, this library uses compact automated shelves that operate as a closed stack system. Public Library and Music School / Donaire Arquitectos. Architects: Donaire Arquitectos / Juan Pedro Donaire Barbero Location: Huelva, Spain Client: Almonte Town Hall Project Area: 1,725 sqm Project year: 2010 Photographs: Fernanado Alda The project is centered on the “Los Reales de Almonte Warehouse”, registered as being of Cultural Interest, which has been rehabilitated for use as a public library, and School of Arts. Enclosed within a public square, the building is located in the “Ciudad de la Cultura” in Almonte and next to the town’s new Theatre.

Hercules Public Library / will bruder+PARTNERS. The new Hercules Public Library is conceived as a community gathering place and a functionally efficient vessel of knowledge and discovery. Rooted in the landscape and traditions of the town and region, the library draws from diverse eastern and western cultures—tied to the climate of courtyard missions, Eastern gardens, and Northern California. Architect: Will Bruder Architects Location: Hercules, California, USA Project Area: 20,162 sqf Project Year: 2006 Photographs: Bill Timmerman Sited on a raised plinth, the library is a beacon from the freeway, enjoying long vistas from its reading room. The building embraces the street edge and provides a grove for the neighborhood to the east.

The proposed extension to the Central University Library by EXHIBIT Architectura in Cluj Napoca, Romania is an exercise in the design of a contemporary civic, monumental structure among historic, and grandiose institutional buildings. The proposal is an extension, as well as a link between the existing library storehouse and the new building, while creating an outdoor room, or plaza, between the two structures. More on this project after the break. Watha T. Daniel-Shaw Library / Davis Brody Bond. Architects: Davis Brody Bond Aedas Location: Washington DC, USA Co-Lead Designers: Peter Cook, J.

New York will be the recipient of another Steven Holl project – a new library at the Queens West Development at Hunters Point. Envisioned as a contemporary “urban forum”, the project will shape public space and create new connections across the Queens West Development, Hunter Points South, and the existing neighborhood of Hunters Point. Steven Holl states, “We are very pleased with this great commission for an addition to the growing community. We envision a building hovering and porous, open to the public park. A luminous form of opportunity for knowledge, standing on its own reflection in the east river.”

Kanazawa Umimirai Library. Matadero Film Library by CH+QS Arquitectos. The Most Beautiful Libraries in the World.