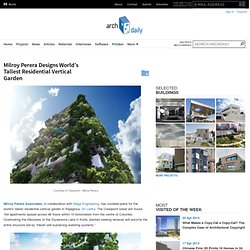 The Clearpoint tower will house 164 apartments spread across 46 floors within 10 kkilometers from the centre of Columbo. Overlooking the tributaries of the Diyawanna Lake in Kotte, planted viewing terraces will encircle the entire structure fed by “inbuilt self-sustaining watering systems.” According to the architects, Clearpoint will “be pioneering sustainable residences in Sri Lanka, with the aim of taking urban living forward while still maintaining a balance with nature and the surrounding environment, the main focus of the apartments being to create a sentiment of ground level living. Measures will be in place to reduce energy and water consumption, including the use of solar energy for communal spaces.” Windows and Terraces Sustainable Air Conditioning Planted Terraces and Drip Irrigation Solar Panels. KMC Corporate Office / RMA Architects. Architects: RMA Architects Location: Cyber City, Hyderabad, India Year: 2012 Photographs: Robert Stephens, Rahul Mehrotra, Courtesy of RMA Architects, Rajesh Vora, Carlos Chen Located in Cyber City, Hyderabad, the corporate buildings employ the idea of a double skin as an energy saving and visually striking device. 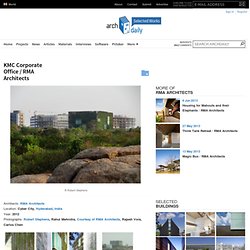 The inner skin of the building is a reinforced concrete frame with commonly used aluminum windows. The outer façade comprises of a custom cast aluminum trellis with hydroponic trays integrated for growing a variety of plant species. The trellis also has an integrated misting system in order to control and regulate the amount of water released to the plants and trays. The principal of the facade is inspired by the idea of a double-skin that allows a modulation of light and air through the building. This is in contrast to the business-as-usual idea of the ‘greenwall’, which is a simple application on a surface purely serving an aesthetic, not a performative function. SOA. After devising the Tour Vivante vertical farm project in 2005, Augustin Rosenstiehl and Pierre Sartoux decided to create an urban agriculture research group within their practice, SOA Architectes. 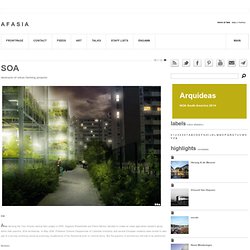 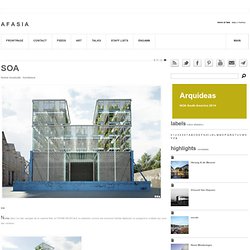 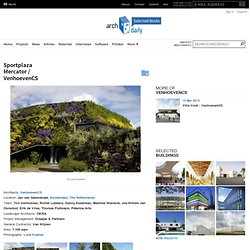 The city district wanted to boost community life in the neighbourhood. The authorities therefore chose a building which combines swimming pools, a therapy pool, fitness, aerobics, a sauna and steam bath, a party centre, café and childcare alongside a fast food restaurant (jobs for the unemployed in the neighborhood). Each individual element attracts different target groups, so the entire population will be able to use it in the end. Art Barn / Robert Young. Architects: Robert Young Location: Greenwich, Connecticut, USA Architect In Charge: Robert Young Project Architect: Aaron Cattani Project Team: Kiyomi Troemner, Jason Shannon, Eleanor Lee, Shea Murdock Year: 2007 Photographs: Michael Moran, Frank Oudeman Designed for a pair of artists, this 10,000-square-foot “Art Barn” features a “green screen” that creates a living skin over the majority of the concrete-block structure. 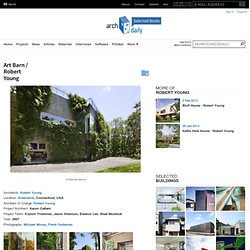 Made of metal mesh planted with white wisteria vines, the screen supports greenery that overlaps windows, frames views of the lake and woodlands, and provides added thermal insulation. The building houses two large multipurpose galleries with 16-foot ceilings and polished concrete floors, and a chef’s commercial-grade kitchen. Biological Concrete for a Living, Breathing Facade. The future of design requires thinking innovatively about the way current construction techniques function so we may expand upon their capabilities. 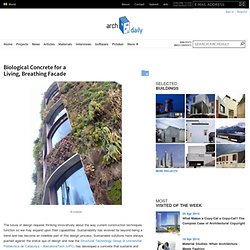 Sustainability has evolved far beyond being a trend and has become an indelible part of this design process. Sustainable solutions have always pushed against the status quo of design and now the Structural Technology Group of Universitat Politècnica de Catalunya – BarcelonaTech (UPC) has developed a concrete that sustains and encourages the growth of a multitude of biological organisms on its surface. We have seen renditions of the vertical garden and vegetated facades, but what sets the biological concrete apart from these other systems is that it is an integral part of the structure. House in Travessa de Patrocinio / Luís Rebelo de Andrade + Tiago Rebelo de Andrade + Manuel Cachão Tojal. Architects: Luís Rebelo de Andrade, Tiago Rebelo de Andrade , Manuel Cachão Tojal Location: Travessa do Patrocínio, Lisbon, Portugal Co Workers: Madalena Rebelo de Andrade, Raquel Jorge, Carlos Ruas & Tiago Moniz Client: BWA – Buildings With Art Area: 248 sqm Year: 2012 Photographs: FG+SG From a small lot with it’s unique implantation, this project has raised early on a couple of challenges… and along with them, ideas emerged. 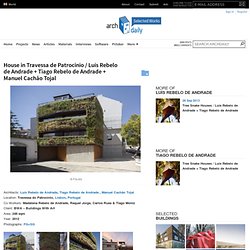 The box housing deviates from the gable to create a vertical yard (glass box), with a straight ladder connecting all floors, an allusion to the famous stairs of Alfama, running between the all 4 floors walls and linking the various dimensions. This courtyard is the heart of the house, bringing light to the interior, enhancing the main entrance and creating a real exterior/interior relationship. Implemented in the heart of a busy city, the vertical garden creates an unique link with nature and an unexpected atmosphere. Flashback: Tower Flower / Edouard François. Architects: Edouard François Location: Paris, France Project Area: 2,600 sqm Project Year: 2004Photographs: Courtesy of Edouard François The Flower Tower was completed in 2004. 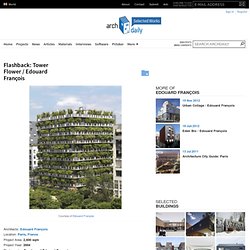 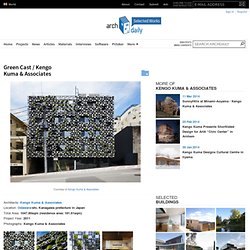 The slightly slanted panels are made of monoblock casting and give an organic appearance, as the cast comes from decayed styrene foam. The five story building was completed in the summer of 2011. Parking is available on the basement and ground floor, along with a pharmacy and clinic. The next two floors provide space for offices and a vocational school, while the fourth floor belongs to a two bedroom residence with access to a private rooftop terrace. Green Building and Climate Resilience: A Report by the U.S. Green Building Council + University of Michigan. As many of us have already realized, sustainable design contributes to an awareness of environmental patterns and thereby creates communities that are more resilient to the devastating effects of the natural disasters that we have seen across the globe in recent months.

Many people have accepted the cause and effect relationship that exists between current practices – those that pollute water and food sources, strip minerals, disturb fault linesand throw off ecosystems – with the rapidly increasing changes in climate. For those that do not, U.S. Stacking green / Vo Trong Nghia + Daisuke Sanuki + Shunri Nishizawa.

Architects: Vo Trong Nghia, Daisuke Sanuki, Shunri Nishizawa (Vo Trong Nghia Co., ltd.) Location: Saigon, Vietnam Photographers: Hiroyuki Oki Whoever wanders around Saigon, a chaotic city with the highest density of population in the world, can easily find flower-pots crampped and displayed here and there all around the streets. This interesting custom has formed the amused character of Saigon over a long period of time and Saigonese love their life with a large variety of tropical plants and flowers in their balconies, courtyards and streets. Skolkovo Residential Area / Arch Group. Skolkovo Innovation Center (‘Russian Silicon Valley’), a high-tech hub to be built at Skolkovo near Moscow, Russia, is intended to concentrate international intellectual capital, thereby stimulating the development of break-through projects and technologies.

The modern approach to residential buildings often creates a feeling of isolation. A person has his or her own apartment and a little garden, while neighbors are perceived as competitors. The new residential area, including apartment houses and townhouses, designed by Arch Group, is designed for temporary accommodation of the scientific elite shown in the apartment houses while the townhouses feature a multi-layered environment. More images and architects’ description after the break.

The complex will be built within the limits of New Ivanovo and Odintsovo townships, near the village of Skolkovo located in the eastern part of Moscow’s Odintsovsky on the Skolkovsky highway, 2 km west of the MKAD Moscow beltway. House at León / ALARCÓN + ASOCIADOS. Architects: Alarcón + Asociados / Alberto Alarcón Location: León, Spain Collaborators: Sara Rojo, Carlos Tomás, Clara García, Heloise Project Year: 2009 Project Area: 310 sqm Photographs: Pablo Cruz, Alberto Alarcón This project is a home that was easily built on a low budget with minimum effort and total warranty.

The spatial model was inspired by traditional chinese architecture with three linked rooms building a domestic space. The rooms are linked yet separated. Buildings Sprout Living Walls by Green Over Grey. White Rock, a small surburb outside of Vancouver, Canada can now boast to having the largest green wall in North America thanks to Green Over Grey, Vancouver, Canada-based company that design and install green walls (also known as living walls).

The once bare 3000 square foot wall is now a lush garden of a wide variety of plant life. It is located on the facade of the Semiahmoo Public Library and RCMP Facility. This living wall is literally a breathing, photosynthesizing skin. A New Wonder of the World. COTE 2011 Top Ten Green Projects. The Committee on the Environment (COTE) has announced the Top Ten Green Projects for 2011. Receiving this honor at the upcoming AIA 2011 National Convention and Design Exposition in New Orleans, the following projects are examples of sustainable architecture and green design solutions that protect and enhance the environment. Celebrating its 15th year, the COTE Top Ten Green Projects program is one of the profession’s highest recognitions for sustainable design excellence.