Should you give police consent to search? No! What You Need to Know About Police Interrogations. A Walk Through The Criminal Case Process With Lords And Cate. How to Deal With Police - Law Office of Lords & Cate, PLLC. You have the right to refuse a search! - Law Office of Lords And Cate, PLLC. If the police are asking permission to search you, that means they DO NOT have the right to search you without your consent- YOU CAN SAY NO! 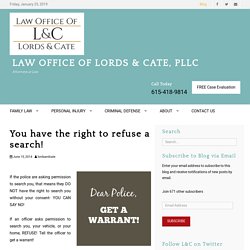 If an officer asks permission to search you, your vehicle, or your home, REFUSE! Tell the officer to get a warrant! Like this: Like Loading... Terry Stop - Blog By Lords and Cate. Officers will always make the claim that they are conducting a “Terry Stop“, but they most often have no idea what that actually is. 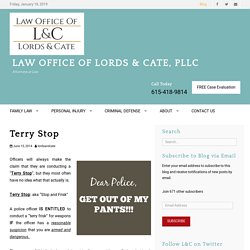 Terry Stop: aka “Stop and Frisk” A police officer IS ENTITLED to conduct a “terry frisk” for weapons IF the officer has a reasonable suspicion that you are armed and dangerous. The purpose of this limited search is not to discover evidence of crime, but to allow the officer to pursue his investigation without fear of violence. An officer cannot reach into your pockets. Three Types of Police-Civilian Interaction. Three Types of Police-Civilian Interaction There are three types of police-civilian interactions, and you need to know how to deal with each of them. 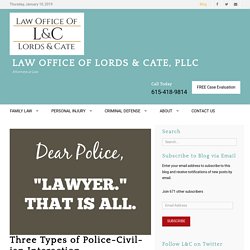 Consensual interaction: This is when a police officer simply starts a conversation with you. You may ask, “Am I free to leave?” If the officer says yes, don’t talk, Walk away immediately! Prevent Getting Pulled Over By The Cops. I worked for a judge in Memphis who told a courtroom full of defendants that if they would simply follow traffic laws, 80% of all arrests would vanish over night, I agree. 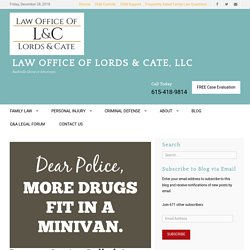 The majority of warrants begin with a traffic stop. I can’t tell you how many clients I have represented who were pulled over for driving 10 or 20 miles an hour over the speed limit while smoking a joint, or having a headlight/tail light out, or something as simple as not using a blinker. Exercise Your Rights Safely When Interacting With the Law. Everyone in Tennessee has rights guaranteed to them by both the Tennessee and the United States Constitutions, it is your responsibility to know your rights and exercise your rights safely. 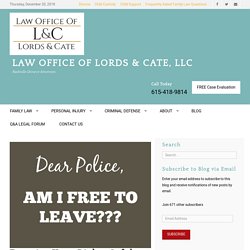 Most people believe that the police know their rights and will respect them, but that is a huge mistake. Police investigate crime, they lie, they manipulate, and they intimidate in an effort to make an arrest (notice I didn’t say “solve crime”). More Prisoners Means Bigger Paychecks for Privately Owned Prisons. Did you know a privately-owned, multi-billion-dollar company, Corrections Corporation of America, benefits from incarcerating citizens, many of which are non-violent offenders? 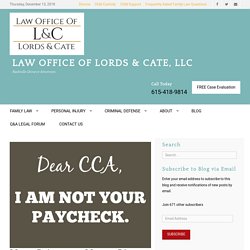 “Executives at Corrections Corporation of America, the nation’s largest private prison company, have imagined this America. Apparently it worries them. In a 2013 annual report, the Nashville-based prison profiteers warned shareholders that these sorts of policy shifts — along with other frightening trends like “reductions in crime rates” — represent a risk to their future returns.” Though I have been aware of this for some time, I was ecstatic to see the Nashville Scene had covered the topic in their May 2014 article titled: CCA has eight lobbyists on Capitol Hill — and yet it says it doesn’t lobby on incarceration issues. Maybe it doesn’t have to. This system has to end. Marital Property Division Cases With Lords And Cate. Property Division Property division is the term used to describe the process of dividing marital property during divorce proceedings in Tennessee. 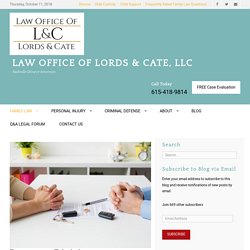 Tennessee is an “equitable distribution” state, meaning that once all the marital property is classified and valued, the court must divide the property according to the factors listed in T.C.A. § 36-4-121(c). Equitable division does not mean that each asset or piece of property will be divided equally between the spouses. Sometimes, the court will divide the property according to the value of each item in an attempt to give each spouse equal value of the marital property.

Types of Alimony in Tennessee. In any divorce, legal separation or separate maintenance case in Tennessee, the court may require alimony to be paid by one spouse to the other depending on the nature of the case and the circumstances of the spouses. 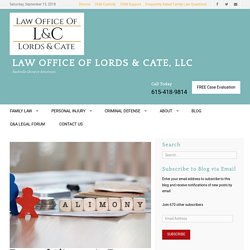 Every alimony case is fact driven and every case is different. There are four types of alimony in Tennessee. Rehabilitative Alimony: the purpose of this form of alimony is to rehabilitate a spouse’s earning capability, typically because the spouse has been out of the workforce. Alimony in Futuro: also known as Periodic Alimony, is payment of support on a long-term basis, until death, or until the remarriage of the recipient spouse. Things To Know About Getting Divorce in Tennesseee. Whether you are seeking a divorce or your spouse is, this can be an emotionally difficult time. 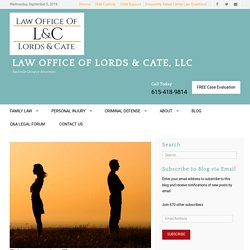 Knowing your options and rights throughout the process is vital to making the right decision. There are two types of divorce in Tennessee, each of which has their own requirements. Our Nashville divorce attorneys can help you understand the difference so you can decide which is best for you. When the spouses cannot reach an agreement on all the terms of a marital dissolution agreement or a permanent parenting plan, the divorce is known as a contested divorce.

The contested divorce process begins with the complaint being filed with the court. The most common ground for divorce is Inappropriate Marital Conduct, which includes a variety of conduct that renders the continuation of the marriage intolerable. The contested divorce process can be long, expensive and have the potential of going to trial. Mistakes to Avoid While Establishing Child Custody and Visitation. Whether you are seeking to establish custody or alter an existing parenting plan, everything you do can be used against you. 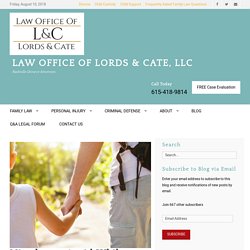 The following are some mistakes to avoid while establishing child custody and visitation. Missing child support payments The purpose of child support is pretty obvious, it is to provide financial support for the benefit of the child. The consequences of failing to pay child support range from losing visitation rights, having your license suspended, wages garnished, and even jail time (these are possible consequences for not paying timely as well). These punishments seem harsh, but the courts view the failure to pay as having a negative effect on the child/children. Posting recklessly on social media Almost everyone is on social media these days. Common Myths About Divorce in Tennessee with Lords And Cate. Modifying Child Support in Tennessee. Modifying A Permanent Parenting Plan With Your Family Law Attorney. All You Need To Know About Child Adoption in Tennessee. Inappropriate Marital Conduct is Grounds For Divorce In Tennessee.

Nashville Defense Attorneys For Consent Law Violation. Denying the breathalyzer or blood test for alcohol check could lead to an implied consent violation. Call Lords And Cate on (615)418-9814 for Representation. Refusing to take the breathalyzer or give blood is called an implied consent violation. This violation does not carry a criminal penalty. If, however, you are found to have violated the statute, you will lose your license for one year for the first violation. DUI Offenses and Law Offices of Lords and Cate.