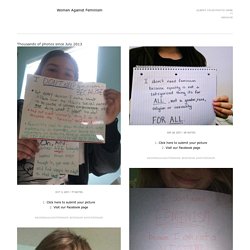 Click here to submit your picture2. Visit our Facebook page #womenagainstfeminism #feminism #antifeminism Sep 28, 2017 / 48 notes Sep 27, 2017 / 43 notes. Why I Need Feminism - Vanessas Writing Portfolio. This is my story of what it was like to grow up as a girl, and my testament to why we need feminism. 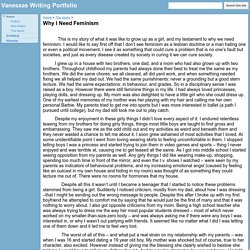 I would like to say first off that I don’t see feminism as a lesbian doctrine or a man hating one or even a political movement. I see it as something that could cure a problem that is no one’s fault but societies, and just as every disease created by society in curing it we can cure society. I grew up in a house with two brothers, one dad, and a mom who had also grown up with two brothers. Throughout childhood my parents had always done their best to treat me the same as my brothers. We did the same chores: we all cleaned, all did yard work, and when something needed fixing we all helped my dad out. RE: Feminism (REQUEST) Lost Daughters: I was the baby in the box. Recently, photographs of the Korean baby box flooded my Facebook newsfeed. 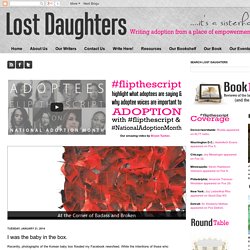 While the intentions of those who posted were innocently well-meant, I felt wounded by them. The story seems on the surface a human interest story of love and compassion with the Christian twist. There’s that warm, fuzzy feeling of babies, love, acceptance. But wait … Here’s what you should know. Single women in Korea are pariahs. “The only government assistance currently available to unwed mothers is a child-rearing subsidy of 70,000 won (US$66) a month. Add to the poverty, the shame of being an unwed mother. “The fact that I had spent the last 2 years building a good reputation among my employer, students, and Korean friends and I would have to start making up a lot of lies to keep it, because telling them I was an unmarried pregnant girl would not be acceptable at all. 1) realize that maybe they have the right to raise their child or Many have been deceived and have funded the efforts of these boxes. 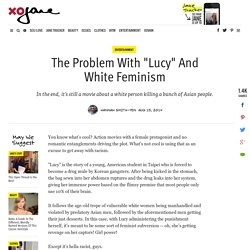 Action movies with a female protagonist and no romantic entanglements driving the plot. What’s not cool is using that as an excuse to get away with racism. "Lucy" is the story of a young, American student in Taipei who is forced to become a drug mule by Korean gangsters. After being kicked in the stomach, the bag sewn into her abdomen ruptures and the drug leaks into her system, giving her immense power based on the flimsy premise that most people only use 10% of their brain. It follows the age-old trope of vulnerable white women being manhandled and violated by predatory Asian men, followed by the aforementioned men getting their just desserts. Except it’s hella racist, guys. "Lucy" begins in Taiwan and all the villains are Asian so the question has to be posed: Why is Lucy white? Take the escape scene, where she breaks free from her captors and finds a taxi to take her to the hospital.

English is not a widely spoken language in Taiwan, where this scene is set. Feminism. Black feminism. Anti-feminism. ETUDE DE GENRE. An interview with Jim Sterling about sexism in game culture. Jim Sterling, a staff writer for Destructoid and weekly video blogger for The Escapist, is a pretty big name in the video game blogosphere, as someone who has been doing it for quite a while and one of the few professional video game bloggers out there. 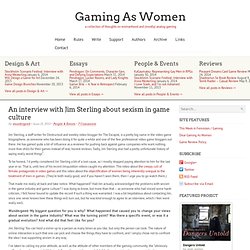 He has gained quite a bit of influence as a reviewer for pushing back against game companies who want nothing more than shills for their games instead of real, honest reviews. Sadly, Jim Sterling also had a pretty unfortunate history of saying really sexist things. To be honest, I’d pretty considered Jim Sterling a bit of a lost cause, so I mostly stopped paying attention to him for the last year or so. That is, until two of his recent Jimquisition videos caught my attention: This video about the creepy cull of female protagonists in video games and this video about the objectification of women being inherently unequal to the treatment of men in games.

That made me really sit back and take notice. Gender. Feminism 101: Read Books, Become a Better Womyn. In response to our first in a series of three Autostraddle Roundtables about feminism, several of you requested a “reading list” to introduce you to some of the basic literature grounding the feminist movement. 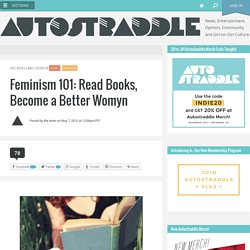 Simple enough, right? Well, we knocked our heads together and came up with about 5 billion books, which is probs the difference between bloggers and people with PhDs? : they know how to write concise, clear, focused syllabi? So here’s your list ladies. Get in your hammock, lie on your porch, hide in your emo cave and READ SOME MOTHERFUCKING BOOKS, IDIOTS! This list focuses primarily on the American feminist movement. Feminism. Feminism Articles. Gender & feminism. Álbum de mulleres. Coming Out Guide, Support Group Gay Bisexual Women, Free Ecards.