National Anthems of the World from NationalAnthems.me. House of Orange-Nassau. Several members of the house served during this war and after as governor or stadtholder (Dutch stadhouder) during the Dutch Republic. However, in 1815, after a long period as a republic, the Netherlands became a monarchy under the House of Orange-Nassau. The House of Nassau[edit] The Castle of Nassau was founded around 1100 by Count Dudo-Henry of Laurenburg (German: Dudo-Heinrich von Laurenburg), the founder of the House of Nassau. In 1120, Dudo-Henry's sons and successors, Counts Robert I (German: Ruprecht; also translated Rupert) and Arnold I of Laurenburg, established themselves at Nassau Castle with its tower. 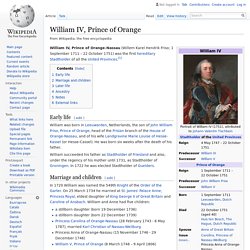 He was born six weeks after the death of his father. Marriage and children[edit] Prince of Orange and Nassau. Historical Dutch official. Monarchy of the Netherlands. Meet the Dutch Royal family: 9 things to know before tour, 1st U.S. visit. He was the long-awaited baby boy born to a throne that had seen only girls for more than a century. 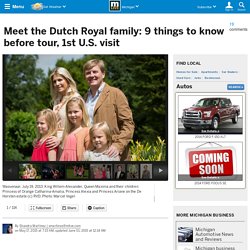 She was a blonde investment banker from Argentina who caught his eye. Together, Dutch King Willem-Alexander and Queen Maxima have become a royal power couple with three adorable girls, traveling the world on behalf of the Netherlands. The queen has shown off her flair for fashion, drawing many to make the comparison to the late Princess Diana. Like that royal icon, Queen Maxima is also known for her charity work. NL Planet - The Dutch Royal Family. Home »» NL Guides »» The Dutch Royal Family ... 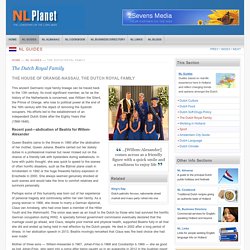 [Willem-Alexander] comes across as a friendly figure with a quick smile and a readiness to enjoy life This ancient Germanic royal family lineage can be traced back to the 13th century. Meet the Dutch Royal family: 9 things to know before tour, 1st U.S. visit. Dutch abdication: Ten things you never knew about the royal family of the Netherlands. 2) The family of new monarch Willem-Alexander were immortalised by Holland's National Spore, Mould and Fungus Institute in April, after their names were used to classify new strains of a fungal nail disease. 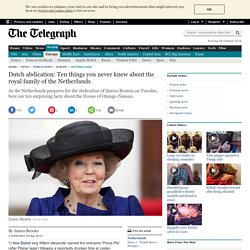 Willem-Alexander's wife, Princess Máxima, and their daughters Amalia, Alexia and Ariane had their names given to new strains of mould, known to cause bright orange spores on the feet, after they were discovered in a royal Dutch shower cubicle. 3) Unlike in the UK, where Queen Elizabeth has religious titles and will hold her role until she is no longer able, the Dutch monarch is more or less a government job – only hereditary. As head of state, the Dutch king or queen falls under the influence of the prime minister and there is nothing to stop them abdicating as Beatrix, her mother Queen Juliana, and her mother Queen Wilhelmina did before. 6) Whilst new monarchs in the UK are crowned, Dutch kings and queens are inaugurated to their role as head of the royal family.

Order of Orange-Nassau. The Order of Orange-Nassau (Dutch: Orde van Oranje-Nassau, Dutch pronunciation: [oːˈrɑnjə ˈnɑsʌu̯]) is a civil and military Dutch order of chivalry founded on 4 April 1892 by the Queen regent Emma, acting on behalf of her under-age daughter Queen Wilhelmina. 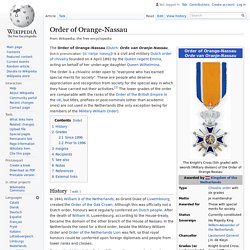 The Order is a chivalric order open to "everyone who has earned special merits for society". These are people who deserve appreciation and recognition from society for the special way in which they have carried out their activities.[1] The lower grades of the order are comparable with the ranks of the Order of the British Empire in the UK, but titles, prefixes or post-nominals (other than academic ones) are not used in the Netherlands (the only exception being for members of the Military William Order). 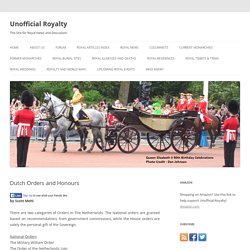