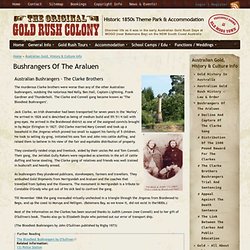 The Clarke and Connell gang became known as "The Bloodiest Bushrangers". Jack Clarke, an Irish shoemaker had been transported for seven years in the "Morley". He arrived in 1826 and is descirbed as being of medium build and 5ft 51/4 tall with grey eyes. He arrived in the Braidwood district as one of the assigned convicts brought in by Major Elrington in 1827.

Old Clarke married Mary Connell and took up a leasehold in the Jingeras which proved too small to support his family of 5 children. They constantly raided crops and livestock, aided by their uncles Pat and Tom Connell. As bushrangers they plundered publicans, storekeepers, farmers and travellers. The Clarke Brothers : About New South Wales. © the State Library of New South Wales John and Thomas Clarke were born near Braidwood to their emancipated Irish convict father and Irish mother. 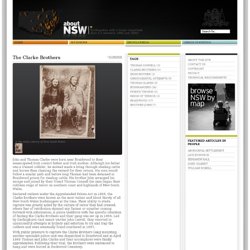 Although his father was a trained cobbler, he instead made a living through stealing cattle and horses then claiming the reward for their return. His sons would follow a similar path and before long Thomas had been detained in Braidwood prison for stealing cattle. Clarke brothers. Thomas (1840? 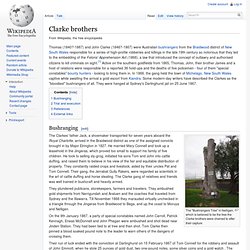 -1867) and John Clarke (1846? -1867) were Australian bushrangers from the Braidwood district of New South Wales responsible for a series of high-profile robberies and killings in the late 19th century so notorious that they led to the embedding of the Felons' Apprehension Act (1866), a law that introduced the concept of outlawry and authorised citizens to kill criminals on sight.[1] Active on the southern goldfields from 1865, Thomas, John, their brother James and a host of relations were responsible for a reported 36 hold-ups and the deaths of five policemen - four of them "special constables" bounty hunters - looking to bring them in.

In 1866, the gang held the town of Michelago, New South Wales captive while awaiting the arrival a gold escort from Kiandra. Some modern-day writers have described the Clarkes as the "bloodiest" bushrangers of all. They were hanged at Sydney's Darlinghurst jail on 25 June 1867. Bushranging[edit] Trial and execution[edit] References[edit] 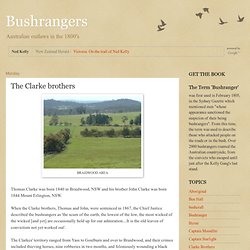 When the Clarke brothers, Thomas and John, were sentenced in 1867, the Chief Justice described the bushrangers as 'the scum of the earth, the lowest of the low, the most wicked of the wicked [and yet] are occasionally held up for our admiration....It is the old leaven of convictism not yet worked out'. The Clarkes' territory ranged from Yass to Goulburn and over to Braidwood, and their crimes included thieving horses, nine robberies in two months, and feloniously wounding a black tracker. In 1866, under the Felon's Apprehension Act 1865 (NSW) the Clarke brothers were declared outlaws for reasons of 'robbery, violence and murder'. 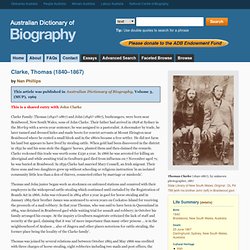 -1867) and John (1846? -1867), bushrangers, were born near Braidwood, New South Wales, sons of John Clarke. Their father had arrived in 1828 at Sydney in the Morley with a seven-year sentence; he was assigned to a pastoralist. A shoemaker by trade, he later tanned and dressed hides and made boots for convict servants at Mount Elrington near Braidwood where he rented a small block and in the 1860s became a free settler. He did not farm his land but appears to have lived by stealing cattle. Thomas and John junior began work as stockmen on unfenced stations and connived with their employers in the widespread cattle-stealing which continued until curtailed by the Registration of Brands Act in 1866. In March Parkes sent a strong force of experienced police to Braidwood. At their trial in Sydney on 28 May special precautions were taken to prevent any display of public sympathy.