I See Music Because I Have Synesthesia, So I Decided To Paint What I Hear. As a synesthete, the music I hear is translated into a flow of texture and colors. 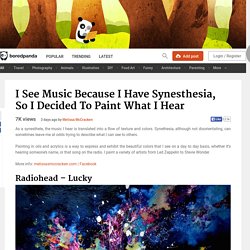 Synethesia, although not disorientating, can sometimes leave me at odds trying to describe what I can see to others. Painting in oils and acrylics is a way to express and exhibit the beautiful colors that I see on a day to day basis, whether it’s hearing someone’s name, or that song on the radio. I paint a variety of artists from Led Zeppelin to Stevie Wonder. More info: melissasmccracken.com | Facebook Radiohead – Lucky (Listen on Youtube) David Bowie – Life On Mars? (Listen on Youtube) John Lenon – Imagine (Listen on Youtube) Prince – Joy In Repetition (Listen on Youtube) Jimi Hendrix – Little Wing (Listen on Youtube)

Here’s How The Euro Would Look If It Was Designed By This Hungarian Student. The euro is a controversial currency, but one thing that we can agree upon is that this currency might look a lot better if Hungarian graphic design student Barbara Bernat had anything to say about it. 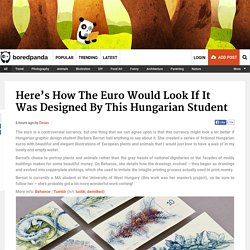 She created a series of fictional Hungarian euros with beautiful and elegant illustrations of European plants and animals that I would just love to have a wad of in my lonely and empty wallet. Bernat’s choice to portray plants and animals rather than the gray heads of national dignitaries or the facades of moldy buildings makes for some beautiful money. On Behance, she details how the drawings evolved – they began as drawings and evolved into copperplate etchings, which she used to imitate the intaglio printing process actually used to print money.

Bernat is currently a MA student at the University of West Hungary (this work was her master’s project), so be sure to follow her – she’s probably got a lot more wonderful work coming! Amazing Glass Sculpture Reveals Four Hidden Animals When Rotated. New Incredibly Detailed Pen Doodles By Kerby Rosanes. Kerby Rosanes, the doodle master from the Phillipines, is back with new amazingly detailed drawings. 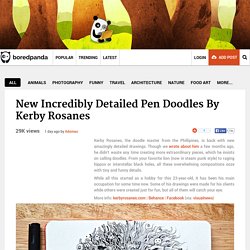 Though we wrote about him a few months ago, he didn‘t waste any time creating more extraordinary pieces, which he insists on calling doodles. From your favorite lion (now in steam punk style) to raging hippos or interstellar black holes, all these overwhelming compositions ooze with tiny and funny details. While all this started as a hobby for this 23-year-old, it has been his main occupation for some time now. Some of his drawings were made for his clients while others were created just for fun, but all of them will catch your eye. 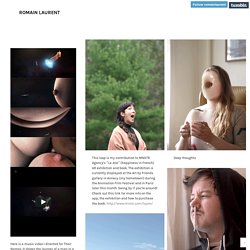 This past week has been as intense as it gets for a lot of people in Paris. I happened to be visiting for a couple week. We were all affected one way or another. Horrible stories after horribles stories were shared, friends lost loved ones, were wounded, attacked while doing nothing more than just enjoying life. Shock, disgust, sadness came first. These 30 Creative Ambient Ads Know How To Grab Your Attention. Companies trying to sell you a product will do anything to cram their ads down your throat, but it’s always nice when they show a bit of creativity and taste when trying to get your attention. 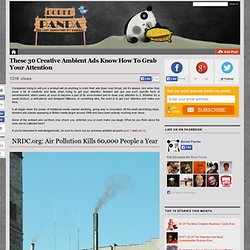 Ambient ads are one such specific form of advertisement, which seeks at once to become a part of its environment and to draw your attention to it. Whether it’s a spoof product, a well-placed and designed billboard, or something else, the point is to get your attention and make you think. It all began when the power of traditional media started declining, giving way to innovative off-the-shelf advertising ideas. Ambient ads started appearing in British media jargon around 1999 and have been actively evolving ever since. Some of the ambient ads out there may shock you, entertain you or even make you laugh. If you’re interested in well-designed ads, be sure to check out our previous ambient ad posts (part 1 and part 2).

NRDC.org: Air Pollution Kills 60,000 People a Year Advertising Agency: unknown. 20 Rare Photographs From History You Might Not Have Seen. Even if you consider yourself a history buff, when you see these rare photos from history you may realize you know less than you think. 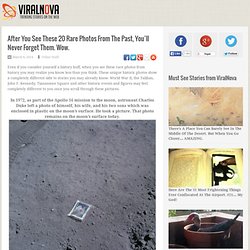 These unique historic photos show a completely different side to stories you may already know. World War II, the Taliban, John F. Kennedy, Tiananmen Square and other historic events and figures may feel completely different to you once you scroll through these pictures. In 1972, as part of the Apollo 16 mission to the moon, astronaut Charles Duke left a photo of himself, his wife, and his two sons which was enclosed in plastic on the moon’s surface. He took a picture. Imgur This is The Statue of Liberty under construction in Paris in 1884.

Drug kingpin Pablo Escobar and his son stand in front of The White House in the early 1980s. Fake signs in London underground. The 50 pictures in perfect timing.