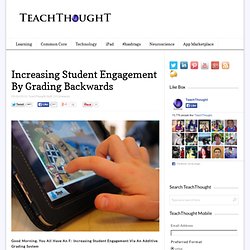 You All Have An F: Increasing Student Engagement Via An Additive Grading System by Rob Steller, classxp.org In a way, the current education system is already set up like a game–just not a very well designed one. Students earn points (grades), gain levels (grades), and in a way, have leaderboards. There are class valedictorians and students are essentially ranked based on their grades when colleges are deciding who to accept. This system is subtractive, i.e. as a student achieves anything less than perfect, they are punished with a decrease in score. This counterintuitive, decreasing point system is the reverse of the one that most games employ, which is a bottom-up point system. For the most part, games do not allow the player to progress to the next objective until they have mastered the previous task. This also increases the player’s feeling of success when they accomplish each task.

How ClassXP Might Help. Teachers reveal what they REALLY think about Co. A Superintendent's Perspective on Common Core. Common Core tests are in classrooms – and. Teachers say critics of Common Core State Stand. Superintendent: Investigator says teachers' Common Core harassme. Superintendent of Sikeston schools Tom Williams said on May 14 a third-party investigator found the claims some Sikeston teachers made that they were harassed by the school district because of their common core beliefs were deemed unfounded. 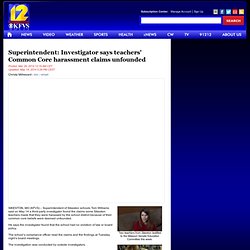 He says the investigator found that the school had no violation of law or board policy. The school’s compliance officer read the claims and the findings at Tuesday night’s board meetings. The investigation was conducted by outside investigators. Teachers had made several allegations, including claims that they were denied personal says because they were going to speak to the state legislature against common core and also that they were directed not to speak negatively about common core. All of those allegations were deemed unfounded. Teachers in the Sikeston school district spoke out against a new set of teaching practices, known as Common Core. She said it takes the fun out of learning, and is dull and boring for the kids. Montana View: Don’t fear Common Core. Alarmed that United States has fallen behind other nations in student achievement, some American business leaders convinced state leaders to take action. 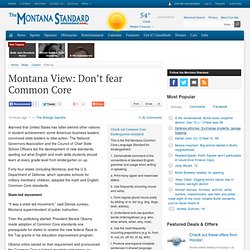 The National Governors Association and the Council of Chief State School Officers led the development of new standards, spelling out what English and math skills students should learn at every grade level from kindergarten on up. Forty-four states (including Montana) and the U.S. Department of Defense, which operates schools for military members’ children, adopted the math and English Common Core standards. State-led movement “It was a state-led movement,” said Denise Juneau, Montana superintendent of public instruction. Then the politicking started. Obama critics seized on that requirement and pronounced the Common Core a federal mandate and worse, an Obama mandate.

Instead, let’s look at the facts. Teacher Testimony: Why I Support the Common Cor. Parents Lean in Favor of Common Core, but Many Unaware. This article is part of a weeklong series analyzing how education leaders, students, and teachers evaluate education in America. 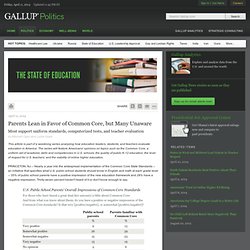 The series will feature Americans' opinions on topics such as the Common Core, a uniform set of academic skills and competencies in U.S. schools; the quality of public K-12 education; the level of respect for U.S. teachers; and the viability of online higher education. PRINCETON, NJ -- Nearly a year into the widespread implementation of the Common Core State Standards -- an initiative that specifies what U.S. public school students should know in English and math at each grade level -- 35% of public school parents have a positive impression of the new education framework and 28% have a negative impression. Thirty-seven percent haven't heard of it or don't know enough to say.

Among those who say they have heard at least a little about the Common Core standards, views tilt positive, by 52% to 42%. However, relatively few parents feel strongly about Common Core. Education Week. Sandra Stotsky on Common Core Assessments. Massachusetts is telling their parents that they can not opt their students out from the PARCC assessments that are being field tested this year. 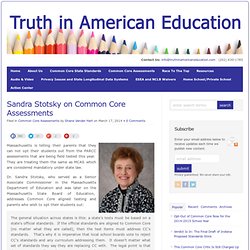 They are treating them the same as MCAS which are considered mandatory under state law. Dr. Sandra Stotsky, who served as a Senior Associate Commissioner in the Massachusetts Department of Education and was later on the Massachusetts State Board of Education, addresses Common Core aligned testing and parents who wish to opt their students out: The general situation across states is this: a state’s tests must be based on a state’s official standards. If the official standards are aligned to Common Core (no matter what they are called), then the test items must address CC’s standards. Tags: common core assessments, PARCC, Sandra Stotsky, Smarter Balanced Assessment Consortium About the Author (Author Profile) Shane Vander Hart is the Editor-in-Chief of Caffeinated Thoughts, a popular Christian conservative blog in Iowa.