London 3D Printing specialises in SLS Nylon 3D printing and can deliver a wide variety of parts to almost any requirement. Using leading technology in the field, the company has worked in a number of different settings to aid several types of businesses in the development of engineered pieces. Whether it’s the development of single parts or large batches, London 3D Printing delivers a professional and reliable service for all their client’s 3D printing needs.

Everything You Need To Know About SLS 3D Printing. There are many different types of 3D printers and many processes, but at London 3D Printing we are specialists, among other things, in the use of SLS 3D printing. 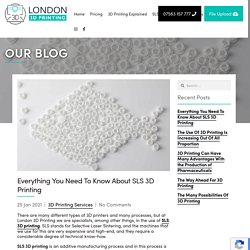 SLS stands for Selective Laser Sintering, and the machines that we use for this are very expensive and high-end, and they require a considerable degree of technical know-how. SLS 3D printing is an additive manufacturing process and in this process a laser selectively sinters the particles of a polymer powder, fusing them together and building up the object layer by layer. The powder that we use is a standard polyamide powder known as PA12 or Nylon 12 and costs approximately £45 – £50 per kilogram. The Use Of 3D Printing Is Increasing Out Of All Proportion. If you are looking for a company that can carry out 3D printing for you, no doubt you will Google “3D printing near me” or something similar. 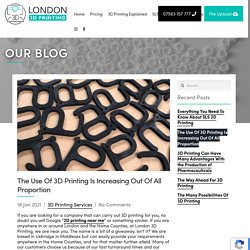 If you are anywhere in or around London and the Home Counties, at London 3D Printing, we are near you. The name is a bit of a giveaway, isn’t it? We are based in Uxbridge in Middlesex but can easily provide your requirements anywhere in the Home Counties, and for that matter further afield. Many of our customers choose us because of our fast turnaround times and our pricing promise – we are never beaten on price!

Turnaround times are important. 3D Printing Can Have Many Advantages With the Production of Pharmaceuticals. 3D printing in London – and not only in London, but across the world – has been coming on in leaps and bounds, and today is far beyond the manufacture of simple parts or prototypes out of plastic. 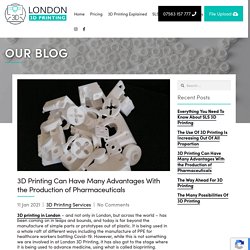 It is being used in a whole raft of different ways including the manufacture of PPE for healthcare workers battling Covid-19. However, while this is not something we are involved in at London 3D Printing, it has also got to the stage where it is being used to advance medicine, using what is called bioprinting. Bioprinting can now produce some biological tissues and has already been used to grow human ears on the backs of mice.

The ultimate aim is to be able to print complete human organs such as a heart or liver which can then be used for transplants without the need to wait for a human donor. Meanwhile, another use for bioprinting that is emerging is the production of pharmaceutical drugs tailored to meet the specific requirements of an individual patient. The Way Ahead For 3D Printing. 3D printing is about to take over many manufacturing processes in a very big way. 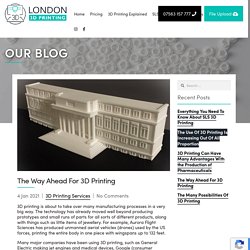 The technology has already moved well beyond producing prototypes and small runs of parts for all sorts of different products, along with things such as little items of jewellery. For example, Aurora Flight Sciences has produced unmanned aerial vehicles (drones) used by the US forces, printing the entire body in one piece with wingspans up to 132 feet. Many major companies have been using 3D printing, such as General Electric making jet engines and medical devices, Google (consumer electronics), Invisalign (teeth braces), and Lockheed Martin (aerospace and defence).

The Many Possibilities Of 3D Printing. If you are an architect, you not only have to create a design for whatever it is that your client wants, but you also need to create a model of it so that he can see what the finished building or whatever the item is will look like. 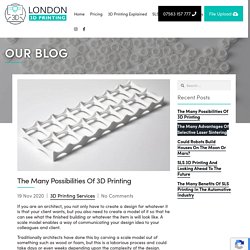 A scale model enables a way of communicating your design idea to your colleagues and client. Traditionally architects have done this by carving a scale model out of something such as wood or foam, but this is a laborious process and could take days or even weeks depending upon the complexity of the design. Imagine, for example, trying to produce a scale model of the Cathedral of Notre Dame. However, today we have the benefit of 3D printing of architecture, and more and more architects are coming on board, as it can produce an accurate scale model in far less time than it does to carve one by hand.

The Many Advantages Of Selective Laser Sintering. At London 3D Printing, we are specialists in selective laser sintering which can produce products to a very high standard of finish compared to some other 3D printing processes. 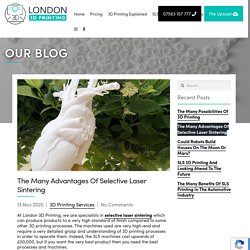 The machines used are very high-end and require a very detailed grasp and understanding of 3D printing processes in order to operate them. Indeed, the SLS machines cost upwards of £50,000, but if you want the very best product then you need the best processes and machines. 3D printing can use a number of different materials, but many processes use one of the thermoplastics known as ABS. A thermoplastic is any plastic which can be melted when subjected to heat and returns to a solid state when it is cooled down.

ABS – Acrylonitrile Butadiene Styrene – is used to manufacture many different products such as the outside of your cell phone, computer keyboards and mice, and is the same material that is used to make the Lego bricks. Could Robots Build Houses On The Moon Or Mars? Architects are by nature creative. 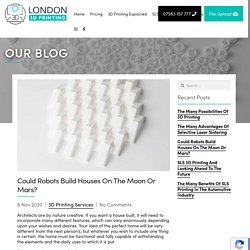 If you want a house built, it will need to incorporate many different features, which can vary enormously depending upon your wishes and desires. Your idea of the perfect home will be very different from the next person’s, but whatever you wish to include one thing is certain: the home must be functional and fully capable of withstanding the elements and the daily uses to which it is put. This means that you need to instruct an architect to produce the design and incorporate all of the elements that you want to include. First, he will produce a blueprint, but that alone is not sufficient for you to be able to “see” what the house is going to look like when it is finally built, so from the blueprint the architect will produce a model which will give you a much better idea of how everything will look and perform. SLS 3D Printing And Looking Ahead To The Future. The process of sintering has been around for thousands of years and some of the first ever products produced by sintering were bricks which were heated in open fires in order to increase their strength. 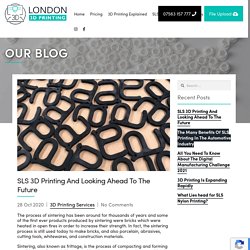 In fact, the sintering process is still used today to make bricks, and also porcelain, abrasives, cutting tools, whitewares, and construction materials. Sintering, also known as frittage, is the process of compacting and forming a solid mass of material by using either heat or pressure without melting it to the point where it becomes liquid. An example of pressure sintering is when snow is compacted into a glacier.

Another example is when the ice cubes in your glass of gin and tonic stick together, which is caused by the difference in temperature between the ice and your G&T. An example of sintering in the early 19th century was when William D Coolidge sintered tungsten powder in order to produce a lamp filament for Thomas Edison. The Many Benefits Of SLS Printing In The Automotive Industry. All You Need To Know About The Digital Manufacturing Challenge 2021. As one of the foremost 3D printing companies in London, at London 3D Printing we are looking forward with anticipation to the Digital Manufacturing Challenge 2021 which is being organised by the organisation SME, with headquarters in Southfield , Michigan, in the US. 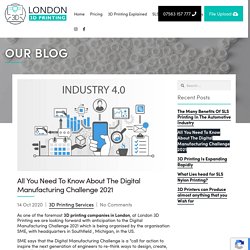 SME says that the Digital Manufacturing Challenge is a “call for action to inspire the next generation of engineers to re-think ways to design, create, and utilize infrastructure-level systems that deploy engineering design and manufacturing solutions to strengthen infrastructure in the response, mitigation and/or prevention of such disruptive and devastating events (as Covid-19) and envision an optimistic view of healthy, robust, sustainable, smart, agile, peaceful communities”. 3D Printing Is Expanding Rapidly. At London 3D Printing Services, we have a wide range of different 3D printing machines which we use for a number of different processes including our specialism which is SLS printing, or Selective Laser Sintering. 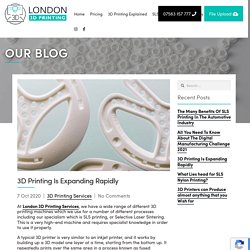 This is a very high-end machine and requires specialist knowledge in order to use it properly. A typical 3D printer is very similar to an inkjet printer, and it works by building up a 3D model one layer at a time, starting from the bottom up. It repeatedly prints over the same area in a process known as fused deposition modelling (FDM). However, it doesn’t use ink because that would never build up into anything very much, so instead uses some sort of thermoplastic which is molten and is extruded through a very tiny nozzle which moves around into the correct positions while being controlled by a computer. The printer will print one layer and then wait for it to dry or set before printing the next layer. In practice, you don’t need to use plastic to print. What Lies head for SLS Nylon Printing? 3D printing was invented back in the mid 1980’s and today it has expanded massively. You can get all sorts of different products made using a 3D printer and there are a lot of different types of 3D printers, from simple machines that you can buy for £150 or less and play around with at home up to far more expensive machines such as the SLS printers we use at London 3D Printing which cost upwards of £50,000.

SLS stands for Selective Laser Sintering and such a machine has advantages over and above many of the standard 3D printers (although we also use those at London 3D Printing) in that it can produce parts of incredible fascinating geometric shapes with a much finer finish than other sorts of printer. For those new to the workings of 3D printers, they can produce an object in three dimensions, as you might guess, which is often made out of one of the many thermoplastics available, and is frequently ABS.

So what is the future for SLS nylon printing? 3D Printers can Produce almost anything that you Wish for. What Is Selective Laser Sintering? The Steps we Need to Follow to Produce your 3D Prototype. 3D printing was invented back in the 1980’s by Charles “Chuck” Hull, and in 1986 he founded 3D Systems in order to commercialise his technology. 3D printing has come on in leaps and bounds since those days, and you can now get everything from a small home 3D printer for less than £150 up to the top-end SLS nylon printing machines that we use at London 3D Printing, and which can cost upwards of £50,000.

SLS stands for Selective Laser Sintering. What is SLS 3D Printing and What Can It Do? How Has COVID-19 Impacted the 3D Printing Sector? In addition to its impact on public health, the COVID-19 pandemic has caused major economic and supply chain disruptions throughout the world. It is also expected to transform consumer demand in the long term, with a greater demand for automation and digital services coming to the forefront. As we’ve witnessed recently, 3D printing technology has played an intriguing role in the battle against the spread of the virus. Through its inherent speed and innovation, 3D printing has been used in multiple areas to create vital parts and pieces for the healthcare sector, as well as help to alleviate the impact of damaged supply chains.

The need for fast action is still crucial today, and there’s no doubt that 3D printing, when used effectively, can have a positive impact in the fight against COVID-19.