Internal Workings of the Soviet Union - Revelations from the Russian Archives. Having come to power in October 1917 by means of a coup d'état, Vladimir Lenin and the Bolsheviks spent the next few years struggling to maintain their rule against widespread popular opposition. 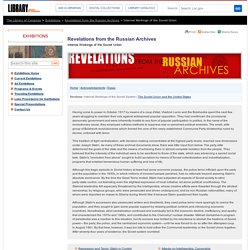 They had overthrown the provisional democratic government and were inherently hostile to any form of popular participation in politics. In the name of the revolutionary cause, they employed ruthless methods to suppress real or perceived political enemies. The small, elite group of Bolshevik revolutionaries which formed the core of the newly established Communist Party dictatorship ruled by decree, enforced with terror. This tradition of tight centralization, with decision-making concentrated at the highest party levels, reached new dimensions under Joseph Stalin.

As many of these archival documents show, there was little input from below. Repression and Terror: Stalin in Control Stalin and colleagues, 1929 Bookmark this item: //www.loc.gov/exhibits/archives/intn.html#obj1 Back to Top Secret Police. Soviet censorship: How did the USSR control the public? Russian authorities are currently discussing blocking the Telegram messaging app, as it can be used by terrorists. 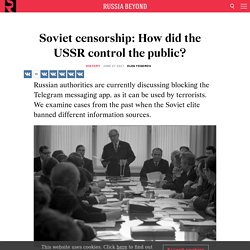 We examine cases from the past when the Soviet elite banned different information sources. State Committee for Television and Radio Broadcasting of the USSR Chairman Sergey Lapin during a TV management meeting, 1973 / Lev Nosov/RIA Novosti The Bolsheviks seized power in Russia in 1917 while championing freedom, yet one of their first decisions was to limit free speech through harsh censorship. Okhrana. Secret police force of the Russian Empire The Department for Protecting the Public Security and Order (Russian: Отделение по Охранению Общественной Безопасности и Порядка), usually called "guard department" (Russian: Охранное отделение) and commonly abbreviated in modern sources as Okhrana (Russian: Охрана, IPA: [ɐˈxranə] ( Overview[edit] Formed to combat political terrorism and left-wing revolutionary activity,[2] the Okhrana operated offices throughout the Russian Empire and satellite agencies in a number of foreign nations. 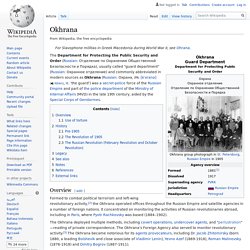 It concentrated on monitoring the activities of Russian revolutionaries abroad, including in Paris, where Pyotr Rachkovsky was based (1884–1902). The Okhrana deployed multiple methods, including covert operations, undercover agents, and "perlustration"—reading of private correspondence. The Okhrana tried to compromise the labour movement by setting up police-run trade unions, a practice known as zubatovshchina.

Use of torture[edit] History[edit] Pre-1905[edit] The Cheka. The Cheka (sometimes called VeCheka) was the much-feared Bolshevik security agency, formed to identify and eradicate counter-revolutionary activity. 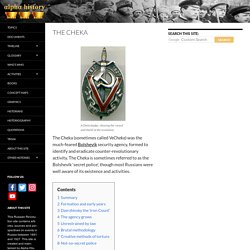 The Cheka is sometimes referred to as the Bolshevik ‘secret police’, though most Russians were well aware of its existence and activities. Summary The Cheka was formed in the wake of the October 1917 revolution, as a small agency to investigate and deal with threats to the new regime. It was to be the “sword and shield of the revolution”, defending the new regime against its enemies within. Its first leader was Felix Dzerzhinsky. Stalin's Security Force - Crime Museum. After the bloody Bolshevik Revolution in 1917, the leaders of the new Soviet Union protected their authority through the use of secret police. 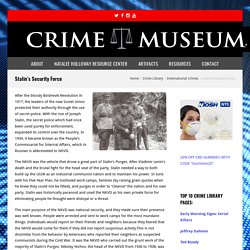 With the rise of Joseph Stalin, the secret police which had once been used purely for enforcement, expanded its control over the country. In 1934, it became known as the People’s Commissariat for Internal Affairs, which in Russian is abbreviated to NKVD. Censorship in the Soviet Union. Censorship in the Soviet Union was pervasive and strictly enforced. 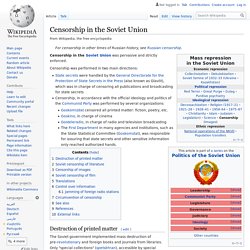 Censorship was performed in two main directions: ALLRUSSIAS - The Working Classes. Not surprisingly, the Russian workers began to organize to better their lot. 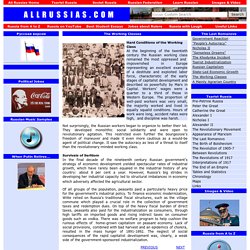 They developed monolithic social solidarity and were open to revolutionary agitation. This restricted even further the bourgeoisie’s freedom of maneuver and made it even more cautious as a would-be agent of political change. It saw the autocracy as less of a threat to itself than the revolutionary-minded working class. Of all groups of the population, peasants paid a particularly heavy price for the government’s industrial policy. To finance economic modernization, Witte relied on Russia’s traditional fiscal structures, such as the village commune which played a crucial role in the collection of government taxes and redemption dues. Alexander III, Repression, Pogroms and Revolutionary Youths. Macrohistory.com (RUSSIA, 1856-1900 – continued) home | 18-19th centuries index RUSSIA, 1856-1900 (5 of 6) 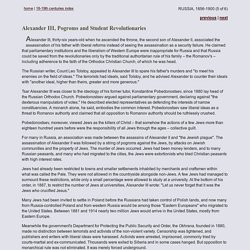 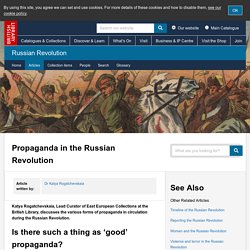 Is there such a thing as ‘good’ propaganda? Over the 20th century, the word 'propaganda' acquired predominantly negative connotations and to many, it is associated with totalitarian regimes. B) Alexander II (1855 - 1881) - IB history - Russia. Introduction Alexander II came to the throne in March 1855 at the age of 36, having been well prepared and trained to take over from his father, Nicholas I. Historian Lionel Kochan described him as "the best prepared heir the Russian throne ever had". On his deathbed Nicholas famously told Alexander to ‘hold on to everything!’ And Alexander was committed to retaining the autocratic powers of the tsardom.However, Alexander was less of a disciplinarian than his father and was more open to the arguments of others around him.

Deeply influenced by defeat in Crimean war and by liberal ministers, Alexander II undertook extensive reforms of Russian society and government. The Duma in Russian History. The Duma ("Assembly" in Russian) was an elected semi-representative body in Russia from 1906 to 1917. 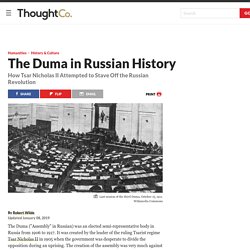 It was created by the leader of the ruling Tsarist regime Tsar Nicholas II in 1905 when the government was desperate to divide the opposition during an uprising. The creation of the assembly was very much against his will, but he had promised to create an elected, national, legislative assembly. After the announcement, hopes were high that the Duma would bring democracy, but it was soon revealed that the Duma would have two chambers, only one of which was elected by the Russian people. The Tsar appointed the other, and that house held a veto over any actions of the other. Also, the Tsar retained ‘Supreme Autocratic Power.’ There were four Dumas during the institution’s lifetime: 1906, 1907, 1907–12 and 1912–17; each had several hundred members made up of a mix of peasants and ruling classes, professional men and workers alike.

A) Russian context and the nature of tsardom (c. 1850) - IB history - Russia. Geography, climate and land.