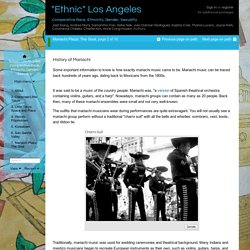 Mariachi music can be traced back hundreds of years ago, dating back to Mexicans from the 1800s. It was said to be a music of the country people. Mariachi was, "a version of Spanish theatrical orchestra containing violins, guitars, and a harp". Nowadays, mariachi groups can contain as many as 20 people. The outfits that mariachi musicians wear during performances are quite extravagant. Traditionally, mariachi music was used for wedding ceremonies and theatrical background. Here is a photo showing a few of the instruments mariachi musicians use. Mariachi Los Camperos Popurri. Música Hecha en México: Mariachi Vargas de Tecalitlan (21 Nov 15) Mariachi Los Camperos- Popurri. Mariachi. This article is about the musical genre. 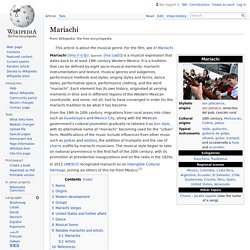 For the film, see El Mariachi. Mariachi (/mɑːriˈɑːtʃi/; Spanish: [maˈɾjatʃi]) is a musical expression that dates back to at least 19th century Western Mexico. It is a tradition that can be defined by eight socio-musical elements: mariachi instrumentation and texture, musical genres and subgenres, performance methods and styles, singing styles and forms, dance styles, performative space, performance clothing, and the word "mariachi". Each element has its own history, originated at varying moments in time and in different regions of the Western Mexican countryside, and some, not all, had to have converged in order for the mariachi tradition to be what it has become. From the 19th to 20th century, migrations from rural areas into cities such as Guadalajara and Mexico City, along with the Mexican government's cultural promotion gradually re-labeled it as Son style, with its alternative name of “mariachi” becoming used for the “urban” form. Name[edit] Mariachitos : Texas Music History Online.

Traditional Mexican Music. Music is a very important part of Mexican culture and is always part of a celebration, whether big or small. 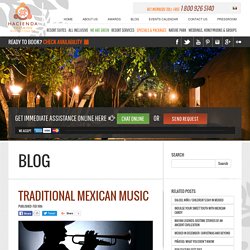 The music of Mexico sings of love, country, passion, history, legend and oppression, among other things. Here are three vibrant genres of traditional Mexican music explained. Mariachi Mariachi music is the first thing that comes to mind when one thinks of Mexican music. The term Mariachi is believed to be originated from the French term “mariage” which means marriage, as this music was often played at weddings. Ranchera Ranchera music draws on traditional folklore and its songs are usually about love, patriotism or nature. Norteño (Grupero) The accordion and the “bajo sexto” (a twelve string guitar) are Norteños most characteristic instruments. Unique Facts about Mexico: Mariachi. Mariachi Mariachi is a type of musical group, originally from Mexico, consisting of at least two violins, two trumpets, one Spanish guitar, one vihuela (a high-pitched, five-string guitar) and one guitarrón (a small-scaled acoustic bass), but sometimes featuring more than twenty musicians. 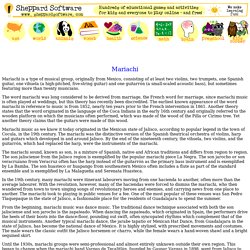 The word mariachi was long considered to be derived from marriage, the French word for marriage, since mariachi music is often played at weddings, but this theory has recently been discredited. The earliest known appearance of the word mariachi in reference to music is from 1852, nearly ten years prior to the French intervention in 1861.

Another theory states that the word originated in the language of the Coca Indians in the early 16th century and originally referred to the wooden platform on which the musicians often performed, which was made of the wood of the Pilla or Cirimo tree. Yet another theory claims that the guitars were made of this wood. Mariachi Alegre De Tucson - How Did Mariachi Come To Be? (History Pt 1) The Christian influence upon Mexico changed the music traditions. 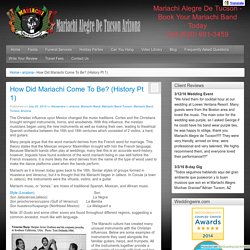 Cortes and the Christians brought stringed instruments, horns, and woodwinds. With this influence, the mestizo musicians began using the new instruments as well as making their own, leading to theatrical Spanish orchestra between the 16th and 18th centuries which consisted of 2 violins, a hard, and guitars. Many people argue that the word mariachi derives from the French word for marriage. This theory states that the Mexican emperor Maximillian brought with him the French language. The History of Mariachi and Its Influence in the United States. Mariachi Music in America - Daniel Sheehy - Oxford ... Mariachi Music in America is one of several case-study volumes that can be used along with Thinking Musically, the core book in the Global Music Series. 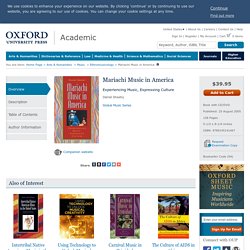 Thinking Musically incorporates music from many diverse cultures and establishes the framework for exploring the practice of music around the world. It sets the stage for an array of case-study volumes, each of which focuses on a single area of the world. Each case study uses the contemporary musical situation as a point of departure, covering historical information and traditions as they relate to the present. Visit www.oup.com/us/globalmusic for a list of case studies in the Global Music Series. The website also includes instructional materials to accompany each study.