Can You Dig It: FACT meets Minecraft composer C418. You might not think you know Daniel Rosenfeld (aka C418), but it’s more than likely you’ve heard his work. 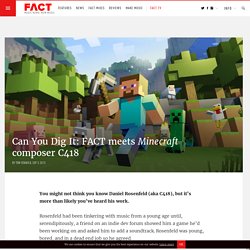 Rosenfeld had been tinkering with music from a young age until, serendipitously, a friend on an indie dev forum showed him a game he’d been working on and asked him to add a soundtrack. Rosenfeld was young, bored, and in a dead end job so he agreed. The soundtrack was a subtle ambient soundscape. The game was Minecraft. The rest is history. Ahead of the vinyl release of Minecraft Volume Alpha, FACT caught up with Daniel from his apartment in Berlin to chat about about Minecraft, terrible music and how to make a spider screech. “I never assumed making money and making music was the same thing.”Daniel Rosenfeld When did you first get into making music? That must have been when I was 15. So was there a point where you thought, “This is what I’d like to do all the time”? Yeah, definitely. And then Minecraft came along. I was kind of a cheap shit. Did Notch give you any guidelines? The Weblog Q&A: C418's Minecraft - Volume Alpha Soundtrack.

Daniel Rosenfeld, writing as C418, has served as the musician and sound designer on Mojang's Minecraft. 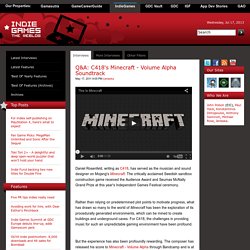 The critically acclaimed Swedish sandbox construction game received the Audience Award and Seumas McNally Grand Prize at this year's Independent Games Festival ceremony. Rather than relying on predetermined plot points to motivate progress, what has drawn so many to the world of Minecraft has been the exploration of its procedurally generated environments, which can be mined to create buildings and underground caves. For C418, the challenges in providing music for such an unpredictable gaming environment have been profound. But the experience has also been profoundly rewarding.

The composer has released his score to Minecraft - Volume Alpha through Bandcamp and is at work on the music that will appear both in future updates and later as part of the Volume Beta soundtrack. C418: Actually, yes. We met on irc, through TIGSource. Stats, Achievements, Snow and Rain Yeah, it's really weird. Interview: Minecraft’s Soundtrack Composer C418. How Daniel Rosenfeld wrote Minecraft's music. Daniel Rosenfeld is an endearingly chaotic public speaker. 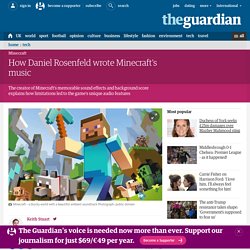 At the GameCity festival in Nottingham, he is supposed to be telling an audience about how he wrote the music and sound effects to the multimillion-selling building game Minecraft, but he keeps getting distracted. His sound files won’t load, then his computer crashes; his notes are on his mobile phone which seems to continually switch off. Yet the roomful of Minecraft fanatics hangs on his every word. The music is such an important part of this crazy gaming phenomenon. The wilting, minimalist tracks, slow-paced and slightly melancholy, recall the ambient works of Satie and Eno; they drift in the background as you build, sometimes just a few piano notes sounding as night draws in on your blocky world. It turns out the minimalism was kind of unavoidable.

There were other restrictions too. The result is an eerily silent soundscape, interrupted only by stark discreet noises. C418. I bet that you can count the people that don’t know what Minecraft is on a single hand. 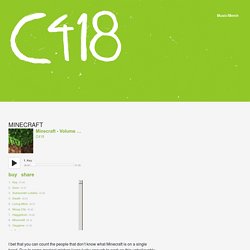 Due to some magical mishap I was lucky enough to work on this unbelievably popular indie game. I received quite some acknowledgement through Mojangs rising popularity and it also is responsible for my current state in life. I am not even a freelancer because I don’t work on many projects. I am much more of an independent musician. I work on the projects I love working on in the speed that I think is necessary to create unique soundscapes. Oh well, back to Minecraft. That’s pretty much the premise of this game. Almost everything you can hear when you play Minecraft is all my fault.

The sound design currently is a big mess. The biggest part I worked on and still do is the music. Think of entirely different genres of music in every single different game mode. The top of this article has an audio player of the soundtrack. Music.