Logistics Update Africa (LUA) is a bi monthly trade magazine that brings the most credible news, views and stories of and from Africa about the continent’s vibrant and evolving transport and logistics industries.

DP World to invest $442 for development of Berbera Port 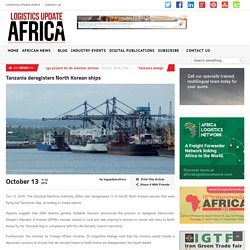 Reports suggest that ZMA director general Abdallah Hussein announced the process to deregister Democratic People’s Republic of Korean (DPRK) vessels started in June and was ongoing to ensure no vessel with links to North Korea fly the Tanzania flag in compliance with the UN Security Council sanctions. Furthermore, the minister for Foreign Affairs minister, Dr Augustine Mahiga said that the ministry would initiate a diplomatic process to ensure that all vessels linked to North Korea are deregistered, the report added. Etihad Cargo to fly shipments for Trinity Logistics from Colombo to Columbus. October 13, 2016: In a multi-million-dollar deal, Etihad Cargo will operate a weekly wide-body freighter service from Colombo in Sri Lanka to Columbus in Ohio and further to East Midlands Airport in the United Kingdom, on behalf of the New York-based global freight forwarder Trinity Logistics. 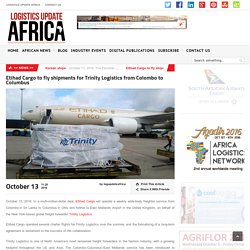 Etihad Cargo operated several charter flights for Trinity Logistics over the summer, and the formalising of a long-term agreement is testament to the success of the collaboration. Trinity Logistics is one of North America’s most renowned freight forwarders in the fashion industry, with a growing footprint throughout the US and Asia. The Colombo–Columbus–East Midlands service has been introduced to facilitate the movement of the latest high fashion from Sri Lanka for big box retailers in the US and support the company’s US export growth to Europe, the Middle East and Asia. Emirates SkyCargo launches freighter service to Oslo for seafood exports. Oct 12, 2016: Emirates SkyCargo (www.skycargo.com/) has launched a new weekly freighter service from Oslo to Dubai thus expanding its presence in Scandinavia. 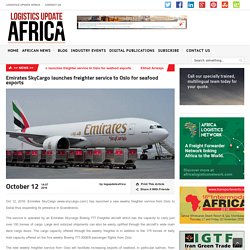 The service is operated by an Emirates Skycargo Boeing 777 Freighter aircraft which has the capacity to carry just over 100 tonnes of cargo. Large and outsized shipments can also be easily uplifted through the aircraft’s wide main deck cargo doors. The cargo capacity offered through the weekly freighter is in addition to the 175 tonnes of belly hold capacity offered on the five weekly Boeing 777-300ER passenger flights from Oslo. The new weekly freighter service from Oslo will facilitate increasing exports of seafood, in particular salmon, from Norway. The last six years have witnessed a doubling of Norwegian seafood exports because of increased demand from global customers for Norwegian salmon, trout, cod and crab. 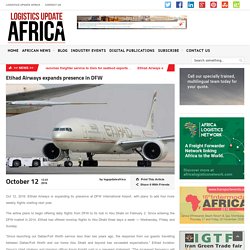 The airline plans to begin offering daily flights from DFW to its hub in Abu Dhabi on February 2. Since entering the DFW market in 2014, Etihad has offered nonstop flights to Abu Dhabi three days a week — Wednesday, Friday and Sunday. Canada's Solar Ship ties up with Manaf Freighters for African launch. Oct 12, 2016: Canadian company Solar Ship has launched a joint venture with an African air cargo delivery service that will see the first deployment of its promising new solar-powered hybrid aircraft. 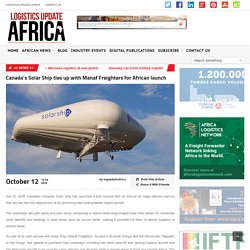 The solarships are part plane and part blimp, employing a helium-filled wing-shaped body that allows for extremely short takeoffs and landings in open areas such as soccer fields, making it possible for them to deliver supplies in remote areas. As part of its joint venture with Solar Ship, Manaf Freighters, located in Burundi, Kenya and the Democratic Republic of the Congo, has agreed to purchase four solarships, including two short take-off and landing Caracal aircraft and two Wolverine aircraft to be used for cargo delivery and disaster relief in remote areas in East and Central Africa. The two Wolverine aircraft can carry a 20-foot shipping container with a minimum payload of five tonnes. Kuehne + Nagel to support BMW Group aftersales logistics at new global distribution centre. Oct 12, 2016: Kuehne + Nagel will manage a new global distribution centre for BMW Group’s complex parts supply chain. 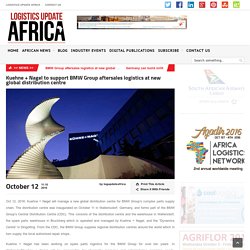 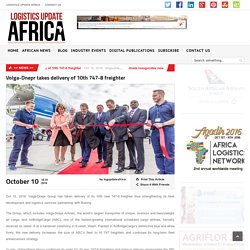 The Group, which includes Volga-Dnepr Airlines, the world’s largest transporter of unique, oversize and heavyweight air cargo, and AirBridgeCargo (ABC), one of the fastest-growing international scheduled cargo airlines, formally received its latest -8 at a handover ceremony in Everett, Wash. Painted in AirBridgeCargo’s distinctive blue and white livery, the new delivery increases the size of ABC’s fleet to 16 747 freighters and continues its long-term fleet enhancement strategy. 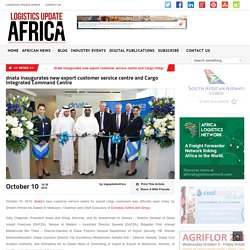 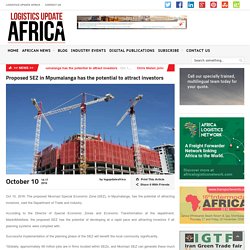 According to the Director of Special Economic Zones and Economic Transformation at the department, MaotoMolefane, the proposed SEZ has the potential of developing at a rapid pace and attracting investors if all planning systems were complied with. Successful implementation of the planning phase of the SEZ will benefit the local community significantly. “Globally, approximately 68 million jobs are in firms located within SEZs, and Nkomazi SEZ can generate these much needed jobs for the locals. Skills transfer and integration of local firms in key value chains are some of the benefits that Nkomazi SEZ could bring,” said Molefane. Chris Nielen joins Cargolux as VP-Sales. TAZARA aims at tripling cargo tonnage. Oct 10, 2016: The Tanzania-Zambia Railway Authority (TAZARA) aims at increasing its cargo haulage capacity from 600,000 per annum to two million tonnes over the next five years inorder to make it more economically viable. 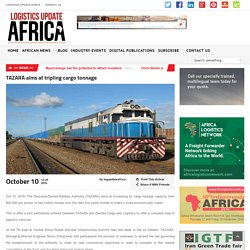 This is after a joint partnership entered between TAZARA and Zambia Cargo and Logistics to offer a complete loop of logistics services. At the 7th East & Central Africa Roads and Rail Infrastructure Summit held last week in Dar es Salaam, TAZARA, Managing Director Engineer Bruno Ching’andu told participants the process is underway to amend the law governing the establishment of the authority to meet its new commercial objectives in order to compete in the market competition in the East and Southern transport market share. Ghana starts fuel exports to West African countries. Oct 7, 2016: Ghana will begin supplying gasoline and gas oil to the landlocked countries of Burkina Faso, Niger and Mali from the Bolgatanga Petroleum Depot.

The state-owned Bulk Oil Storage and Transportation Company (BOST) is also supplying petroleum products from the depot to Benin and Nigeria. The Minister of Petroleum, Emmanuel Armah-Kofi Buahsaid there were plans to extend the exports to Liberia in the coming months. Making reference to the President’s State of the Nation Address in 2016, the minister said the vision of the government was to make Ghana the hub for the distribution of petroleum products in the West African sub-region. The Bolgatanga Petroleum Depot, with a capacity of 46 million litres of refined gasoline and gas oil, was re-inaugurated in August 2015. DP World to install largest solar rooftop project in the Middle East. Oct 7, 2016: DP World, the Dubai-based global shipping terminal operator, has begun constructing the largest distributed solar rooftop project in the Middle East with the installation of 88,000 rooftop solar panels on its Dubai facilities as part of its continued efforts to reduce its carbon emissions.

The Dubai group has appointed Green Energy Tomorrow, Phanes Group’s rooftop solar specialist, to deliver the solar panels on its warehouses, office buildings and car-parks in the Jebel Ali Free Zone (Jafza) and Mina Rashid Port. The scheme will have major environmental benefits and is part of DP World’s commitment to being a world leader in sustainability.

Once Phase One is completed in 2017, the project will provide enough clean power for 3,000 homes a year, said a statement from DP World. It will result in 22,000 tonnes of carbon being saved annually, equivalent to taking 4,500 cars off the road. Harbour Engineering Company AECOM to supervise $1.5 billion Tema port expansion project. Oct 7, 2016: AECOM will oversee the construction of the project for Meridian Port Services – the operator of the container terminal at Tema Port. AECOM will provide design and procurement management services prior to the award of construction contracts. Afterwards, it will supervise the construction of all of the port expansion facilities. The project commenced at the beginning of October 2016, with completion by Q4 2019. Cargolux and va-Q-tecink specialized container rental deal. Oct 7, 2016: Cargolux Airlines International and va-Q-tec have joined hands for a global rental agreement to use va-Q-tec’s advanced passive containers.

With this move, Cargolux will be able to further improve its portfolio and boost its CV Pharma product line that offer customers the most efficient and reliable service for time and temperature-sensitive pharma commodities. Ivory Coast inks deal for Total-led LNG consortium. Oct 6, 2016: Ivory Coast has inked a deal to create a consortium headed by France’s Total to build a liquid natural gas (LNG) import terminal that could begin receiving gas shipments by mid-2018. Ivory Coast has emerged from years of political turmoil to become one of Africa’s fastest growing economies and demand for electricity is increasing by 10 percent annually, according to the energy ministry. “The arrival of LNG in Ivory Coast opens a new era in the production of electricity,” said Energy Minister AdamaToungara at the signing ceremony in Abidjan.

Africa’s first electric rail to kick start in Ethiopia. Oct 5, 2016: Ethiopia will launch Africa’s first modern electrified railway line, which links the Ethiopian capital, Addis Ababa with the port of Djibouti. The full length of the railway is 752.7 kilometers and will travel at a speed of 120 km per hour. With a total investment of $4 billion, it was built by China Railway Group and the China Civil Engineering Construction Corporation. FAAN expands cargo operations at Enugu Airport.

Oct 5, 2016: The Federal Airports Authority of Nigeria (FAAN) has called on airline operators, service providers and the business community to take advantage of the new business opportunity provided by the commencement of international cargo operations at the AkanuIbiam International Airport, Enugu. Volga-Dnepr delivers 79 tonnes of switchgear equipment to Harare. DP World to enhance logistics services in Africa. Oct 04, 2016: Sultan Ahmed Bin Sulayem, DP World Group chairman and CEO, and chairman of the Ports, Customs and Free Zone Corporation (FZE), visited a number of African countries notably Nigeria, where he met with Akinwunmi Ambode, Governor of Lagos State and discussed ways to develop logistics services and to increase their efficiency and use.

Bin Sulayem, said, “Our global portfolio of 77 operating marine and inland terminals across six continents demonstrates our capabilities in different markets. LATAM Airlines launches new service to South Africa. Oct 04, 2016: LATAM Airlines launched new route to South Africa to expand the connectivity offered to passengers, making LATAM the only Latin American carrier to operate flights between region and the African continent. The airline deployed Boeing 767 aircraft on the route. The first flight landed on Monday afternoon at Johannesburg’s OR Tambo International Airport. Deme win first dredging contract in Mauritius for Port Louis Harbour. VLCC rates set to soar on back of increased cargo from West Africa, Middle East. Oct 3, 2016: Freight rates for very large crude carriers (VLCCs) are set to increase next week, riding high on a raft of cargo from West Africa and the Middle East. VLCC freight rates hit a multi-month high on September 29. This would result in a rise of around $10,000 per day in earnings for a VLCC from the Middle East to Asia, freight rate data on the Reuters Eikon terminal showed.