Learn How to Approach an Advanced Arm balance. 4 Steps to Master Eight-Angle Pose (Astavakrasana) Play with balance and strength as you move step by step into Astavakrasana. 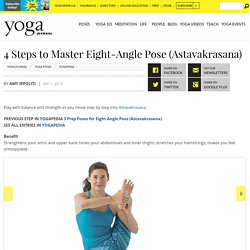 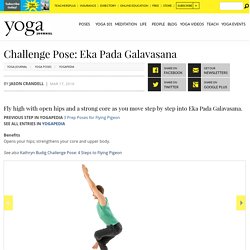 PREVIOUS STEP IN YOGAPEDIA 3 Prep Poses for Flying PigeonSEE ALL ENTRIES IN YOGAPEDIA Benefits Opens your hips; strengthens your core and upper body. The 100 Best Zen Sayings and Proverbs of All Time. I’ve always loved the religious philosophy of Zen Buddhism, for many reasons, and one of those reasons is that just by speaking a few words, Zen masters are able to transmit tremendously important messages that are of immense value to all seekers on the path to spiritual awakening. 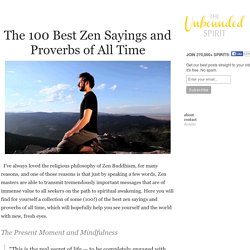 Here you will find for yourself a collection of some (100!) Of the best zen sayings and proverbs of all time, which will hopefully help you see yourself and the world with new, fresh eyes. The Present Moment and Mindfulness “This is the real secret of life — to be completely engaged with what you are doing in the here and now. DESAFÍO VERANO: GLÚTEOS PERFECTOS EN 3 EJERCICIOS! Dhyana in Hinduism. A statue of a meditating man (Kashmir, India). 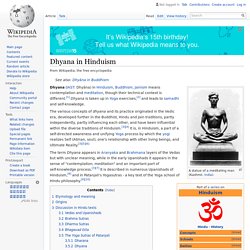 Dhyana (IAST: Dhyāna) in Hinduism, Buddhism, Jainism means contemplation and meditation, though their technical context is different. Dhyana is taken up in Yoga exercises, and leads to samadhi and self-knowledge. The various concepts of dhyana and its practice originated in the Vedic era, developed further in the Buddhist, Hindu and Jain traditions, partly independently, partly influencing each other, and have been influential within the diverse traditions of Hinduism.[3] It is, in Hinduism, a part of a self-directed awareness and unifying Yoga process by which the yogi realizes Self (Atman, soul), one's relationship with other living beings, and Ultimate Reality.[3][5] ¡La rutina de Jen Selter! Así consigue tener unos glúteos espectaculares. | 17 diciembre, 2015 Para muchos, Jen Selter es sin duda el ejemplo perfecto de tener un glúteo bien trabajado. 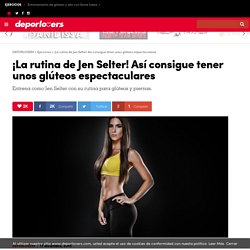 Pranayama Practice. Taoism 101: Introduction to the Tao. Learn About the Practice + How to Start. Some yoga gurus rank pranayama over asana as the most important part of the practice. 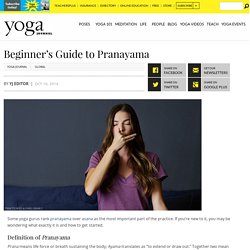 If you’re new to it, you may be wondering what exactly it is and how to get started. Definition of Pranayama Prana means life force or breath sustaining the body; Ayama translates as “to extend or draw out.” Together two mean breath extension or control. Breathing Lessons. 6 Ways to Stop Over-Thinking and Keep Yourself in The Present Moment. Overthinking can be one of the most mind-numbing things one can do to themselves. 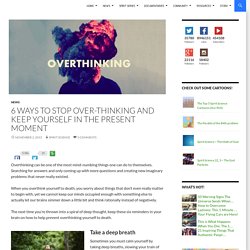 Searching for answers and only coming up with more questions and creating new imaginary problems that never really existed. When you overthink yourself to death, you worry about things that don’t even really matter to begin with, yet we cannot keep our minds occupied enough with something else to actually let our brains simmer down a little bit and think rationally instead of negatively. The next time you’re thrown into a spiral of deep thought, keep these six reminders in your brain on how to help prevent overthinking yourself to death. Take a deep breath Sometimes you must calm yourself by taking deep breaths, slowing your train of thought down, and set your brain in the right direction that isn’t going to make you self destruct. Suelo. Daniel James Shellabarger (known as Daniel Suelo, or simply Suelo, born 1961) is an American simple living adherent who stopped using money in the autumn of 2000.[1] He was born in Arvada, Colorado, a suburb of Denver, and currently lives part-time in a cave near Moab, Utah when he is not wandering the country.[1] Penguin approached Suelo about writing an autobiography, but he said that he would not accept payment for telling his story and he would be interested to do so only if the book was given away for free. 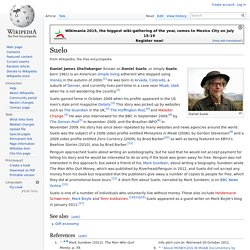 Penguin was not interested in this approach, but asked a friend of his, Mark Sundeen, about writing a biography. Sundeen wrote The Man Who Quit Money, which was published by Riverhead/Penguin in 2012, and Suelo did not accept any money from his book but requested that the publishers give away a number of copies to people for free, which they did at promotional book tours.[12] A short film about Suelo, narrated by Mark Sundeen, is on BBC News Online.[13] See also[edit] Mark Boyle (Moneyless Man) Mark Boyle aka The Moneyless Man (born 8 May 1979) is an Irish activist and writer best known for founding the online Freeconomy Community, and for living without money since November 2008.[1] Boyle writes regularly for the Freeconomy Blog and British newspaper The Guardian. 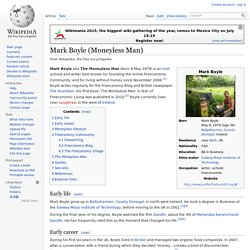 His first book, The Moneyless Man: A Year of Freeconomic Living was published in 2010.[2] Boyle currently lives near Loughrea, in the west of Ireland. Mark Boyle grew up in Ballyshannon, County Donegal, in north-west Ireland. Holy Man Hasn’t Eaten In 75 Years – Confirmed By Doctors. What is the longest you have gone without a piece of food or a glass of water? 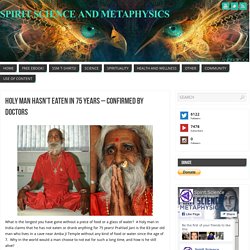 A holy man in India claims that he has not eaten or drank anything for 75 years! Prahlad Jani is the 83-year old man who lives in a cave near Amba JI Temple without any kind of food or water since the age of 7. Wing Chun Technique: Blocks, Pak Sao, Tan Sau… The Ultimate Beginners Guide To Meditation. You have read about the benefits of meditation and just want to get started. You are convinced that meditation can bring life lasting advantages and now you want a small map to guide you through the basics of meditation. You might have tried to sit once in a while, but never had a clear picture of what to do when and how to progress. If you feel yourself nodding yes, then this beginners guide to meditation is for you. This is just one way of getting started, a way I feel can have powerful and lasting effects (to also just gently let go in the end.) School of Awakening Dragon - Personal Tao.

Advanced Meditation Techniques. “When you are present, you can allow the mind to be as it is without getting entangled in it. The mind in itself is a wonderful tool. 30 Things To Start Doing For Yourself. #4 Is Absolutely Vital. EL OTRO ,YO.NUESTRO DOBLE CUANTICO....... Yoga. Chakras on Subtle Body and meditation. Within every human being there is a subtle body of three energy channels (nadis) and seven energy centres (chakras). At the root of this system lies a creative, protective and nurturing power which is a dormant, maternal energy (Kundalini). When this power is awakened within us, it rises spontaneously through the spinal column, passes through each of the chakras and emits from the fontanelle bone area on top of the head. This process is referred to as Enlightenment (Self-realization). Chakras & Kundalini. Documento sin título. Cómo abrir tus chakras espirituales.