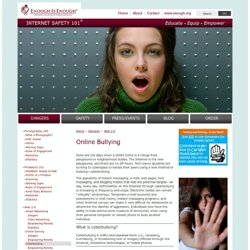 The Internet is the new playground, and there are no off-hours. Tech-savvy students are turning to cyberspace to harass their peers using a new method of bullying—cyberbullying. The popularity of instant messaging, e-mail, web pages, text messaging, and blogging means that kids are potential targets—all day, every day. Victimization on the Internet through cyberbullying is increasing in frequency and scope. Stand up to Cyberbullying. What's Going on in Their World Teens can register for sites without your knowledge or permission, and a lot of the sites they go on encourage sharing (of music, photos, videos, etc.), socializing (with people they may not know), and instant messaging (which includes video chatting). 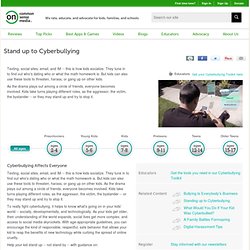 Nearly every teen has a phone and may be texting into the wee hours. With little impulse control (and little sleep), these conversations can take a turn for the worse. Where They Are Developmentally Lots of identity exploration goes on at this age, leading to some real insecurity. Teens can be very secretive -- often there's nothing specific that they're hiding, but they have a desire to make mistakes or triumphs on their own, away from parental eyeballs. Advice and Tips Conversation Starters Ethical standards really develop at this age -- both in life and online. Talk about how things can easily be misunderstood easily -- jokes can be taken the wrong way, and drama can escalate. Parent to Parent Tact is key. Home - Cyberbullying Research Center. STOP cyberbullying: Cyberbullying - what it is, how it works and how to understand and deal with cyberbullies.

Cyberbully Song - Partners In Rhyme [DL Link] Cyber bullying (Sam's Story) Delete Cyber Bullying. Home - Cyberbullying Research Center. Cyberbullying - what it is, how it works and how to understand and deal with cyberbullies. How to Know if Someone You Met Online Is a Hacker/Cyberbully. Delete Cyberbullying - Why Do People Cyberbully? Cyberbullying happens for many of the same reasons as any other type of bullying, but it may be even more appealing because it can be done anonymously. 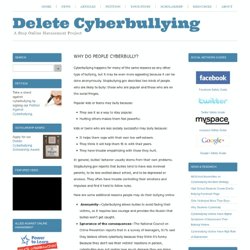 Stopbullying.gov describes two kinds of people who are likely to bully: those who are popular and those who are on the social fringes. Popular kids or teens may bully because: They see it as a way to stay popular.Hurting others makes them feel powerful. Kids or teens who are less socially successful may bully because: It helps them cope with their own low self-esteem.They think it will help them fit in with their peers.They have trouble empathizing with those they hurt.

In general, bullies’ behavior usually stems from their own problems. Stop cyberbullying. Cyberbully LEKTOR PL CAŁY FILM. What is cyberbullying, exactly? What is it? 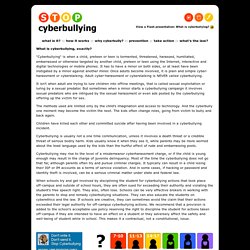 :: how it works :: why cyberbully? :: prevention :: take action :: what's the law? What is cyberbullying, exactly? "Cyberbullying" is when a child, preteen or teen is tormented, threatened, harassed, humiliated, embarrassed or otherwise targeted by another child, preteen or teen using the Internet, interactive and digital technologies or mobile phones. It has to have a minor on both sides, or at least have been instigated by a minor against another minor. It isn't when adult are trying to lure children into offline meetings, that is called sexual exploitation or luring by a sexual predator. The methods used are limited only by the child's imagination and access to technology. Children have killed each other and committed suicide after having been involved in a cyberbullying incident. Cyberbullying is usually not a one time communication, unless it involves a death threat or a credible threat of serious bodily harm.

Cyberbullying. Young people are using the Internet more than ever and most have Internet access from home. 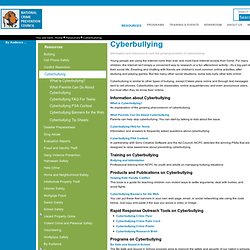 For many children, the Internet isn't simply a convenient way to research or a fun afterschool activity - it's a big part of their social life. Emailing and chatting with friends are children's most common online activities, after studying and playing games. But like many other social situations, some kids bully other kids online. Cyberbullying is similar to other types of bullying, except it takes place online and through text messages sent to cell phones. Cyberbullies can be classmates, online acquaintances, and even anonymous users, but most often they do know their victims. Cyberbullying - what it is, how it works and how to understand and deal with cyberbullies. Cyberbullying. 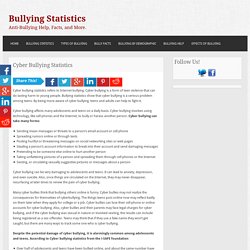 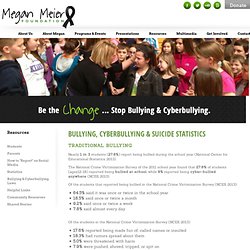 The National Crime Victimization Survey of the 2011 school year found that 27.8% of students (ages12-18) reported being bullied at school, while 9% reported being cyber-bullied anywhere (NCES, 2013). Of the students that reported being bullied in the National Crime Victimization Survey (NCES, 2013): 64.5% said it was once or twice in the school year18.5% said once or twice a month9.2% said once or twice a week7.8% said almost every day Of the students in the National Crime Victimization Survey (NCES, 2013): 17.6% reported being made fun of, called names or insulted18.3% had rumors spread about them5.0% were threatened with harm7.9% were pushed, shoved, tripped, or spit on3.3% were tried to make do things they did not want to do5.5% were excluded from activities on purpose2.8% had their property destroyed on purpose Source: U.S. Cyberbully PSA - Talent Show.