The anatomy of appetite. What actually is appetite? 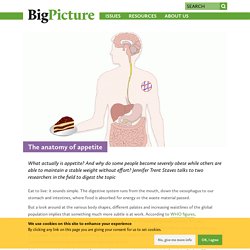 And why do some people become severely obese while others are able to maintain a stable weight without effort? Jennifer Trent Staves talks to two researchers in the field to digest the topic Eat to live: it sounds simple. Yes, The Calorie Is Broken. Here's Why. Our List — PROJECT DRAWDOWN.

How much enough exercise 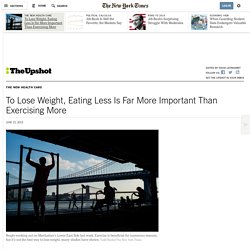 Urban farms now produce 1/5 of the world's food. Reprinted with permission from Ensia. 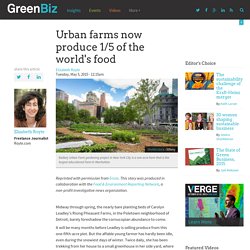 This story was produced in collaboration with the Food & Environment Reporting Network, a non-profit investigative news organization. Midway through spring, the nearly bare planting beds of Carolyn Leadley’s Rising Pheasant Farms, in the Poletown neighborhood of Detroit, barely foreshadow the cornucopian abundance to come. Interlocking windmills make green energy as easy as assembling LEGOs. The German company EMAMIDESIGN has developed an innovative way to harness the power of wind. 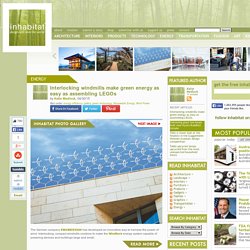 Interlocking, compact windmills combine to make the Windflock energy system capable of powering devices and buildings large and small. See the 50 Best Images Taken by Hubble. After a quarter of a century on the job, the Hubble Space Telescope has returned some of the most extraordinary cosmic images ever captured See the 50 Best Photos Taken by Hubble NASA/ESA/Hubble Heritage Team (STScI/AURA) 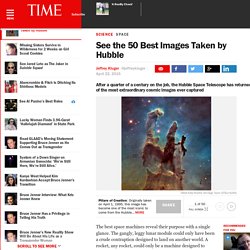 How We Know How Many Galaxies Are In The Universe, Thanks To Hubble. Working-Class Kids Don’t Ask Enough Questions. Because of the Occupy movement, coverage of the widening wealth gap, a certain best-selling book by a certain rock-star economist, and a bunch of other factors, inequality has been a hot topic in the United States the last few years. 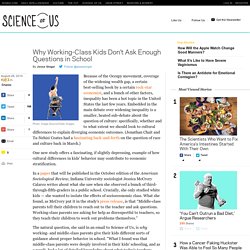 Embedded in the main debate over widening inequality is a smaller, heated sub-debate about the question of culture: specifically, whether and to what extent we should look to cultural differences to explain diverging economic outcomes. (Jonathan Chait and Ta-Nehisi Coates had a fascinating back-and-forth on the question of race and culture back in March.) One new study offers a fascinating, if slightly depressing, example of how cultural differences in kids’ behavior may contribute to economic stratification. To ask a question, one must know enough to know what is not known.

University of California, San Diego, USA Received 7 November 1978, Available online 13 October 2004 Choose an option to locate/access this article: Check if you have access through your login credentials or your institution Check access Get rights and content In this study, we test the notion that a prerequisite for asking questions about new topic matter is some appropriate level of knowledge. 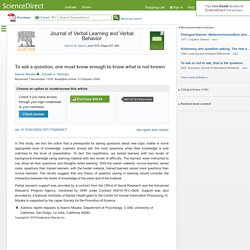 It is not enough to be busy. So are the ants. The question is: What are we busy about... - Henry David Thoreau at BrainyQuote. Is There Enough Meat for Everyone? In my late twenties I went vegetarian for a year. 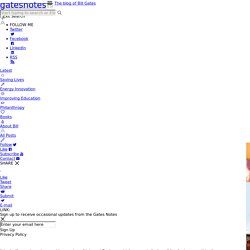 Some of my friends were strict non-meat-eaters, and I wanted to try it out. Plus I was flying a lot for work and found that the airplane meals made with tomatoes and beans just tasted better than the shoe-leather beef. In the end, though, I couldn’t keep it going, and I eventually returned to my carnivorous ways. A father’s pressing question: How many AP courses are enough? 15 Domain Name Generators To Help To Choose The Best Domain Name. Registering the perfect domain name is an extremely important decision. 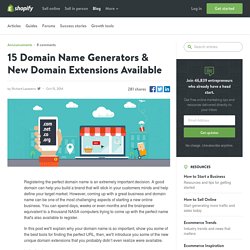 A good domain can help you build a brand that will stick in your customers minds and help define your target market. Top Web Design Trends for 2015. There’s no clear-cut scientific formula to great design because it’s undoubtedly considered more of an art than a science. 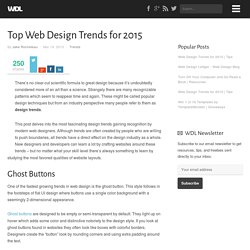 Strangely there are many recognizable patterns which seem to reappear time and again. These might be called popular design techniques but from an industry perspective many people refer to them as design trends. This post delves into the most fascinating design trends gaining recognition by modern web designers. Although trends are often created by people who are willing to push boundaries, all trends have a direct effect on the design industry as a whole.

How much time for doctor...tincture of time

You Decide. Are you giving your clients too many options? February 10, 2014 Brain Games is an ambitious new program on National Geographic that tries to get in viewers' heads with different interactive experiments that reveal the inner workings of our brains. Many of the experiments challenge what you think you know to be true about something, and a recent episode focused on the notion of ‘choice' – how choices we are given impact our level of happiness or displeasure.

The host put forward the assumption that providing people with more choices makes them happier, because they do not feel restricted selecting an option that is not right for them. In the show, the hosts asks whether you preferred choosing between more than 20 flavors of ice cream, or between three flavors of ice cream. Enough Is Plenty: Public and Private Policies for the 21st Century: Anne B. Ryan: 9781846942396: Amazon.com: Books. If we could give every individual the right amount of nourishment and exercise, not too... - Hippocrates at BrainyQuote. An Introduction to Color Theory for Web Designers.