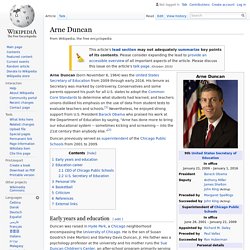 His tenure as Secretary was marked by controversy. Conservatives and some parents opposed his push for all U.S. states to adopt the Common Core Standards to determine what students had learned, and teachers unions disliked his emphasis on the use of data from student tests to evaluate teachers and schools.[1] Nevertheless, he enjoyed strong support from U.S. President Barack Obama who praised his work at the Department of Education by saying, "Arne has done more to bring our educational system -- sometimes kicking and screaming -- into the 21st century than anybody else. 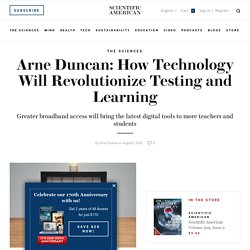 It was located in Kristie Ford's classroom in Detroit. On the day I was invited, the class of fifth and sixth graders was a hive of activity and motion, which Ford did not need to closely direct. Instead as she talked individually with a few students, others worked independently in small clusters discussing their study of the solar system or sprawled on the floor constructing 3-D models. Still others were enmeshed in learning games and apps on laptops. But as Ford and others at the Brenda Scott Academy for Theatre Arts made clear, the bustle was about more than fun and engaging tasks and cool technology. In traditional classrooms, students complete a lesson and move on to the next when it is time for the whole class to do so—regardless of whether they have mastered it or they are already well ahead.

Technology and Change Today's elementary school students will be completing college around 2030. 5 min. Arne Duncan talks about the 2010 National Technology Plan. Re: Duncan's Legacy in Ed-Tech. What's Arne Duncan's Legacy on Ed-Tech? Arne Duncan has announced his plans to resign as U.S. secretary of education later this year, bringing an end to a long tenure in which he pushed for far-reaching and sometimes divisive changes in school policy. 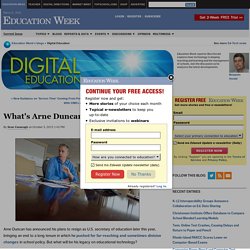 But what will be his legacy on educational technology? Duncan served as secretary at a dynamic time in the ed-tech space. Private investors were pouring vast amounts of money into digital products, seeking financial returns, during his time in office. And districts were taking on ambitious and in some cases daring ed-tech projects in the hopes of leading to increased student learning and engagement. But it was also a confusing time for many K-12 officials. As secretary, Duncan had limited ability to shape many of the forces at work in the ed-tech space. Caveats aside, here are a couple of the defining aspects of Duncan's time in office, as they pertain to ed-tech: The Loss of the Enhancing Education Through Technology Funds Program Support for States' Migration to Online Testing. Re: Ed Tech Developer's Guide. Ed Tech Developer’s Guide. Re: Learning Registry. Departments of Education and Defense to Launch “Learning Registry” Tools and Community. 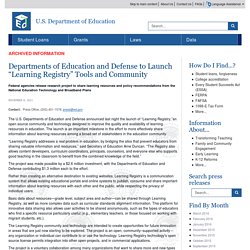 Departments of Education and Defense announced last night the launch of “Learning Registry,”an open source community and technology designed to improve the quality and availability of learning resources in education. The launch is an important milestone in the effort to more effectively share information about learning resources among a broad set of stakeholders in the education community. “Learning Registry addresses a real problem in education, by bridging the silos that prevent educators from sharing valuable information and resources,” said Secretary of Education Arne Duncan. “The Registry also allows content developers, curriculum coordinators, principals, counselors, and everyone else who supports good teaching in the classroom to benefit from the combined knowledge of the field.”

The project was made possible by a $2.6 million investment, with the Departments of Education and Defense contributing $1.3 million each to the effort.