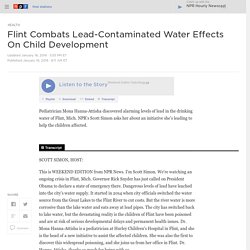 NPR's Scott Simon asks her about an initiative she's leading to help the children affected. This is WEEKEND EDITION from NPR News. I'm Scott Simon. We're watching an ongoing crisis in Flint, Mich. Governor Rick Snyder has just called on President Obama to declare a state of emergency there. MONA HANNA-ATTISHA: Thanks for having me, Scott. SIMON: You confided in a recent interview that when pediatricians hear the word lead we freak out. HANNA-ATTISHA: We know lead - lead is a potent, irreversible neurotoxin. Pollution tutorial. Why farmers are concerned about EPA’s new rules on protected water. Clean Water Act: Better at 40. 13 059 8 CleanWater LP v4. NOW with Bill Moyers. Science & Health. Troubled Waters - A Brief History of the Clean Water Act. Model My Watershed: Simple Water Balance Simulator. ITSI Portal. The Innovative Technology in Science Inquiry project engages students in STEM activities through the integrated use of technologies that include modeling, computational thinking, and real-time data acquisition. 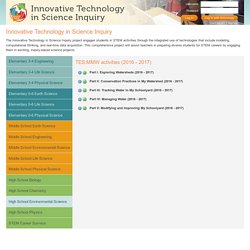 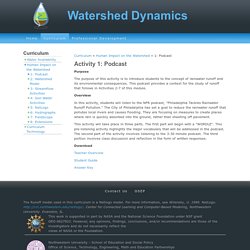 This podcast provides a context for the study of runoff that follows in Activities 2-7 of this module. Overview In this activity, students will listen to the NPR podcast, "Philadelphia Tackles Rainwater Runoff Pollution. " Water-Related Issues in Montana. The population of much of western and south-central Montana is increasing rapidly. 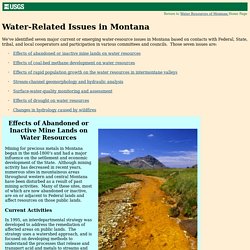 Some of the increase is occurring in cities—such as Bozeman, Missoula, Kalispell, and Helena—but much of the increase is occurring outside of established cities and towns, in areas such as the Gallatin, Bitterroot, Missoula, Paradise, Flathead, and Helena Valleys. Population increases in cities create additional demands on public water supplies and larger sewage outflows, which can affect the quantity and quality of surface water. Population increases in suburban or rural settings typically create additional demands on groundwater for individual supplies and additional stresses on groundwater quality through the use of individual septic systems. Septic systems may leach nitrates, wastewater compounds such as pharmaceuticals, and even bacteria and viruses into shallow aquifers.

Current Activities We have recently completed studies in the Helena and Gallatin valleys examining these issues. Water Use Today. Water in Daily Life In the United States, we are lucky to have easy access to some of the safest treated water in the world—just by turning on the tap. 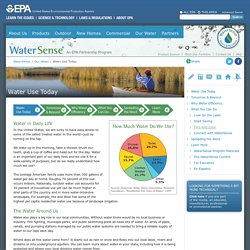 We wake up in the morning, take a shower, brush our teeth, grab a cup of coffee and head out for the day. Water is an important part of our daily lives and we use it for a wide variety of purposes, but do we really understand how much we use? The average American family uses more than 300 gallons of water per day at home. Roughly 70 percent of this use occurs indoors. Gicima. These layers have been selected based of their importance to groundwater related programs and data. 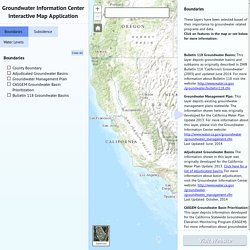 Confronting a World Freshwater Crisis. Vital Water Graphics. The terms of the equation remain simple: for the next few decades, given the volume of available water, and under the present circumstances, will it be possible to provide enough water to a population forecast to be at least 9 billion by 2050 (according to the medium hypothesis proposed by the United Nations) using a volume which will be roughly the same as it is now? 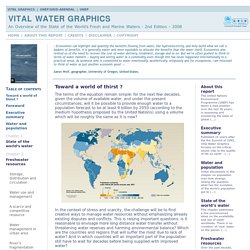 In the context of stress and scarcity, the challenge will be to find creative ways to manage water resources without emphasizing already existing disputes and conflicts. A Little Bit of Water, A Lot of Impact : Feature Articles. The moisture trapped in the soil affects a lot more than the health of crops and trees. by Kathryn Hansen Design by Joshua Stevens November 4, 2015. 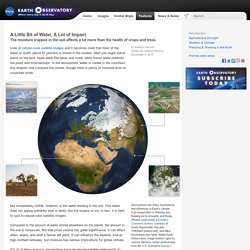 The Gravity of Water : Feature Articles. The GRACE mission offers a novel and much neededview of Earth’s water supplies By Holli Riebeek Design by Robert Simmon September 12, 2012 The signature of drought was easy to read in the southern United States in the summer of 2011. 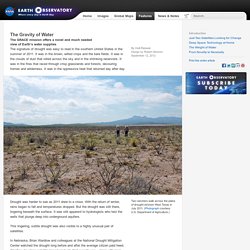 It was in the brown, wilted crops and the bare fields. Earth Observatory : Home. By Steve Graham, Claire Parkinson, and Mous Chahine Design by Robert Simmon October 1, 2010 A previous version of this article, published in 2000, is now archived as a PDF file. 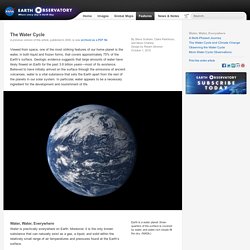 Geological Survey's (USGS) Water Science School. We offer information on many aspects of water, along with pictures, data, maps, and an interactive center where you can give opinions and test your water knowledge. U.S. Drought Portal. Education A variety of organizations and agencies have produced educational materials on drought. 2009_04_29_kids_activity_grades_9-12_buildingamodelaquifer.pdf. Lesson_plan09.pdf. Small Grants for K-12 Science Teaching - You Can Get One! Materials for Hands-On Learning If you are an enthusiastic science teacher, you can probably make a long list of lessons that would be easier to teach and more engaging for your students if you had the proper materials for a hands-on lesson. For Teachers (Grades 9-12) You will need Adobe Reader to view some of the files on this page. See EPA's PDF page to learn more. * This link will open up a large file that may take several minutes to open based on your internet connection speed. (Requires Adobe Flash Classroom Lessons.

Give Water - The Water Project. Water-related Education Materials for High School. 12-395. EnvLit - Working Groups - Water Cycle. 34 Surprising Facts You Need to Know About California's Drought. California, like much of the West, has been locked in a years-long drought scientists say could be a harbinger of things to come. Tree-ring records show that droughts lasting decades have hit the region in centuries past, and a warming climate will make much precipitation in and around the state—now delivered in the form of snow, which conveniently stores water for dry summer months—more difficult to capture.

The nation's largest state by population and agricultural production need not be a victim of natural forces, however. Nearly Half the World Lacks Access to Clean Water and Sanitation—and That’s the Good News. Quick, name two things you take for granted nearly every day. Two Billion People Are Running out of Water. Forget about peak oil—we should be worrying about peak water: Groundwater basins that supply 2 billion people are being rapidly depleted, according to a new study. Takepart. Earlier this year, an obscure United Nations document, the World Water Development Report, unexpectedly made headlines around the world.

The report made the startling claim that the world would face a 40 percent shortfall in freshwater in as soon as 15 years. Crops would fail. A New Theory About What's Causing Oklahoma's Earthquakes. It's been a shaky last week here in central Oklahoma, following on the heels of a shaky last year -- a record-breaking year, in fact. Trunks. About the Trunks View Trunks Brochure Montana Watercourse is excited to offer water-focused educational teaching trunks: Ground Water Flow Model, Enviroscape Model, Literature Trunk, Ponds Trunk, Riparian and Wetlands, and Stream Ecology. Each Montana Watercourse trunk is easily transported and packed with everything you need to supplement your unit. Montana Water. Headwaters2.pdf. Exhibit4.pdf. Once-vast Aral Sea dries up to almost nothing. The Aral Sea was once the world's fourth-largest lake.

Now much of it is a vast toxic desert straddling the borders of Kazakhstan and Uzbekistan, two former Soviet states in central Asia. In recently released images, NASA's Earth Observatory shows the extent of the lake's recession over the past 14 years.