Kiddom: Data-Informed Instructional Platform. Mathinthemedian / Moodle for Standards-Based Grading. Ready to set up a moodle gradebook to help with standards based grading? 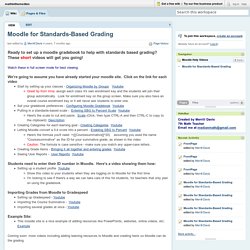 These short videos will get you going! Watch these in full screen mode for best viewing: We're going to assume you have already started your moodle site. Click on the link for each video Start by setting up your classes - Organizing Moodle by Groups YoutubeGreat tip from Irma: assign each class it's own enrollment key and the students will join their group automatically.

Students need to enter their ID number in Moodle. Setting up a student profile YoutubeShow this video to your students when they are logging on to Moodle for the first timeI'm looking to see if there's a way we can take care of this for students, for teachers that only plan on using the gradebook. How to Turn Rubric Scores into Grades. I have written several posts about the different types of rubrics—especially my favorite, the single-point rubric—and over time, many teachers have asked me about the most effective way to convert the information on these rubrics into points. 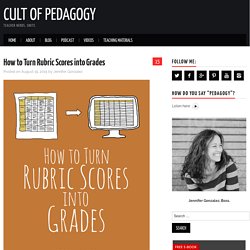 Even if you are moving toward a no grades classroom, as a growing number of educators are, you may still be required to supply points or letter grades for student assignments. Despite the title of this post, all I can really offer here is a description of my own process. It has been refined over years of trial and error, and the only evidence I have to back up its effectiveness is that in over 10 years of teaching middle school and college, I can only recall one or two times when a student or parent challenged a grade I gave based on a rubric. This is by no means the only way to do it—I’m sure plenty of other processes exist—but this is what has worked for me. To start with, I have to get clear on what the final product should look like. References: What is the Difference between Standards-Based Grading (or Reporting) and Competency-Based Education?

Matt Townsley Here in Iowa, competency-based education is gaining traction at the state and grassroots level. 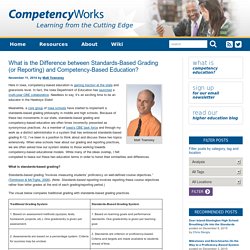 In fact, the Iowa Department of Education has launched a multi-year CBE collaborative. Needless to say, it’s an exciting time to be an educator in the Hawkeye State! Meanwhile, a core group of Iowa schools have started to implement a standards-based grading philosophy in middle and high schools. Because of these two movements in our state, standards-based grading and competency-based education are often times incorrectly presented as synonymous practices. Standards-based grading “involves measuring students’ proficiency on well-defined course objectives.” The visual below compares traditional grading with standards-based grading practices. Adapted from O’Connor K (2002). In our district, secondary teachers are required to abide by the following grading guidelines: Entries in the grade book that count towards the final grade will be limited to course or grade level standards.

A. Resources - Vermont Standards Based Learning Collective. Are Letter Grades Failing Our Students? In Colorado, districts want to get rid of ‘D’s’ in their grading systems. 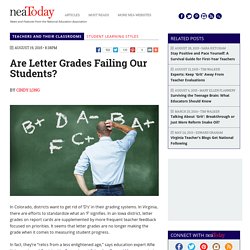 In Virginia, there are efforts to standardize what an ‘F’ signifies. In an Iowa district, letter grades on report cards are supplemented by more frequent teacher feedback focused on priorities. It seems that letter grades are no longer making the grade when it comes to measuring student progress. In fact, they’re “relics from a less enlightened age,” says education expert Alfie Kohn, author of Punished by Rewards and Schooling Beyond Measure and who Time magazine describes as “perhaps the country’s most outspoken critic of education’s fixation on grades [and] test scores.” According to Kohn, letter grades are not only unnecessary but harmful. “That’s why the best teachers and schools replace grades (and grade-like reports) with narrative reports – qualitative accounts of student performance – or, better yet, conferences with students and parents.”

Chemistry. I’ve been piloting a standards-based grading system in my Advanced Chemistry course this year. 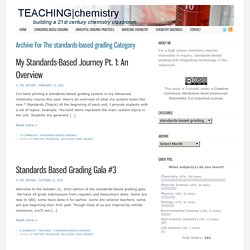 Here’s an overview of what my system looks like now.* Standards (Topics) At the beginning of each unit, I provide students with a list of topics: Example: The bold items represent the main content topics in the unit. Students are generally […] Read more » Welcome to the October 21, 2010 edition of the standards-based grading gala. We have 24 great submissions from regulars and newcomers alike. Read more » The first standards-based grading gala hosted by Matt had 20 great submissions from SBG veterans and SBG newbies alike.

Read more » At the end of 2009-2010, I wrote a modified draft of my course expectations. Read more » Snippets from a syllabus I found online: What message does this send to the students about learning? AAAS Science Assessment ~ Home. Standards Based Biology. APBioStandardsSciPracNew. Standards-Based Grading Videos. Sbgbeginners - home.