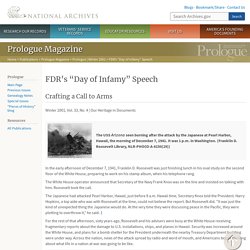 Roosevelt was just finishing lunch in his oval study on the second floor of the White House, preparing to work on his stamp album, when his telephone rang. The White House operator announced that Secretary of the Navy Frank Knox was on the line and insisted on talking with him. Veteran Norman Ikari remembers the announcement of the attack on Pearl Harbor (National WWII Museum)

Annotation Norman Ikari was born in Seattle, Washington on 17 February 1919. 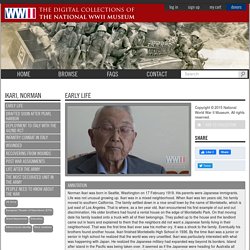 His parents were Japanese immigrants. Life was not unusual growing up. Ikari was in a mixed neighborhood. When Ikari was ten years old, his family moved to southern California. Norman Ikari recalls Pearl Harbor very well. Norman Ikari’s request for a transfer to the 442nd Regimental Combat Team was granted, but he was busted down from sergeant to private. James Bollich recalls hearing the Pearl Harbor had been attacked (National WWII Museum) Annotation James J. 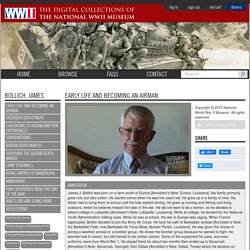 When James Bollich ran out of food, he started hunting. James Bollich had no idea there was going to be a surrender. Going through a barrier, James Bollich and a friend ran into Japanese troops after getting separated from the group. James Bollich was only able to get water from one place [Annotator's Note: in the Camp O’Donnell prisoner of war camp], but there was nothing to put water in. 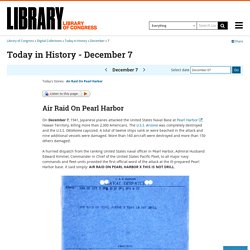 The U.S.S. Arizona was completely destroyed and the U.S.S. Oklahoma capsized. A total of twelve ships sank or were beached in the attack and nine additional vessels were damaged. More than 160 aircraft were destroyed and more than 150 others damaged. A hurried dispatch from the ranking United States naval officer in Pearl Harbor, Admiral Husband Edward Kimmel, Commander in Chief of the United States Pacific Fleet, to all major navy commands and fleet units provided the first official word of the attack at the ill-prepared Pearl Harbor base.

The following day, in an address to a joint session of Congress, President Franklin Roosevelt called December 7, 1941 “a date which will live in infamy.” “My first thought was what a great pity that… another nation should be added to those aggressors who strove to limit our freedom. Photograph, Pearl Harbor bombing. Destruction. Japanese announcement of the attack at Pearl Harbor, 1941 (with translation) In January 1941, Admiral Isoroku Yamamoto began developing a plan to attack the American base in Pearl Harbor, Hawaii. 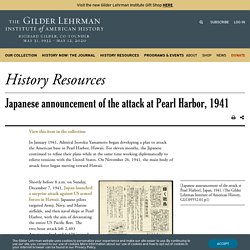 For eleven months, the Japanese continued to refine their plans while at the same time working diplomatically to relieve tensions with the United States. On November 26, 1941, the main body of attack force began moving toward Hawaii. Shortly before 8 a.m. on Sunday, December 7, 1941, Japan launched a surprise attack against US armed forces in Hawaii. Japanese pilots targeted Army, Navy, and Marine airfields, and then naval ships at Pearl Harbor, with the aim of devastating the entire US Pacific fleet. The two-hour attack left 2,403 Americans dead and 1,178 injured, and was followed by a formal declaration of war against the United States. In this printed announcement, the Japanese government provides a detailed account of its victory over the Americans at Pearl Harbor and the British in Malaya and Hong Kong. Excerpt What an uproar! NY Times - A Candid Account of Losses at Pearl Harbor (Proquest - SB Access only) NY Times - Shipman sought for Pearl Harbor jobs (Proquest - SB Access only)