Rising costs pile on the agony for Britain’s fashion retailers. From culottes to “cold shoulder” tops and woven loafers last seen in Miami Vice, many Britons have struggled with this summer’s fashions, but now there is an even more unpalatable trend on the horizon – in the shape of higher prices. 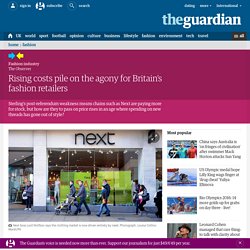 The devaluation of sterling following the June Brexit vote has had major ramifications for store chiefs who pay in dollars for large quantities of imported goods. The first indication of where prices could be heading came last week from Next, one of the UK’s biggest clothing retailers, which pencilled in increases of up to 5% in 2017. “We have always taken the view that if our costs go up, our selling prices will go up,” said Next chief executive Lord Wolfson. But fashion retailers are already struggling to persuade shoppers to part with their cash as weak wage growth is compounded by a cyclical shift towards spending on eating out and other leisure activities. Kantar analyst Glen Tooke says its most recent reading shows the decline deepening. Brexit 'means economy faces 50/50 recession chance' Image copyright Reuters The UK has a 50/50 chance of falling into recession within the next 18 months following the Brexit vote, says a leading economic forecaster. 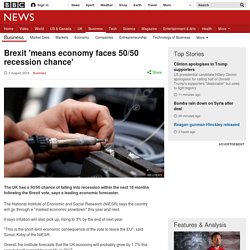 The National Institute of Economic and Social Research (NIESR) says the country will go through a "marked economic slowdown" this year and next. It says inflation will also pick up, rising to 3% by the end of next year. "This is the short-term economic consequence of the vote to leave the EU", said Simon Kirby of the NIESR. Overall the institute forecasts that the UK economy will probably grow by 1.7% this year but will expand by just 1% in 2017.

This would see the UK avoid a technical recession, typically defined as two consecutive quarters of economic contraction. Mr Kirby argued that the June referendum vote had led to such financial and political uncertainty that this would bear directly on the spending and investment decisions of both businesses and households. Now, the culprit is the uncertainty following June's Brexit vote. Retailers challenge national living wage. Don-Alvin Adegeest London - While the government has thus far been successful in its policy to increase the UK's national living age, some businesses and retailers are keen for the policy, set to come into full affect by 2020, to be revised or abandoned. 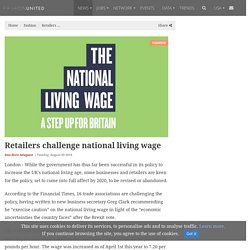 According to the Financial Times, 16 trade associations are challenging the policy, having written to new business secretary Greg Clark recommending he “exercise caution” on the national living wage in light of the “economic uncertainties the country faces” after the Brexit vote. The national living wage is one of George Osborne's legacy policies, to ensure over 25 year-olds earn a median income, which by 2020 would be just over 9 pounds per hour. The wage was increased as of April 1st this year to 7.20 per hour. Fashion chains, supermarkets and the hospitality sector are expecting to have to raise wages. 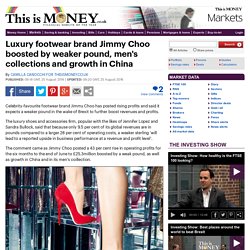 The luxury shoes and accessories firm, popular with the likes of Jennifer Lopez and Sandra Bullock, said that because only 9.5 per cent of its global revenues are in pounds compared to a larger 28 per cent of operating costs, a weaker sterling ‘will lead to a reported upside in business performance at a revenue and profit level’.

The comment came as Jimmy Choo posted a 43 per cent rise in operating profits for the six months to the end of June to £25.3million boosted by a weak pound, as well as growth in China and in its men's coillection. Luxury appetite: Jimmy Choo said it saw ‘impressive’ growth in China, which has been a tough market for its competitors recently While being well-known for its skyscraper heels, Jimmy Choo's men’s line and handbags have also been doing well. Prediction: There will be no more billion dollar brands.