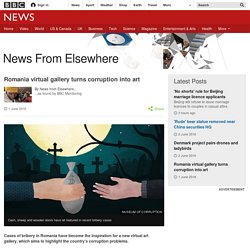 The Museum of Corruption can be "toured" online, with a host of unusual bribes depicted on its digital walls, the Ziarul de Iasi news website reports. Among them, a piece called "Bribe in the Cemetery" relates to Romania's former finance minister, Darius Valcov, who is on trial for corruption and allegedly accepted bags of cash while in a graveyard. The gallery format was chosen because corrupt officials "have managed to raise bribery to the level of art", according to the project's Facebook page.

It was developed by digital marketing agency Kinecto Isobar, which tells the BBC that there's an educational aim, highlighting that cash isn't the only way of bribing people. Next story: Rewards for South Korea soldiers who quit smoking. Explicit cookie consent. Russia Calls New U.S. Missile Defense System a ‘Direct Threat’ Video MOSCOW — As American and allied officials celebrated the opening of a long-awaited missile defense system in Europe with a ribbon cutting and a band, the reaction in on Thursday suggested the system had raised the risks of a nuclear war. 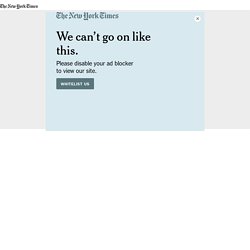 Russian officials reiterated their position that the American-built system imperiled Russia’s security. But the public discussion in Russia was darker, including online commentary of how a nuclear confrontation might play out in Europe, and the prospect that , the system’s host, might be reduced to “smoking ruins.” “We have been saying right from when this story started that our experts are convinced that the deployment of the ABM system poses a certain threat to the Russian Federation,” the Kremlin spokesman, Dmitri S.

Peskov, told reporters in a conference call. “Measures are being taken to ensure the necessary level of security for Russia,” he said. Photo “We have to announce this openly, without any additional diplomatic formulations,” Ms. Romania Takes Step Toward Restitution to Holocaust Survivors. BUCHAREST, Romania — The Romanian government on Tuesday approved legislation that would give priority to restitution claims by Holocaust survivors for property lost during and under Communist rule. 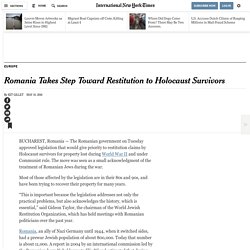 The move was seen as a small acknowledgment of the treatment of Romanian Jews during the war. Most of those affected by the legislation are in their 80s and 90s, and have been trying to recover their property for many years. Romanian village blocks Canadian firm from mining for gold. A Romanian village where a Canadian firm is planning a controversial open-cast goldmine has been declared a site of historical interest, granting it protection from mining activity. 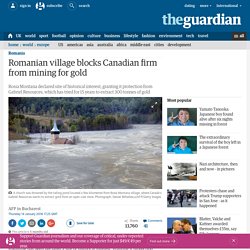 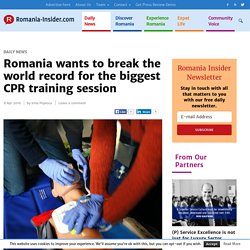 The previous record was set in Germany on September 17, 2013, during a training session that involved 11,840 participants. The event in Romania thus needs to gather more people to set a new record. “If there will be 11,800 people and not 12,000, it will still be a record for us if not a Guinness record, and an advantage for Bucharest.

Three arrested after baby 'sold' for thousands of pounds. Police said their suspicions grew after they discovered she had registered the child's birth twice, firstly under her name and then the name of the supposed father. • More than 1,000 arrested over baby trafficking in China. 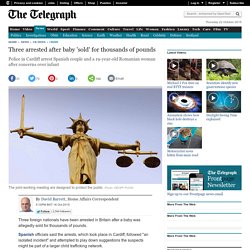 Romanian jailer gets 20 years for crimes against humanity. “The sick were not treated or transferred to hospitals; the prisoners’ health was damaged by a lack of food, lack of heat, abusive punishments, and they were also subject to inhuman detention conditions, beatings and violence.” 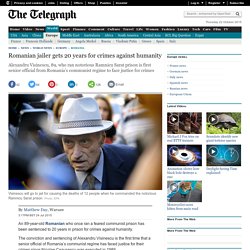 As many of the inmates at Ramnicu were political prisoners carrying 10-year sentences they had little chance of surviving the institution’s regime. Valentin Cristea, the only living survivor of Ramnicu, described how he had weighed 11 stone when he entered the prison but only eight stone when he left. He also said prisoners were not allowed to talk with each other, and when let out for a solitary 15-minute walk each day they were not allowed to look at the sky. Any transgression resulted in harsh punishment. A relative of one of the prison’s victims welcomed Visinescu’s sentencing but also complained that it had taken so long for him to face justice.

“It [justice] has come very late, but there’s nothing I can do about it,” she said. Romanian MP jailed for bribing voters with 60 tonnes of roasted chicken. Enlisting the help of supporters Florin Popescu distributed 60 tonnes of chicken to voters in an attempt to win another term as a council leader in local elections dating back to 2012 before he entered parliament. 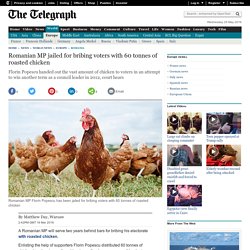 A Bucharest court placed the condition of no parole on Popescu’s sentence while also rejecting an appeal by the disgraced politician during the culmination of a case that won him the mocking nickname the “Chicken Baron”. Anti-corruption investigators had found that Popescu had abused his high position in local politics to secure a supply of roasted chicken worth around £85,000 from a producer. “On April 5, 2012 several people sent by Florin Popescu loaded the chicken into vans and took it to various locations where it was distributed,” investigators said. Romania Places the Heart of a Queen in Her Castle. Photo BUCHAREST, Romania — It has been a busy few years for royal remains. 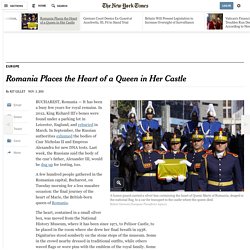 In 2012, King Richard III’s bones were found under a parking lot in Leicester, England, and reburied in March. Romanian nightclub fire leaves 27 dead, scores injured. But a fire that may have been sparked by pyrotechnics late Friday quickly erupted with dark, blinding smoke -- killing at least 27 people and injuring more than 160 others, authorities said. 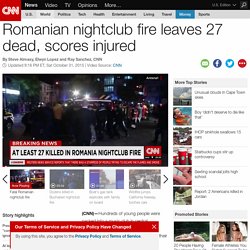