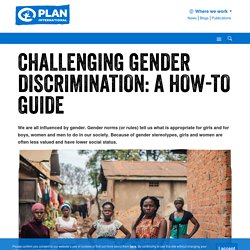 Gender norms (or rules) tell us what is appropriate for girls and for boys, women and men to do in our society. Because of gender stereotypes, girls and women are often less valued and have lower social status. Girls and women suffer most of the negative impact of rigid gender norms and roles - they are more likely to experience restrictions of their freedom and mobility, they experience epidemic levels of violence and harassment across the globe and have fewer opportunities to choose how to live their lives.

But boys and men suffer too. Denying people the freedom to choose their path in life because of their gender prevents them from fulfilling their full potential. What is gender discrimination? Gender discrimination describes the situation in which people are treated differently simply because they are male or female, rather than on the basis of their individual skills or capabilities. Moodle. Global Education, Teaching Resources “No one is born a good citizen; no nation is born a democracy. 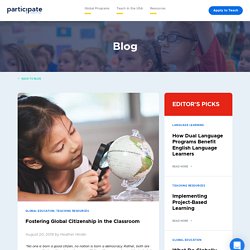 Rather, both are processes that continue to evolve over a lifetime. Young people must be included from birth. A society that cuts off from its youth severs its lifeline.” —Kofi Annan What Is Global Citizenship? Global citizenship is the idea that people have rights and responsibilities that come with being a citizen of the entire world, rather than a particular nation or place. As a culture, we tend to organize ourselves into groups and communities that share common values, ideas, and identity. We All Live on the Same Earth The internet has made our world seem much smaller.

As our world shrinks, our ability to understand and accept other cultures, races, religions, and values grows exponentially. As we recognize our world as the sum of its parts, we begin to understand that issues surrounding the environment, human rights, religion, and social justice directly affect all of us. Blog.thelinguist. How Important is Culture When Learning a Language? “Negotiate a river by following its bends, enter a country by following its customs.” 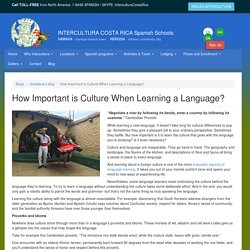 Proverbs and Idioms Nowhere does culture shine through more than in a language’s proverbs and idioms. Take for example this Cambodian proverb: “The immature rice stalk stands erect, while the mature stalk, heavy with grain, bends over.” Food and Flavor Food is culture made manifest. About the Author: Why You Should Learn Cultures, Not Languages. Language and Culture affect each other and language learning. People do intuitively understand that there is a connection between languages and culture but sometimes the relationship between language learning and culture is not sufficiently explored. 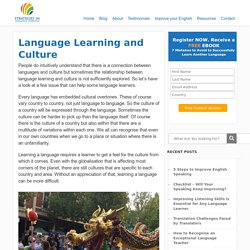 So let’s have a look at a few issue that can help some language learners. Every language has embedded cultural overtones. These of course vary country to country, not just language to language. So the culture of a country will be expressed through the language. Sometimes the culture can be harder to pick up than the language itself. Learning a language requires a learner to get a feel for the culture from which it comes. In an article coming out of a Canadian newspaper from Ottowa on May 31, 2012, some research was cited showing just how important cultural and personal issues are in learning languages. The study by Professor “Tracey Derwing and Erin Waugh looked at the role of language and cultural practices at how immigrants develop friendships, join social organizations …. within the mainstream.” Is culture important in language learning? The relationship between language and culture is a complex one and it is always quite challenging to fully understand people’s cognitive processes when they communicate. 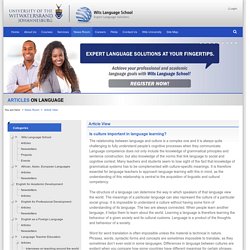 Language competence does not only include the knowledge of grammatical principles and sentence construction, but also knowledge of the norms that link language to social and cognitive context. Many teachers and students seem to lose sight of the fact that knowledge of grammatical systems has to be complemented with culture-specific meanings. It is therefore essential for language teachers to approach language learning with this in mind, as the understanding of this relationship is central to the acquisition of linguistic and cultural competency. The structure of a language can determine the way in which speakers of that language view the world.