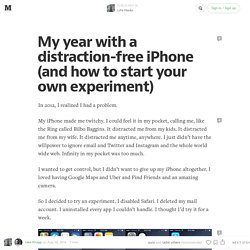 My iPhone made me twitchy. I could feel it in my pocket, calling me, like the Ring called Bilbo Baggins. It distracted me from my kids. It distracted me from my wife. I wanted to get control, but I didn’t want to give up my iPhone altogether. So I decided to try an experiment. App Offtime is for people addicted to their smartphones. Offtime was developed by Berlin-based psychologist Alexander SteinhartIt lets users customise their connectivity - limiting app usage, calls and textsWhen a phone is in Offtime mode, only pre-selected numbers can call or textUsers can also block the use of certain apps so they’re not a distractionApp reveals how much time is spent on certain apps to identify habitsIts effectiveness is backed up by a university-backed research paper By Victoria Woollaston for MailOnline Published: 16:37 GMT, 30 October 2014 | Updated: 17:40 GMT, 30 October 2014. 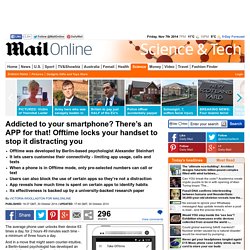 A New App Called Offtime Helps You Unplug Without Missing Out. Apparently, navel-gazing about how much time you’re spending on your phone is a thing now. 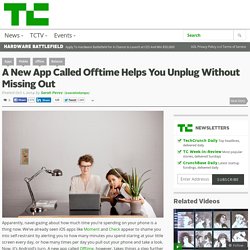 We’ve already seen iOS apps like Moment and Check appear to shame you into self-restraint by alerting you to how many minutes you spend staring at your little screen every day, or how many times per day you pull out your phone and take a look. Now, it’s Android’s turn. A new app called Offtime, however, takes things a step further – it doesn’t just identify your bad habits, it also helps you break them. Based in Berlin, the idea for the app comes from a psychologist, now Offtime CEO, Alexander Steinhart, and has been built in collaboration with the Humboldt University of Berlin, plus co-founder and designer Michael Dettbarn.

( OFFTIME ) - Unplug yourself in a hyperconnected world. This Man Made His Smartphone 'Distraction-Free' Jake Knapp, a blogger and design partner at Google Ventures, knew he had a problem. 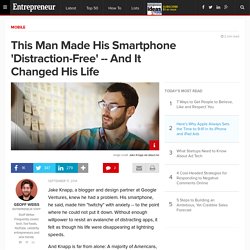 His smartphone, he said, made him “twitchy” with anxiety -- to the point where he could not put it down. Without enough willpower to resist an avalanche of distracting apps, it felt as though his life were disappearing at lightning speeds. And Knapp is far from alone: A majority of Americans, for instance, would rather give up sex than their smartphones, according to a recent study. Pay Attention: Your Frustration Over Smartphone Distraction : All Tech Considered. Our conversation about smartphone addiction continues. 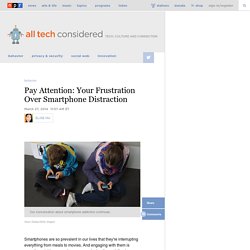 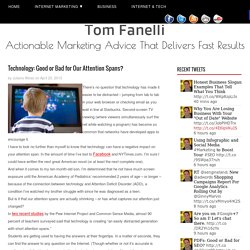 Second-screen TV viewing (where viewers simultaneously surf the net while watching a program) has become so common that networks have developed apps to encourage it. I have to look no further than myself to know that technology can have a negative impact on your attention span. Say it quick, say it well – the attention span of a modern internet consumer. With the rapid adoption of smart phones and tablet computers and the expansion of free Wi-Fi, hotspots, and reliable 3G we live in an always on world. 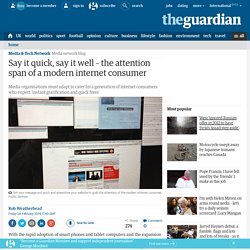 You only have to take a look around you in any public location, be it a coffee shop, supermarket, or on a commuter train to see that people are accessing the web on a constant basis. A 2011 AOP website usage study showed that a UK internet user visited 2,518 web pages across 81 domains and 53 sessions in November 2011. That's a lot of content! This is great for web based businesses as it means their audience is not only growing with each technological advance, but is also reachable 24/7. Is the internet destroying our attention span? - Psychminds Everyday Psychological Discussions. Simply put, yes. 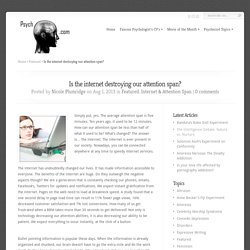 The average attention span is five minutes. Ten years ago, it used to be 12 minutes. A nation addicted to smartphones. 04 August 2011 Over a quarter of adults and nearly half of all teens now own a smartphone37 per cent of adults and 60 per cent of teens are 'highly addicted' to themSmartphones are beginning to affect social behaviour New Ofcom research reveals the extent to which the UK has become addicted to smartphones, with people confessing to using them everywhere from the dining table to the bathroom and bedroom. 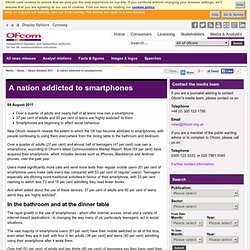 Over a quarter of adults (27 per cent) and almost half of teenagers (47 per cent) now own a smartphone, according to Ofcom's latest Communications Market Report. Most (59 per cent) have acquired their smartphone, which includes devices such as iPhones, Blackberrys and Android phones, over the past year. Users make significantly more calls and send more texts than regular mobile users (81 per cent of smartphone users make calls every day compared with 53 per cent of 'regular' users).

In the bathroom and at the dinner table Work/life balance Generation App Digital decade The resilience of TV. 1. 2013 Mobile Growth Statistics  Here are the latest mobile growth statistics for 2013, a complete indepth summary of where the mobile market is now at, including things like mobile phone adoption rates, smartphone penetration rates, most popular mobile browsers, mobile/tablet sales figures, media consumption habits on mobile devices .etc all with the latest 2013 data on the growth of mobile… The infographic was created by the guys at Super Monitoring. 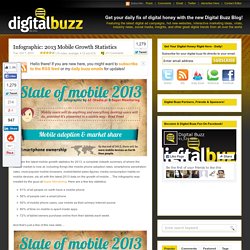 Here are a few key statistics; 91% of all people on earth have a mobile phone56% of people own a smart phone50% of mobile phone users, use mobile as their primary Internet source80% of time on mobile is spent inside apps72% of tablet owners purchase online from their tablets each week. Eye-opening stats reveal the extent of our smartphone dependency. Have you ever resolved not to glance at your smartphone? “For the next 10 minutes, I’m keeping this device in my pocket,” you tell yourself.

Slowly, a minute passes. You reach for the phone, stopping to remind yourself of the agreement—10 minutes. But you compromise, “OK, five minutes.” Mere seconds pass, and your resolve crumbles. If any of this sounds familiar, you’re not alone. For the report, IDC conducted an online survey of 7,444 Android and iPhone users, ages 18 to 44, during a week in March. Mobile Phone Reviews: Infographic: Mobile Devices Overtake Daily Life. With an estimated 1.82 billion smartphones expected to be in use worldwide by the end of the year, Web application performance firm New Relic examined the role mobile phones play in our lives.

For every 300,000 babies born, 1.3 million Android phones are activated, the company reported in a new infographic. Meanwhile, many of those parents are probably playing mobile games or catching up with their social networks while sitting in the waiting room. UK-Connected-Consumer1.pdf. Zmags-cc-survey-web.pdf. Mobile Security. Download PDF version of Generation Smartphone: A Guide for Parents of Tweens and Teens Download phone rules agreement to print it out and review in your smartphone family meeting. Smartphone addiction: The UK’s mobile obsession. Tecmark infographic: Mobile obsession. <div class="no-js-alert"> Please enable JavaScript to view this website. </div> Meet the connected consumer - and reconnect. The term ‘connected consumer’ pops up on virtually every blog that covers digital marketing.

As usual, the danger is that in the end everyone talks about something different when using the term. Furthermore, it’s at least as important to understand the connected customer experience and buying experience if you want to serve the connected consumer well. Let’s take a look. Everyone understands what the word ‘connected’ means so let’s skip that part. Millennials and technology: The natural order of things - Marketing Forward.

I’ve come up with a set of rules that describe our reactions to technologies:1. Anything that is in the world when you’re born is normal and ordinary and is just a natural part of the way the world works. 2. Anything that’s invented between when you’re fifteen and thirty-five is new and exciting and revolutionary and you can probably get a career in it. 3. Anything invented after you’re thirty-five is against the natural order of things. – Douglass Addams, author of The Hitchhiker’s Guide to the Galaxy Over the past few decades, there has been a rapid development of new technology. Think about the above quote by Douglass Adams. Prince Ea - Low Battery. SMARTPHONES TO ACCOUNT FOR TWO THIRDS OF WORLD’S MOBILE MARKET BY 2020 SAYS NEW GSMA INTELLIGENCE STUDY.

Mobile addiction: Why we cannot put down our devices and 7 ways brands can tap into the fix. Global Digital Statistics 2014 (We Are Social) Prince Ea - Can We Auto-Correct Humanity? Social media addiction: the psychology explained - LJ Digital.