Wearing a mask at a riot is now a crime - Politics. A bill that bans the wearing of masks during a riot or unlawful assembly and carries a maximum 10-year prison sentence with a conviction of the offence became law today. 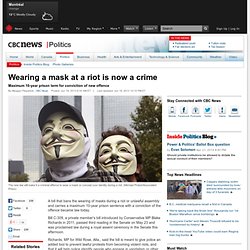 Bill C-309, a private member's bill introduced by Conservative MP Blake Richards in 2011, passed third reading in the Senate on May 23 and was proclaimed law during a royal assent ceremony in the Senate this afternoon. Richards, MP for Wild Rose, Alta., said the bill is meant to give police an added tool to prevent lawful protests from becoming violent riots, and that it will help police identify people who engage in vandalism or other illegal acts.

The bill is something that police, municipal authorities and businesses hit hard by riots in Toronto, Vancouver, Montreal and other cities in recent years, were asking for, according to Richards. The bill creates a new Criminal Code offence that makes it illegal to wear a mask or otherwise conceal your identity during a riot or unlawful assembly. Viral video takes Montreal casseroles protests global. Bill C-309: Conservatives Back Private Members' Bill Targeting Masked Protesters. OTTAWA - The Harper government is throwing its weight behind a private members' bill that would give police the power to arrest anyone hiding their identity during a riot or unlawful assembly. 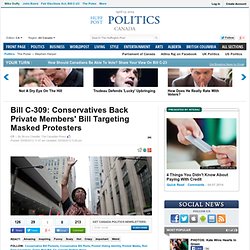 Conservative backbencher Blake Richards is proposing penalties of up to five years in prison or a fine of up to $5,000 for protesters who wear a mask or disguise. The bill, Richards said in an interview, is designed to give police more power to prevent the kinds of riots that have caused so much damage, including the current student riots in Quebec, the Stanley Cup riot of last spring in Vancouver and the G20 protests in Toronto two years ago. "Certainly I've heard of instances where it is legitimate that there might be reasons that someone needs to protest anonymously and this bill certainly still allows for that," said the second-term MP from Airdre, Alta., representing the riding of Wild Rose.

"I think it strengthens the right for peaceful protest. The bill would create two classes of offence. J.J. McCullough: Why the Media Hate-On for Quebec Students? To say there's a pronounced lack of support for the Quebec student strike among members of the Canadian pundit class is a bit like saying there was a pronounced lack of support for icebergs among the crew of the Titanic. 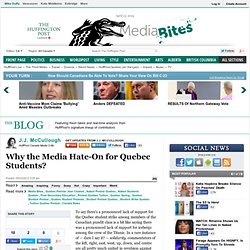 In a rare instance of -- dare I say it? -- solidarity, commentators of the left, right, east, west, up, down, and centre are all pretty much united in revulsion against this children's crusade against rising tuition. What is it about the strike that troubles them so, you ask? Well, let's start with the word itself. "Here's a news flash for the students of Quebec," snarks the Ottawa Citizen editorial board.

"This is a protest," agrees Barry Wilson at CTV Montreal. Other acceptable words to describe what's going on include "riot" and "uprising," or, if you work for the Ottawa Sun, "whine" and "bitch. " "Egypt this is not and Jean Charest, Quebec's premier, is no Hosni Mubarak," says Patrick Lagace at the Globe and Mail. And don't they know it! The myth of $325: Maclean’s and the Quebec student strikes. Okay, so maybe it started with $325. 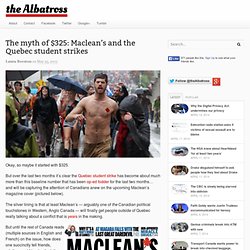 But over the last two months it’s clear the Quebec student strike has become about much more than this baseline number that has been op-ed fodder for the last two months… and will be capturing the attention of Canadians anew on the upcoming Maclean’s magazine cover (pictured below). The silver lining is that at least Maclean’s — arguably one of the Canadian political touchstones in Western, Anglo Canada — will finally get people outside of Quebec really talking about a conflict that is years in the making.

But until the rest of Canada reads (multiple sources in English and French) on the issue, how does one succinctly tell friends, relatives and friends-of-relatives while on vacation for a sister’s wedding what the fuck is going on in Quebec? How can you explain, if they haven’t been here, that the determined looking, red-clad, Arab Spring-esq face on Maclean’s is but one of many taking to the streets each night, for a variety of different reasons?