21.9% of Canadians are immigrants, the highest share in 85 years: StatsCan. The share of immigrants in Canada has reached its highest level in almost a century, according to 2016 census figures released Wednesday. 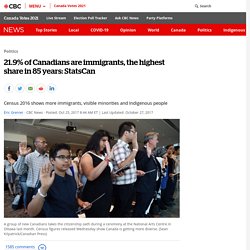 The Statistics Canada data also shows the Indigenous population is growing at more than four times the rate of the non-Indigenous population, reaching nearly 1.7 million in 2016. Hundreds of Canadian children held in immigration detention, report shows. More than 200 Canadian children have been held in immigration detention in recent years, according to a new report from the University of Toronto's International Human Rights Program. 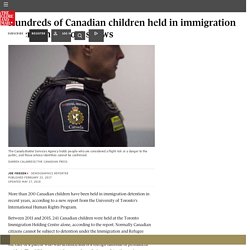 Between 2011 and 2015, 241 Canadian children were held at the Toronto Immigration Holding Centre alone, according to the report. Normally Canadian citizens cannot be subject to detention under the Immigration and Refugee Protection Act. These children became de facto detainees because they were in the care of a parent who was detained and is a foreign national or permanent resident. The children cannot, however, have their own detention review hearings. As a result they become "legally invisible," according to the report. "It's a clear violation of international law for these kids not to have their best interests taken into account as a primary consideration," said Hanna Gros, the report's author and a senior fellow at the University of Toronto.

Story continues below advertisement Days. Immigrants Explain What Shocked Them the Most About Canadian Culture. "We're not a melting pot, we're a cultural mosaic! 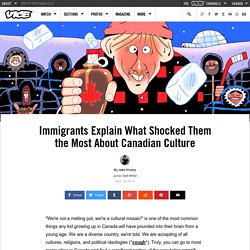 " is one of the most common things any kid growing up in Canada will have pounded into their brain from a young age. Many more apologies are owed to Canada's Muslim community. On Wednesday, Joël Lightbound, Liberal MP for Louis-Hébert, apologized to the families of the six men murdered in Quebec and to the Muslim community in Canada. 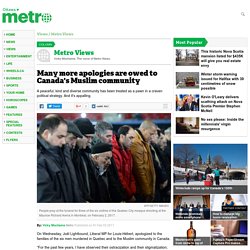 “For the past few years, I have observed their ostracization and their stigmatization; having seen root in the hearts of my fellow men, fear, mistrust and hatred,” he said. “I have done my best to answer them, but I have not done enough.” Many more apologies are owed. Dr. Prof. Hon. Couns. Kellie Leitch, MD, MBA, PP, QC, RSC, BBQ, GST, vows to protect Canada from elites - The Beaverton. 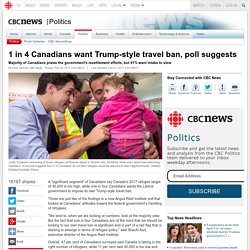 Those are just two of the findings in a new Angus Reid Institute poll that looked at Canadians' attitudes toward the federal government's handling of refugees. "We tend to, when we are looking at numbers, look at the majority view. But the fact that one in four Canadians are of the mind that we should be looking to our own travel ban is significant and is part of a red flag that is starting to emerge in terms of refugee policy," said Shachi Kurl, executive director of the Angus Reid Institute.

Canada the contradiction: What have our blessed lives cost other people? This story is part of The Globe’s coverage of Canada’s sesquicentennial. 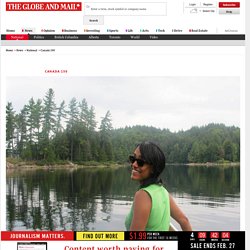 It’s easy to forget, but the Earth is a physical thing, a bright blue ecosystem making a little circuit in an enormous dark space. So a country is also physical, a three-dimensional body of water, plants and dirt, with wounds and curves and a distinct, recognizable profile. Canada is an intensely physical country – huge, green, rocky and wet – but I am new to appreciating this. Until fairly recently, I mainly considered a country a set of ideas: you know, rights and freedoms, crime and punishment, allocation of resources and trying to squeeze into the international spotlight. Vistas and vegetation do not come naturally to me, and for a long time I was totally fine with that. I was born in downtown Toronto and mostly raised on its northeastern edge. When I was four, my dad worked for Bell Canada and took a contract to help develop telecommunications in Saudi Arabia.

Canada can no longer consider the U.S. a safe country for refugees and immigrants: Mochama. It is time for Canada to suspend the Safe Third Country Agreement. 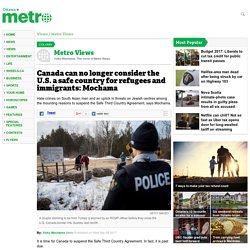 In fact, it is past due. With its policies, Donald Trump’s government has declared open season on Muslims and immigrants. The courts struck down the initial travel ban, yet the Trump administration has doubled down on its commitments. Now the dangerous rhetoric and policy from the West Wing has filtered down to its citizenry. Jewish community centres and cemeteries are receiving threats.

The American government looks set to formalize a system of oppression directed at its racialized citizens and at migrants searching for safety. The uptick in migrants claiming asylum by walking across the border is a direct response to the climate of fear that migrants face under Donald Trump. As Vice reported, asylum claimants who mistakenly apply at an official crossing actually risk deportation back to the original country they are fleeing.

Only a broken process penalizes people for using it.