Poetry. Medieval Poems. Poems during the medieval era were religious in nature and written by clerics. 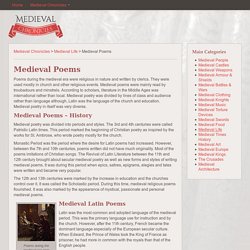 They were used mostly in church and other religious events. Medieval poems were mainly read by troubadours and minstrels. Medieval Period. Medieval Literature (c. 350 – c. 1475) The Medieval period runs from the end of Late Antiquity in the fourth century to the English Renaissance of the late fifteenth century. 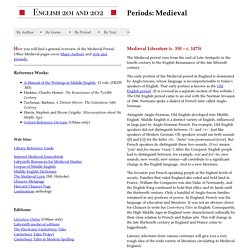 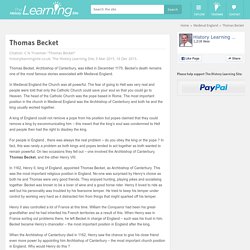 Becket’s death remains one of the most famous stories associated with Medieval England. In Medieval England the Church was all powerful. The fear of going to Hell was very real and people were told that only the Catholic Church could save your soul so that you could go to Heaven. History - Geoffrey Chaucer. The Norton Anthology of English Literature: The Middle Ages: Review: Summary. Middle Ages, Dynamic Culture of the Middle Ages. The European High Middle Ages, which lasted from about 1050 to 1300, evoke for many people romantic images of knights in shining armor, magnificent castles, and glorious cathedrals. 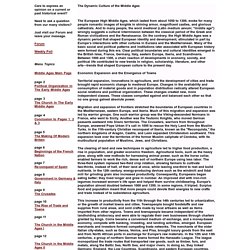 And to many people, the word medieval (Latin medium aevum; "middle age") wrongly suggests a cultural intermission between the classical period of the Greek and Roman civilizations and the Renaissance. Medieval Introduction. By about 1050, the invasions had run their course: the Moslems were in retreat; the Vikings and Hungarians had adopted Christianity and so became participants in western civilization. 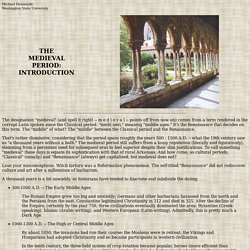 In the tenth century, the three-field system of crop rotation became popular, horses (more efficient than oxen) and iron plows were used, all resulting in surplus food and a better standard of living (Rosenwein 93). By 1000 we've got metal shoes for the horses and oxen to increase their work-lives, tandem harnesses for pulling with the shoulders instead of the neck.

Chivalry and Courtly Love. Code of Chivalry. More often than not, Chivalry was associated with knighthood. 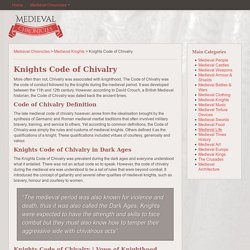 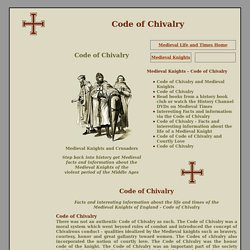 The Code of Chivalry was a moral system which went beyond rules of combat and introduced the concept of Chivalrous conduct - qualities idealized by the Medieval knights such as bravery, courtesy, honor and great gallantry toward women. The Codes of chivalry also incorporated the notion of courtly love. The Code of Chivalry was the honor code of the knight. Medieval History, Castles. MedievalPlus.com The Middle Ages is a period in European history which, along with its adjective ‘Medieval’, was first referred to by italian scholars and academics of the late fifteenth century.

They were basically stating that the society in which they now lived was significantly more civilized and advanced in many ways, than that which had existed during the previous thousand years. This may have been true within certain elite sections of Italian society which had begun to emulate the art and philosophy of ancient Greece, but generally in Italy and Europe overall no all-pervading change had occurred. Historians since that time have, however, used the terms 'middle ages' and medieval as a convenient way to refer to that general period in European history. Geoffrey Chaucer - Author, Poet. 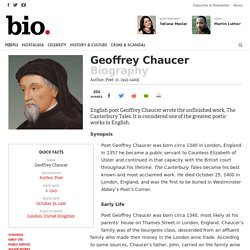 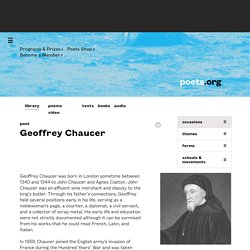 John Chaucer was an affluent wine merchant and deputy to the king’s butler. Through his father’s connections, Geoffrey held several positions early in his life, serving as a noblewoman’s page, a courtier, a diplomat, a civil servant, and a collector of scrap metal. His early life and education were not strictly documented although it can be surmised from his works that he could read French, Latin, and Italian. In 1359, Chaucer joined the English army’s invasion of France during the Hundred Years’ War and was taken prisoner; King Edward III of England paid his ransom in 1360. In 1366, Chaucer married Philipa de Roet, who was a lady-in-waiting to Edward III’s wife.

Chaucer’s early work is heavily influenced by love poetry of the French tradition, including the Romaunt of the Rose (c. 1370) and Saint Cecilia (c. 1373), later used as the “Second Nun’s Tale” in the Canterbury Tales.